Healthy connections with other living things are so damn important for our mental health. And I never truly realized the extent until the day I got a puppy.

If we don’t feel like we have a whole, trustworthy connection with another human — whether from our own anxieties or our apprehension around others for fear of how they will respond to you, or if they show they accept and are there to emotionally support you — then dogs, in my opinion (sorry, cat people) stitch up that gap in your heart.

My heart changed the other day; I went to pick up my little caramel, curly Goldendoodle, “Hagrid.” He’s a cross between an already-existing Goldendoodle — his mum, Nala, who was bred with a golden retriever and a poodle — and his dad, a miniature poodle. So Hagrid is technically 75% poodle, although he looks as though he’ll have the build of his mum.

It’s one of those things, getting a dog, that we’d joked and fantasized about for some time. Since we had and lost our family dog, Levi, some years ago, the only other time my mum felt it would be the right time was when she retired, so she’d have the time for one. Training a puppy is especially demanding. But after realizing how much of a positive distraction this could be for me after recently spending some time in a mental health unit, now just seemed like the perfect time. I was planning to spend the next couple of years working toward being out of mental health services altogether, after almost 10 years, whilst also developing a portfolio for my dream job as an artist.

Two days into picking up the pup? Well, I felt like I’d found the little piece in me I didn’t know was missing. I’m in love with the little lad.

Here are five ways that raising a puppy is helping my mental health so far:

1. I feel needed and wanted.

A dog’s simple wants in the world are to feel loved, safe and to have fun — all of which I’m able to provide, so I don’t feel I can really let him down (unless I become really unwell again, which I won’t let happen). I have taken full responsibility for him at my mum’s house, so remembering to feed him four times a day and deducting some of it when I’m using treats for his training so I don’t overfeed him is important. This takes up headspace I simply wouldn’t have just a couple of years ago because of anorexia nervosa. My head used to be a warehouse full of stacks and stacks of calorie calculations — calculators that were flying round in my brain and crashing into one another.

There’s no way I could have made space for thinking about a dog… and even if I did, I would become over-the-top regimented on when exactly I needed to feed him, and that way of thinking would have actually encouraged my anorexia. If I had to give time or the concentration for Hagrid’s needs, and if I was struggling with offering that anyway due to my starved brain, I would use that as an excuse that I couldn’t eat. I didn’t have the time to plan or calculate every bit of food as anorexia demanded.

Sometimes, for whatever reason, we don’t feel emotionally protected or reassured by people. However, dogs are loyal and as you fulfill their survival and love needs, they pay you back in dividends. After two days with Hagrid, I feel like it’s been weeks because of the intense change in my life and responsibilities.

Not long ago, my average daily spend on a binge and purge (thanks, bulimia nervosa) went from £50 — already with a dollop of guilt, considering this is more than a weekly shop — to £150. I couldn’t cope with my head without continuing to do it; it seemed the only way to relieve the distress in my head. But that’s where dialectical behavior therapy (DBT) therapy will help, which I’ve just started. I also couldn’t bare my body, but again could only find relief from binging for the high, and being sick multiple times a day.

Now, I am investing in another life. I’m investing in a heart, a set of lungs, eyes and ears on four little legs with a fluffy coat, and I want to give Hagrid the best quality of life possible. So now, I need to make sure I have the regular chunk of money aside each month to cover everything from food and dog shampoo to dog training classes. It’s that or the dog becomes neglected and I binge my money away. I think this is where I can kind of “get away” with tricking bulimia: channeling my guilt into the welfare of my little pup, a much more valuable, worthwhile focus for guilt. 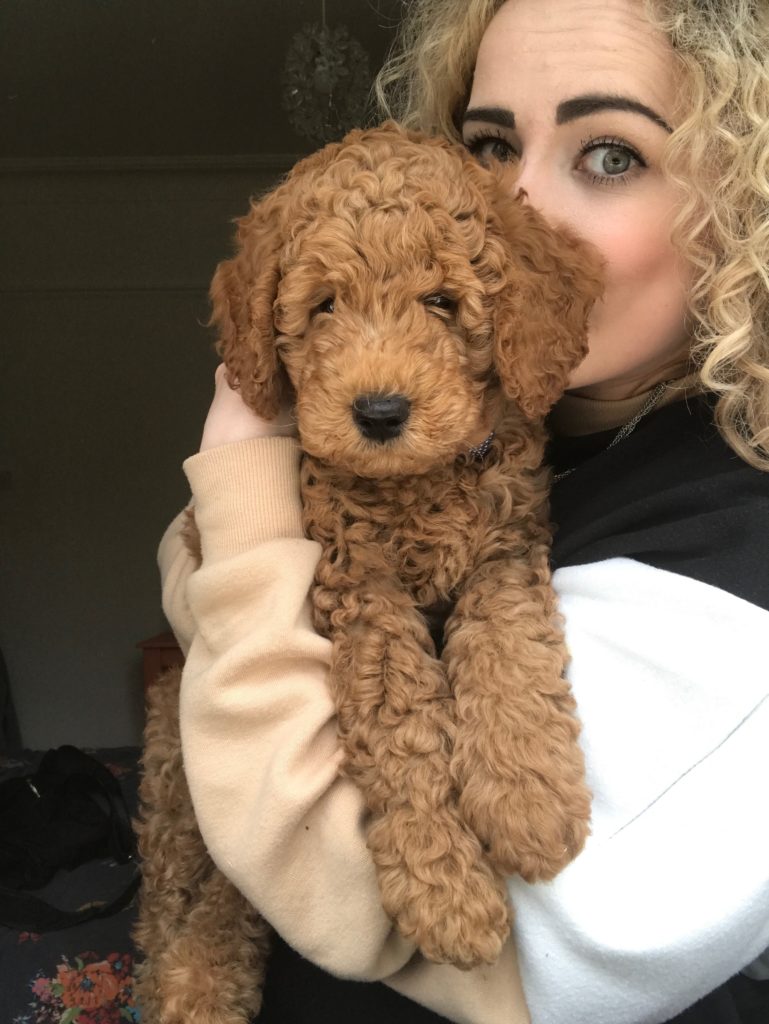 3. There’s no fear of judgment.

My Hagrid doesn’t care if my cheeks are chubby (I don’t think), or whether I’ve had the biggest steak and greasiest chips for dinner… or a plain, boring salad. He doesn’t care if I’m a little heavier or a little lighter. He wouldn’t care if I was anorexic or bulimic. Hagrid doesn’t care how much I achieve any day of the week. He cares about how I make him feel – safe and loved, and that’s that. If I solve that, then to him I am a valuable person.

It makes me quite sad because when I was struggling with anorexia, I became very distant from my old family dog and ratty around him – irritable from the starvation, even though I didn’t feel like I was starving myself. Irritated by being controlled by numbers all day but also irritated by not knowing how to escape that mentality either.

On the first couple of days, I’d been literally eyeing my little puppy like a hawk. I felt responsible for navigating him through this world, and want to be there for every want and need. Does he look like he wants to play? Let’s go have a run in the garden. Should I do a bit of training here so he can learn new skills? Does he look like he needs a wee or poo? If so, quick — to the back door. I want him to learn as efficiently as I can help him too, so he can live his best life. Because of all this focus, I’m not thinking about food as much or worrying about what I’ll have for tea tomorrow, or feeling guilty for not being active enough.

I particularly thought I would worry about this last point a lot, purely because for Hagrid’s first couple of weeks with us, he couldn’t go out walking because he needed his last set of vaccinations. So I quickly became aware I’d be spending most of my days indoors so I could supervise him.

But it’s reiterating to me that being active doesn’t always mean going for a purposeful walk to exercise, or to the gym. Sometimes, it just means actively engaging in life such as playing with the dog in the garden, cleaning around the house and setting Hagrid’s playpen up in my bedroom every evening — it’s in four parts, so multiple trips down the stairs — then doing the same thing downstairs each morning.

Because I value Hagrid’s safety over my compulsion to be active, I feel like I’m more mindful about the here and now.

So far, he’s been the most loving, gentle but playful dog I’ve ever come across. He’s great with all humans so far and I feel like a proud mum because of how he’s making other people feel. He’s settling in very well… clingy at the moment, sitting behind my feet when I’m sorting lunch out in the kitchen and following me everywhere. Realizing his training and his confidence will evolve over time, I’m learning to be patient and to enjoy the moment instead of worrying about the future or the past. Because that’s how dogs think, right?

5. It challenges me not to rigidly rely on routine.

Not going to lie — this one was hard. Due to the “not going out” thing, because the pup needing supervising, and needing to be alert at all times (unless he’s sleeping), I couldn’t really get on with anything that would make me feel “productive” and like I’d achieved anything. I couldn’t really plan anything solid. During this early period, we were still figuring out what he needed and when. It’s usually one of eat, pray, sleep, repeat. The first full day with him was a shock to the system, really. I got a bit of cabin fever, not getting out of the house at first, but then I learned just to love Hagrid’s company. Spending so much time with him is making me feel a reliable connection.

It’s great to have a routine; it keeps us grounded, but it’s also important for our mental health to be able to cope with changes and spontaneity in order to have the fullest life possible. I have gotten used to having a bag of stuff ready with me, to do when he is sleeping and I can’t be of help to him.

I’m not saying getting a dog is the answer to well-rounded mental health, but depending on the time you’re at in your life, and if you have the time to give them — and you’re a “dog person,” of course — it’s a big step forward. Mindfulness is all the rage, nowadays, encouraged upon everyone in order to mentally cope with their world. Caring for a dog and welcoming them into the family can certainly help to harness that skill.

Has having a pet helped you in your mental health? We want to hear about it. Click here to find out how.

Creativity has always been a hand reaching down to me during my worst struggles with mental health. I have battled the yo-yo from Anorexia to Bulimia and back since the age of 18. I'm passionate about writing honestly, to help break down shame and stigma. I have learnt to channel my energy that has fueled negative thoughts, into writing and drawing portraits which have both kept me immensely focused and driven.

49 people are talking about this
Community Voices
Nina @sparklywartanks

13 people are talking about this

Hi, my name is Zelda__. I'm here because

24 people are talking about this
Community Voices

8 people are talking about this

Hi, my name is jennybobby. I'm here because someone in my dreams last night put their hand on the side my face and she wiped away my dried tears from the corner of my eye, whoever it was I want to say thank you.

4 people are talking about this
Community Voices

19 people are talking about this

4 people are talking about this
We use cookies and related technologies to help identify you and your devices, enhance your experience and conduct advertising and analysis. By choosing "Accept", or by using this site, you are agreeing to our use of cookies. You can read more about how The Mighty uses cookies in our Cookie Notice.
Manage Choices
Accept