My Size Does Not Encourage Others to Be Obese

If you’re reading this, you likely have a chronic illness or you know someone who does. Odds are, along with the illness, are feelings about weight.

Some folks have a really difficult time gaining weight, as their bodies don’t absorb nutrition, or sometimes they can barely eat.

Other folks have problems losing weight, or even just maintaining. If you’re on steroids, you’re likely in this category.

As my health declined, I found myself being pushed out of regular sizing and into plus size clothes. While my self-esteem was taking a hit from the weight gain and how miserable I felt, it was compounded by the difficulty I had in finding clothes that fit.

Last week, Nike announced they would be including plus size mannequins in their stores. This was a far cry from the lack of inclusion 15 years ago! What a victory for the plus-size woman to be able to shop in more stores, as more companies realize that larger women need clothing, too!

But the backlash has been unbelievable. It isn’t new, though. So many people argue that we are encouraging obesity by displaying plus-size models and mannequins.

I can guarantee you that the significant majority of people do not choose to become obese. (There are some people who do prefer to be overweight, but that’s a totally different conversation.)

I struggle to find clothes that fit. At size 24 now, nearly everything out there for me has large “old lady” floral prints and really uncomfortable elastic waist bands with pleated fronts. It’s made from polyester, which makes my skin hurt and makes me hot. I have heat intolerance, too, so it’s even harder to find good clothes.

I often want to ask these dissenters, should I instead just walk around naked?

It would solve several issues with scratchy clothes and overheating.

The real issue, though, is that inclusiveness isn’t limited to what we think of as a more traditional disability. We imagine visually and hearing impaired, or those in need of a mobility device. We don’t recognize that obesity is often part of something much larger than a person choosing to overeat and sit on the couch.

For me, it’s a combination of growth hormone deficiency, adrenal insufficiency, and steroid use. My metabolism doesn’t work properly, and my endocrinologist, who is a top doctor at Mayo Clinic, has said on several occasions that weight loss is simply not in the cards for me.

We do live in a society which is too easily offended, and not always about the “right” things. I should not be offended that my children will see fat people, and fat people clothes, and we will refer to people as being “fat” people.

I’m not offended by being called fat because it’s true.

I’m offended that other people are so bothered by my size that they publicly cast judgment against companies who attempt to include me in their marketing.

What I can control, though, is my attitude about it. Often I look at pictures of me and think about exactly how big I am. I don’t like it. I wish I looked like my thin friends.

But my weight does not diminish my value.

I am beautiful. I am smart. I am strong. I am worthy. And my existence is not encouraging your daughters to become obese too. 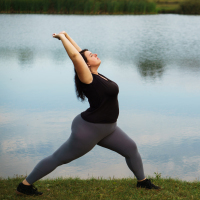