Why Mourning Celebrities Who Die by Suicide Can Be Tricky

Mourning celebrities who die by suicide can be a tricky thing. On the one hand, people have a tendency to share stories, memories and videos of the individual. But on the other, celebrity suicides can lead to an increase in general suicides. This phenomenon is called the “copycat effect,” “suicide contagion” or specifically the “celebrity-suicide effect.”

Last year, research found that suicides in the U.S. rose about 10% in the months after Robin Williams died by suicide. Fink, Santaella-Tenorio and Keyes analyzed monthly suicide totals from 1999 to 2015, then calculated that 16,849 suicides would have been expected from August to December of 2014. In actuality there were 18,690 suicides reported in those months, or a 9.85% deviation from normal. The increase was seen in males and females, but was more pronounced for males and those between 30 and 44 years of age.

This study is the among the first to quantitatively show the effect of a celebrity suicide. There was widespread media coverage of Williams’ death and he was a beloved actor and comedian. It was known that he lived with depression and struggled with addiction. Additionally, Williams’ widow has since claimed his suicide was caused by a specific form of dementia, Lewy body dementia.

Regardless of the factors leading up to his suicide, we finally have a study that quantifies the harm done by exhaustive media coverage and over-memorialization of individuals who die by suicide. There is no question that both Williams’ death and cause of death were newsworthy. However, this research highlights the need for a larger conversation about proper mourning.

The “After Suicide Toolkit for Schools” put forth by the American Foundation for Suicide Prevention and the Suicide Prevention Resource Center, notes the need for balance between memorialization of someone who died by suicide, and the risk of suicide contagion among students. It’s also noted that the risk for suicide contagion is heightened among adolescents, likely due to their propensity for imitative behavior. Schools are suggested to have a standard process for dealing with the death of student  — regardless of the cause of death  —  to avoid stigmatizing suicide.

It is necessary to point out that the study cited only proves statistical correlation, but causation is nearly impossible to prove with a topic this sensitive. Media outlets and social media networks need to take a closer look at the harm done by wall-to-wall coverage of suicide deaths. Years after Williams’ death we’ve lost additional celebrities to suicide, and unfortunately will likely lose more. Suicide contagion is real and needs to be examined further. 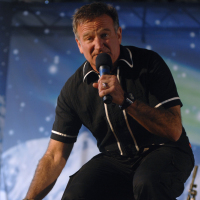