Answering the Question, 'Was Your Eating Disorder Bad?'

I have an eating disorder; well, I am recovering from an eating disorder so to speak. It’s been three years of recovery thus far, two years in which I’ve actually given a damn about getting better and over six years of having one. It’s an understatement saying that I don’t know the ins and outs of my own disorder.

I don’t know everything, but I do know one thing for certain — physical appearance doesn’t depict the “how I am actually doing” part of the disorder. It’s something I hear constantly. The last time I heard it was last week on a TV program, the common question: “So, did your eating disorder get bad?”

I’ve heard this question quite a bit, and I have gotten to the point of asking what it exactly means to those not in the universe of mental health education (which contains a whole lot of “what one should and shouldn’t say to someone with a mental illness”). The common response seems to be, “Well, were you skin and bones?” It was the second comment made on that television program, FYI.

In my case, and in this definition of “bad,”’ yes, it was. In the retrospect of physical appearance, I was skin and bones once. I was what is assumed to be “bad.”

If I ever get asked I say yes, it is true my physical appearance was once ghastly. I sometimes even entertain the idea of how emaciated I was to others. It sounds sick and it is; it is once again the disorder’s tight grip within me — feeling pride for something that I rationally know is nothing to be proud of.

The most I have ever engaged with eating disorder behaviors was when I was weight restored. That time of my life was one of so much pain. Hardly leaving my house, I was at a breaking point. When I measure my levels of how crappy I felt in comparison to other rough patches in my life thus far, that was the point when crappy feelings were at their highest.

Our bodies survive on food among other things. Without proper nutrition (which can happen in all types of eating disorders and weights), so many of our bodily functions are compromised.
Eating disorders manifest in many forms and in most cases, a sufferer never reaches an underweight BMI (body mass index). So when we define “bad” based on the outward appearance of a sufferer, it leaves the majority of sufferers out of the equation.

When we look over other illnesses, there are hardly many that need to be asked if it got bad. It is just assumed that to have that particular illness it is bad enough. It’s the same with eating disorders.

So from now on, I refuse to say just “yes” anymore to “was your eating disorder bad?”

I refuse to entertain the assumptions that have been so falsely made about eating disorders.

I refuse to flatter that disordered part of me, which is still so strong, with the pride it feels for reaching a physical image.

Share
or  Copy Link
Link copied to clipboard.
Be first
148 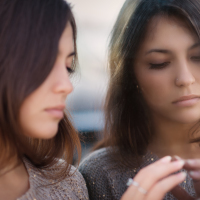