Halloween used to be my favorite holiday. When I was 5 years old, I dressed up as a Dalmatian puppy; it was a family costume that had been handed down since my oldest cousin could fit into it. There’s a picture of me and my brother, dressed as a Native American, in a yearbook somewhere, my brother smiling his fake smile, while I wear my cheesy one.

I was a clown once, and Esmeralda from “The Hunchback of Notre Dame,” and a Geisha; when I was older, I dressed as a sexy pirate, a fox, a ladybug; last year, I was a scared version of the person I am today, and the person I was before May 5, 2018. This year, I’m more understanding of who I am, why I react to this season the way I do and why I need more naps now rather than during the summer.

When I was 8 years old, I convinced myself I could watch “Child’s Play” on my own; that I wasn’t afraid of him, that I was brave.

I was naïve, and it would soon stick with me for the rest of my life. My mother saved me by asking if I wanted to go and check out my aunt’s new apartment before I was halfway through the movie and I jumped at the chance. We left, and I enjoyed a relatively interesting trip to my aunt’s apartment. I don’t remember everything from that night, but we had to have stopped somewhere on the way home because I remember my mother telling me to go ahead and enter the house, which we did through the garage door while she grabbed a few things from the car.

The house looked unlived-in for the first time I could ever remember. Every single light in the house was off — even the one we always kept on over the kitchen sink. I didn’t think anything of it; I just entered the garage through the door, turned right and opened the back door to the house. As I opened the back door on the landing between the basement and the kitchen, a hooded black figure came at me from the basement before I could turn on the light. I screamed and ran back into the garage, knowing I’d be safe if I made it back to my mother, but before I could get back to her, another hooded figure came at me from the garage. I couldn’t see anything; I don’t remember much else after that, but what I do remember is vowing I would never watch “Child’s Play” again.

The two hooded figures? My brother and my father. I forgave them — “it was just a prank” — but it still haunts me to this day. Of course, ever since then, my friends and family have always told me I overreacted to the prank, that “Child’s Play” wasn’t even scary; I’ve heard nearly every excuse in the book to explain away my fear, but it never stopped it from being real.

When I was robbed on May 5, 2018, I felt the same general kind of fear I felt when I was 8 years old. I felt frozen and unable to run to safety. I felt as if I was living a nightmare I’d had so many different nights in a row. Even before 2018, Autumn was never my season after that night of being scared by my brother and father.

I had to avoid stores around Halloween time, knowing that “Child’s Play” would almost always be one of the top displayed horror films since it was such a “classic.”  The mall in my local area always had the doll displayed in the window from the last two weeks of September until November 1.

Now, I avoid stores altogether at Halloween. The spooky factor increased the day I was truly attacked by someone. My post-traumatic stress disorder (PTSD) goes into hyperactive drive during the season of autumn. I am never more relieved for a new day than I am the day after Halloween, when I see the stores starting to take down the Halloween décor and/or move them to the clearance aisle.

And now, I have a son. He’s four and super excited to pick out his own Halloween costume this year. It’s a moment in my life I will not be able to experience because I am unable to enter a Halloween store, let alone any store selling Halloween costumes. When I go to take him trick-or-treating, I have to go with another adult because I feel as if I need to be babysat while I watch my own child go trick-or-treating.

My illness keeps me from enjoying October. I despise the month; my anxiety skyrockets, causing me to be more exhausted than I usually am, and causing me to miss out on even more time and memories I could be spending time with my husband and/or child, depending on who is available to spend time with at the time. I’m usually able to make it up to them, but the fact I need to make up time with them because of my hyper-anxiety is upsetting, angering and just plain tiring.

How do I say this to my son?

How do I live through autumn?

Photo by Aral Tasher on Unsplash

Share
or  Copy Link
Link copied to clipboard.
Be first
53 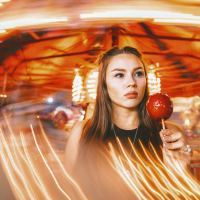