Nothing can fully prepare you for the day you receive a medical diagnosis for your child. I still remember ours as if it were yesterday. I was sitting in a room, excited to see my baby on the ultrasound screen, while simultaneously creating a grocery list in my head and talking about dinner plans for that night with my husband. When the sonographer left the room to get the Medical Director of the SSM Health St. Louis Fetal Care Institute to come in and look at our scan, I felt a pang of fear.

“There’s something wrong with your baby’s heart,” he gently said.

Right then, our lives were forever changed. We received news that our baby has Tetralogy of Fallot, a series of congenital heart defects. I would continue to hear those words whispered in my ear at every appointment thereafter, always holding my breath bracing for more bad news. At 32 weeks into my pregnancy, we received more devastating news when they found an omphalocele and congenital diaphragmatic hernia. We were now facing not one, but three life-threatening conditions.

For most parents, the thought of taking their child to the doctor brings to mind regular well visits and the occasional treatment for ear infections, rashes and stomach viruses. But after going through a medical trauma with their child, it is common for parents to feel anxiety when they visit a hospital or new specialist — which is one of the first signs of post-traumatic stress disorder (PTSD). After experiencing illness or trauma with their child, parents continually brace themselves for the unknown – wondering when they’ll experience the next hospital stay, the next set of bad news, or the next time they can finally breathe and relax.

After my daughter was born, I only got to hold her for a few minutes before she was immediately transferred to the neonatal intensive care unit (NICU) at SSM Health Cardinal Glennon Children’s Hospital. A true fighter from the start, she only spent one week in the NICU. She had open heart surgery to repair her heart condition when she was 4 months old and just two months later, she underwent emergency surgery to repair her diaphragmatic hernia and omphalocele after experiencing some unexpected complications.

The day of her emergency surgery, I was dressed for work, but wanted to make a quick stop by the pediatrician’s office to have them take a look at my daughter and calm some of those fears in the back of my mind. I fully expected that we would be given some antibiotics or be told just to keep monitoring her. But the next thing I knew, we were told to immediately take her to Cardinal Glennon for imaging. Before I knew it, we were being admitted for emergency surgery. The guilt seeped in and has never truly left. Why didn’t I have a bag packed? How could I not have had a doctor look at her sooner? How did I not know what was going on with my child? I should have known. I should have done something more.

Guilt is also a common symptom of PTSD. Many parents feel guilt, hopelessness and shame over the things they did or didn’t do in an emergency. I’m still not quite over everything that happened with my daughter, and I may never be. The memories, fears, unexpected tears and worst-case scenarios all play out in my mind when I hear beeping noises from machines or unexpected cries from my daughter, or even as we’re waiting for the results of any new tests. 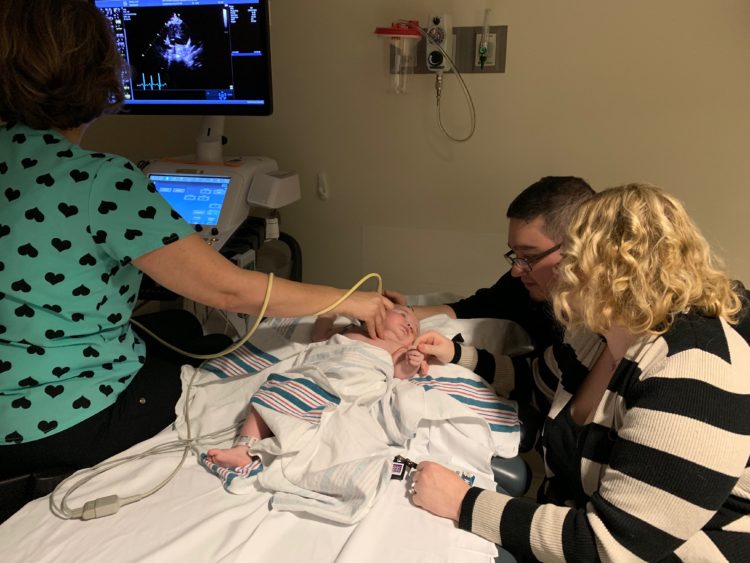 Six weeks after her emergency surgery, I knew I needed help. It was the calm after the storm — that time when the adrenaline from surgery and recovery had worn off and I began to feel all the emotions I’d been putting off. I had an emotional outburst when she was crying one night — probably from teething or something equally “normal” — but my mind started racing to all the “what ifs” and orchestrating an emergency plan in my head if it came to that. The emotions and anxiety carried over to the next day where I couldn’t have a conversation with anyone about Lily without crying.

I reached out to a counselor to work through some of these feelings and emotions. It was then that I heard that I was experiencing PTSD. I never thought I could experience PTSD because I wasn’t the one who physically went through the trauma. But I soon learned that a parent takes on the weight of the world when their child is fighting for their life, and that weight can get heavy on their shoulders. Studies have shown that PTSD has been reported in 21 to 23 percent of parents whose children have been in either the NICU or PICU, and mothers are more common to experience it than fathers.

According to the Anxiety and Depression Association of America (ADAA), symptoms of PTSD include:

• Overwhelming guilt or shame
• Flashbacks
• Nightmares
• Severe distress when reminded of the trauma
• Words, objects or situations acting as triggers to remind the person of the event
• Disruptions in everyday routine
• General memory problems
• Hopelessness about future
• Emotional numbing
• Feeling detached from others
• Avoiding certain places, events or objects that remind a person of the trauma
• Challenges recalling important parts of the traumatic event
• Avoiding thinking or talking about event
• Trouble concentrating
• Easily startled or frightened
• Engaging in self-destructive behavior
• Constantly tense or on edge
• Irritability or anger
• Trouble sleeping
• Hearing or seeing things that aren’t there

It is important to know the symptoms of PTSD, and that you should never hesitate to reach out for help. As a mother of a medically-complex child, I needed to learn to take care of myself so I can take care of my child.

A version of this story originally appeared on SSM Health’s blog.