How I Manage Disturbing Thoughts

One of the most significant breakthroughs I had when experiencing disturbing thoughts was to recognize that these thoughts are a product of psychosis and not that of my mind. It started when I began reflecting on why I was having suicidal thoughts. For an extended period, I would experience suicide ideation several times a day. Despite almost 10 years of this happening, there was never a single time that I planned or attempted suicide. There seemed to be a distinct line drawn between thought and action.

I never planned or attempted suicide because, despite the endless barrage of thoughts about it, my life was OK. It wasn’t anything to brag about, but I was mostly content. This realization helped me recognize that there is a detachment from “sane” and “insane” thinking. “Sane” thoughts are products of who I truly am. “Insane” thoughts are products of what I fear most in humanity, personified by my voice. Suicidal thoughts were prevalent likely because the most likely person to kill me is myself — and I don’t want to die.

The second biggest fear I have outside of the safety of myself is the safety of my loved ones and people in general. As a result, another type of disturbing thought I get is flashes of hurting others. Much like not wanting to kill myself, I have no reason or desire to hurt others. But, the thoughts happen just the same. I spent 10 years having suicidal thoughts and never once planned or attempted to kill myself. Knowing this has made thoughts of hurting others much more manageable.

I recently began talking to another person experiencing psychotic symptoms, and I liked the advice that I gave them:

If I could give any advice, I’d say don’t let the thoughts you get be judgments on yourself. They are not who you are. They are just waking nightmares of what some people are, almost a hallucination of you in their shoes. It’s almost a kind of insight. You can now see more clearly what humanity is capable of, and how easy it can happen. It’s quite disturbing, and a big reason why I can get extremely polarized by things.

Having psychosis indeed can be an insight into the horrors of which humans are capable of carrying out. I have seen in so many schizophrenic people their desire to protect others. They are fanatically passionate about protecting not just their loved ones, but humanity as a whole. On the rare occasions that schizophrenic people become violent, it is my opinion that they are acting out aggression on those that they see as a threat to humanity.

Because we are assaulted with nightmarish thoughts, thoughts that are not our own but are implanted within the context of our daily lives, we know that with a figurative flick of a switch, anyone can go from an average person to abhorrently evil. It fuels our paranoia and distrust, distracts us endlessly in our daily lives, and keeps us awake all night. When I draw the line between thoughts and actions, I am engaging in a daily act of trusting myself and trusting humanity.

Photo by Oscar Keys via Unsplash 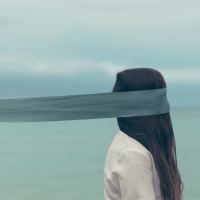