How PTSD and Chronic Illness Affected My Engagement and Marriage

I’d been vomiting for three months straight, and I was sick from the rain and lack of sleep. An internet stranger had been messaging me once a day on a dating app and randomly asked to meet. Because he had been so distant, I really didn’t feel like meeting him on top of my physical maladies. I was talking to him out of boredom when I had the time, but I went into the freezing rain and drove to the burger joint I selected to meet who I had designated was just a really shy guy.

And he was a shy guy. In a cute way, to me. I walked up to Smashburger (I didn’t believe in anyone dropping big dollars on the first meetup) and there he stood, pale and shivering under the neon sign, and he looked terrified. Like he didn’t want to be “that guy” again. I recall now what he wore that day was the outfit he wore yesterday — a black long-sleeved pullover and pleated thrift store khakis.

What’s important about yesterday and today? Yesterday, I had my second psychotic break in our marriage, and today is our one-month anniversary of marriage.

We dated a month shy of two years, and through it all, a multitude of tragedies happened to us. The old folks don’t lie when they say marriage ups the ante. It gets harder, but we weren’t expecting things to go to level 10 right after we said, “I do.”

Four months before our wedding day, I woke up in severe pain. I was screaming, crying for a reason I couldn’t pinpoint. I felt like snakes were moving underneath my skin, and my then-fiancé covered me with ice packs and spoon fed me in bed. Eventually, he took me to a doctor, who diagnosed me with fibromyalgia. We had no idea how much our lives would change.

My body rapidly deteriorated and I gained a significant amount of weight. A month out from the wedding, I walked with a cane and could not get out of bed. My family made the decision to move the wedding from a 30-acre venue to our house so I could lie down during the wedding, and not have far to walk so I could pretend I never used a cane.

At this time, I was in graduate school, and had to take incompletes. I could not sit at a desk with a computer. Slowly, the stress cauldron was bubbling, and it would eventually overtake me.

Then, three days before the wedding, the doctors said I most likely had lupus as the fibromyalgia meds were not working. Distraught, I imagined a desolate life. I wasn’t even thinking of the wedding until the day it happened.

My family put on the wedding themselves, with my dad officiating, and my sister and mother decorating with some family friends. The community really came together for us, and was a big help. With simple do-it-yourself (DIY) decorations and a $30 trip to the salon with an old roommate orchestrating my makeup, I was a bride.

Through it all, despite my groom’s steadfastness to me — his sending flowers, multiple phone calls a day and his reassurance he wasn’t going anywhere — I was afraid he wouldn’t show up at the altar after my recent diagnosis. But he showed up smiling at me, and we had our magical first dance in the family room where I grew up.

Even when my mobility has been impaired, my husband has always danced with me. When I could not move my feet or stand, he would pull me up, and I would hold onto his shoulders and we would sway in our own living room every Saturday. Our first dance for our meager nuptials was magical, for all the symbolism it shared with those present. We made it this far, and we were going to dance with each other the rest of our lives.

Throughout our engagement, I sought out other people with my illnesses. They were always impressed with how we stuck by each other. One woman told me if we made it through the beginnings of my illness, we could make it through anything, and now I cling to her kind words.

On top of my physical illnesses, I live with post-traumatic stress disorder (PTSD). I have trauma from my younger years and it was triggered on my honeymoon. When we came home, I became catatonic. Neither myself nor my husband saw it coming, and I became so afraid that I ran. This is likely due in part to all the stress I was under in the months previously.

Eventually, I came to my senses and reached out to him, explaining I was having a psychotic break, or a break from reality in my mind in a bad way, and I thought my past traumas had to do with it. He gently explained he understood, simply wanted to know I was safe and wished I was home with him. He missed me, and needed to know I would be OK.

I reached out to support groups and found other women with mental illnesses had also run from loving husbands to be welcomed back to them with open arms. They had been married for over a decade and had multiple children together. This gave us hope as we tried to relaunch our marriage.

I want to make a special note of the above — just because you have a mental or physical illness doesn’t mean your life has to or gets to look like everyone else’s, especially your marriage. It’s OK if you have to adapt and your marriage doesn’t look like your grandparents, or your aunt Cindy’s. Reserve judgment for no one, even yourself. For now, my husband and I will wait for each other, because we always have. Our vows were the traditional, “For better or worse, in sickness and in heath.” 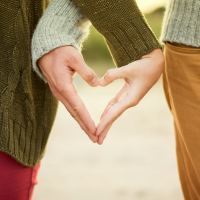