A drive to the emergency room down the street from us filled with uncertainty of finding any answers about our son’s worsening condition, quickly morphed into the unexpected discovery that his brain scans were “very abnormal.” He was admitted to the intensive care unit (ICU) a few hours later, with brain surgery scheduled first thing in the morning.

The surgical placement of an external shunt for hydrocephalus was designed to reduce pressure in his brain, which would hopefully bring about an improvement of his symptoms. But an extended episode of unresponsiveness later that day was alarming, and the neurosurgeon ordered another CT brain scan for 5:00 the next
morning.

When the doctor appeared in our room before 7:00 a.m., I knew in my gut it wasn’t good news. He showed us on the screen the large hematoma that had formed in the left forehead area. He wasn’t sure what had caused it, but it needed to be removed right away. Nothing about Daniel’s case was “straightforward,” he commented as he strode off for the operating room, and within 30 minutes the transport team was wheeling our son down to emergency surgery.

We whispered goodbye and assured Daniel he was going to do great, but as the double doors of the operating room closed behind him the reality of uncertainty hit.

And the tears fell. Back on the couch-bed in his empty ICU room.

Here’s what I didn’t expect to feel, but did:

1. I didn’t expect to feel the quietness so deeply.

The regular beeping — and occasional warning alarms — of his monitors had become the rhythm of the room, keeping track of all his vitals, bringing the nurses in to check on him and make adjustments as needed. Now the beeps were distant, coming from adjacent rooms, with nurses passing by his open door on their way to attend to other needs. Our precious 14-year-old son, the pediatric patient of room 5028, was no longer here.

2. I didn’t expect to imagine life without him.

As the eerie quietness of the room and resulting seriousness of his situation sunk into my bones, I knew that our future with him was not guaranteed. This empty room seemed to symbolize how quiet life would be without him, and I grieved the thought of possibly saying a permanent goodbye to him long before we were ready. His life added so much to mine, and I couldn’t imagine what life would be like if his was taken away.

3. I didn’t expect to question if we had made the right decisions.

All along, we had thought his recent regressions had been linked to complications with spina bifida. What if we had thought to ask for a brain CT scan earlier? What if any of the medical visits over the past six weeks had prompted someone to check into brain abnormalities, instead of just considering tethered cord issues with his neurological symptoms? I realized in the quietness of my soul that those guilt/blame-producing questions needed to be put to rest. Dwelling on them and traveling down the path of second-guessing would not be helpful, and I could make the choice to dwell on better thoughts.

4. I didn’t expect to feel surrounded by the prayers of others.

Knowing that our Caring Bridge posts could reach people immediately, I was comforted by the prayers I knew were being lifted all across the globe while Daniel was on the operating table. Even though we were alone at this moment in the ICU room, we weren’t alone in bigger scheme of the medical crisis because of those who had committed to coming alongside us in our time of need.

5. I didn’t expect to experience peace about the doctor being baffled.

Our stop by the Ronald McDonald House for a bit of breakfast after leaving the operating room, and before returning to the hospital room, brought an unexpected encounter with a dad in the kitchen. After sharing our stories with each other, he asked if he could pray for us and for our son. So as the three of us gathered together, holding hands beside the counter with his half-cut pineapple on the cutting board, my husband and I experienced a stranger reminding us who was really in control. The doctor might have no idea what was going on with Daniel’s brain, but God did. And we could put our trust in him. Now, back in the empty ICU room, that reminder of God’s sovereignty filled me with renewed faith.

Daniel ended up going through a third surgery, two days after the emergency one, to place an internal shunt and to biopsy the abnormal tissue. His diagnosis turned out to be Central nervous system germinoma; difficult to determine from early scans because of its unusual location in the brain.

Oncology was able to schedule him for his first round of chemo right away, and this week we’re handling post-chemo side effects. Having entered a new world called cancer, we have lots to learn from those who have journeyed before us. One of my biggest takeaways so far is how courageous my son is.

As he’s napping on the couch now, I’m remembering his empty ICU room and reflecting on being in the middle of a medical mystery. Some of the uncertainty then now has answers, but we’re continuing to hold the tension of the still uncertain.

Share
or  Copy Link
Link copied to clipboard.
Be first
58 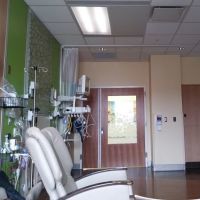