How Being Undiagnosed and Misdiagnosed Affected My Bipolar Disorder

I think I’ve had bipolar disorder since the day I was born. I was 7 years old when I was first diagnosed. How do they diagnose a child that young with bipolar? How do they decide? I’m not sure, but they were right. Unfortunately, I’ve been misdiagnosed and mistreated for years. Somehow, that diagnostic assessment from when I was 7 got lost along the way.

By the time I was 16, things were really, really bad. I was treated for major depressive disorder (MDD) and generalized anxiety disorder (GAD). I knew it was more than that. All they would treat me with were antidepressants, which are often not proper treatment for bipolar disorder. I tried to tell doctors it was more so I could be medicated properly, but they didn’t hear me. From my experience, they don’t like to diagnose teens with something like bipolar disorder.

So, I struggled. I lost valuable treatment time being medicated improperly and being unmedicated. Medications aren’t everything, but I’ve learned for me, they are necessary.

By the time I was 19, I was in complete denial. I thought, “Well, they didn’t think I had it when I was a teen, I don’t have it now.” I continued to be unmedicated, and it goes without saying, that did not go well.

I’m 23 now, and I was finally officially diagnosed (again) with bipolar 2 disorder in November of 2019. It’s something I’ve known for a very long time, but it’s still something I have to process and I’m working on accepting.

I don’t know who I am without my illness, because I’ve always been unwell. This is what I know and who I see myself as. I’m not sure what wellness looks like for me, but I’m willing to try. I almost died in December 2019 after a suicide attempt, but I’m still here. So, I will fight. I will struggle for the rest of my life, but I’m beginning to see maybe my life can be more than this, and just maybe, I can be someone who’s not just bipolar.

Share
or  Copy Link
Link copied to clipboard.
Be first
185 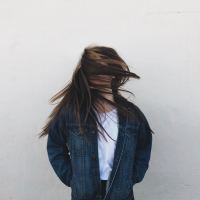