How I Realized My Childhood Fears Were Really OCD

I remember the bright, white steeple on our church, pointing up toward the sky with a cross at the very top. This was where I spent each Sunday, the green, scratchy fabric covering the pews making the back of my legs itch while I listened to the preacher from the front row. I was raised a Christian and got saved when I was 9, meaning I had Jesus in my heart and I didn’t ever have to worry about going to hell. Still … every week, when it came time for the preacher to invite everyone to the altar to pray for forgiveness and receive Jesus, I felt this palpable pull toward the front of the church, and one thought played over and over in my mind…

“What if I’m not really saved?”

Fast-forward about 16 years. I’m 25 and just coming off of a career loss. I’m into “Deadpool.” It’s my current thing. I’m buying comics and T-shirts and counting down to the movie, researching “Deadpool” lore and making him my business. My mom says to me casually one day, as she sits at our dining room table on her lunch break from work: “You like ‘Deadpool?’ That doesn’t seem like a very Christian thing to like.”

I began a spiral downward that would consume my life for the next few months, finally prompting me to seek medical help for my mental health conditions, and begin a journey I’m still on today.

What my mother’s comment triggered in that moment was a mystery to me at the time. All I had to go on was a suspicion that I had been struggling with depression and anxiety for years. Most of my life, I had seen myself as an optimist. I didn’t identify as someone who let sadness bring me down, or as a worrier, at least not on most occasions. I saw myself as the positive one in my group, and overlooked what I had not yet come to accept as a difficult childhood. It wasn’t until I started graduate school for the first time that I felt a change in myself. The monumental increase in stress and responsibility, and my dire need for perfection and good academic performance, combined to bring on my first depressive episode. I would hint at it sometimes when talking with other people, but it took years to admit to myself and others that I was “depressed.” Even when I could finally accept it, I didn’t seek help.

What my mother said to me about “Deadpool,” nearly three years after that first depressive episode, made me worry that liking “Deadpool” might mean something about me. It might mean I’m not really a Christian, or not a “good” one at least, or even worse … what if it meant I didn’t even believe in God and I wasn’t really saved? Suddenly, I was back at the altar as a child, getting saved over and over again just to make sure I felt good until the next week. I identified these feelings as anxiety. Having this massive breakdown, where I suddenly couldn’t allow myself to do anything but sleep for fear it was a sin, at least prompted me to finally seek medical help. I went to a doctor, told her I was depressed and anxious, and was summarily prescribed an antidepressant. It was the first of many.

Over time, I explored what had happened to me more in-depth. I studied these disorders I suddenly owned, came to understand them better and eventually went back to school to become a mental health counselor so that I could help others with their struggles. I thought my journey was complete. But during those two years of grad school, I experienced more incidents where a single comment, suggestion or thought would plant itself in my mind, and I began to realize that I wasn’t just depressed or anxious, but might also have obsessive-compulsive disorder. That was why I couldn’t let go of certain thoughts or fears, and did sometimes strange things (even if they didn’t make sense) just to feel better. Suddenly, getting saved over and over every Sunday as a child made sense. Making my father sleep on the couch, and check the locks on our doors every night to prevent a burglar from coming in, made sense. In an instant, my childhood was redefined.

I found a new psychiatric provider, and again asked for help. I shared my suspicions with her, and she officially diagnosed me with OCD and changed my medication to one that was more targeted for OCD-related symptoms.

Now, a year out of school and deeply in love with the man I’m going to marry, I find that I obsess less over religious matters and more over “us.” Not only have the number of disorders and the type of medication I take changed, so have the subjects of my obsession and the triggers for my anxiety and depression. So has the amount of time it takes me to admit I need help, and ask for it.

Having mental illnesses has caused me to reevaluate my life, to identify patterns and early signs in my childhood that I thought had no meaning. What changes will come in the future, what new things I will discover? What times of stress (a war, a death in the family, a viral pandemic) will trigger something new? All I know is that I can — and will — roll with the punches. People are never static; why would our mental health be?

Photo by Ben White on Unsplash

Share
or  Copy Link
Link copied to clipboard.
Be first
84 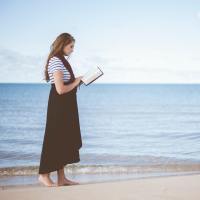