3 Things to Remember If Celebrity Sexual Assault Accusations Are Triggering

Recently, a slew of celebrity sexual assault allegations have been made implicating a myriad of men including comedian Chris D’Elia, actor Ansel Elgort, singer Justin Bieber and actor Cole Sprouse. (All have denied the accusations made against them, and you can read about each individual case by clicking on their names.) As a survivor of sexual trauma, when accusations of sexual assault are made public, part of me feels celebratory, almost righteously giddy. I’ve been waiting for society to finally take notice of what has been happening forever, and to not just make amends, but to address the systemic normalization of sexual exploitation as a means of exerting power and taking advantage of others. In a way, it’s like I’m being vindicated and getting closure for my own assault by living vicariously through the court of public opinion.

However, being bombarded with news of sexual violence so regularly can also heighten and trigger symptoms of post-traumatic stress disorder (PTSD) that myself and many other survivors of sexual assault deal with. If you feel overwhelmed by what seems like a clear uptick in sexual assault accusations being made publicly, you are not alone. What you are experiencing is entirely normal and to be expected. Here’s why:

1. You’re not alone if news like this triggers shame or guilt.

Survivors often feel a lot of shame/guilt about being assaulted. Whether it happened in childhood or as an adult, most survivors question how they may have contributed to their own assault. They also feel some level of shame for not telling someone about it sooner. I know for myself, I struggled with this for years, which is why I repressed the memories of my abuse so far down it was as if it had never happened.

It wasn’t until I finally felt safe with a therapist that I could allow those memories to resurface, and when they did, I felt so ashamed that I wanted to sink into the earth and disappear. I questioned everything from my clothing to how I acted to why my body betrayed me and felt aroused. Survivors often get questioned about their alcohol consumption, if they knew the perpetrator, why they didn’t fight back, etc. It’s as though the onus on preventing assault is on the victim. And if we didn’t tell anyone, we are conveniently scapegoated so as to absolve others from feeling any guilt or having any responsibility for not protecting us or stopping it if they saw it happen. I say enough is enough. Survivors are never responsible for their assault. Period. The shame and guilt belong squarely with the perpetrators and anyone involved who either wasn’t there to protect a minor or to step in if they saw something happen on a college campus, for example.

2. You’re not weak if news like this makes you experience flashbacks.

Reading or hearing about details of sexual assault can trigger our own memories to resurface, even if we’ve done the hard work of trauma therapy. I don’t often get triggered anymore, but once in a blue moon if a particular case shares similarities to my own abuse, I find myself experiencing intense physical memories of my abuse. It’s almost like it’s actually occurring in the moment. All five senses are engaged. These moments are exhausting because they immediately throw our bodies back into fight/flight/freeze mode and stress hormones flood our bodies. When this happens, it’s critical for survivors to take a step back and focus on self-care. We may need more sleep, some positive distraction, connection with healthy supportive others and to take a step back from media so we can regroup and rebalance our limbic systems.

So many of us have repressed our anger about being sexually assaulted because as a society we tend to discourage people from feeling anger. Forgive and forget. Let it go. Get over it. For some bizarre reason we find anger scary and dangerous. I’m here to tell you that it’s not. It’s normal, healthy and adaptive. Anger exists to help us recognize when something has happened to us that is dangerous, toxic or against our needs. Anger in and of itself isn’t a problem. How we channel that anger is key. When I hear about others being sexually abused or assaulted, I become enraged, not just for them or myself, but at a society that has perpetuated and normalized the use of power as a means of exploiting others. I get fueled into action. I find myself frantically posting on social media, blogging, reading and otherwise trying to advocate for survivors.

All of this can be fine as long as I don’t allow it to suck me down a rabbit hole of reading negative comments and engaging with those who still don’t get it. Then I just make myself feel ill from raging at the injustice and ignorance of the world. It’s important to temper our desire for justice with the reality of how slowly change occurs on a macro level. It’s important to remind ourselves that in just a relatively short amount of time the number of sexual predators who have been accused and actually held accountable for their actions has increased exponentially. Yes, there’s a lot of room for improvement and opportunity for educating others about sexual trauma, body safety and consent, but we’ve also made great progress. We have to hold onto that tiny glimmer of hope for true change.

And one final note, if you are a survivor that feels torn about whether or not to come forward with your story, just remember, it’s your story to tell or to keep private. Ultimately not everyone can or should go public. There’s no rule saying you have to share anything with anyone. I can think of many reasons you may choose to keep your story to yourself and that’s OK. Don’t ever let anyone else make you feel obligated to share something so personal and so life altering. Everyone’s healing journey looks different, for some it can be cathartic to share publicly. Doing so doesn’t make your story more or less valid than anyone else’s. Sexual trauma isn’t a competition. We all deserve to heal and we all deserve to be supported in whatever that healing journey looks like.

Share
or  Copy Link
Link copied to clipboard.
Be first
214 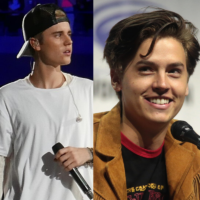