This Calendar Showcases Disability and Body Positivity 365 Days a Year

In February of this year, I launched empowerment photoshoots to help people overcome the negativity they experience in life. Each person would write words on themselves to represent what they thought, things other people have said or things that linked to their illness/disability.

This helped them release those feelings and believe in themselves with the support of everyone around them. It took a lot of courage for them to get in front of the camera but they walked away knowing they are worthy, enough and not alone.

I planned to turn it into an awareness calendar for invisible illnesses and disabilities based on the amazing feedback I received. Everyone told me they felt accepted for who they are and I feel this is important for the “hidden” community because we receive a lot of discrimination on a day to day basis, just because our fight can’t be seen.

I live with a number of hidden illnesses myself and understand how challenging it can be both mentally and physically. I had a personal photoshoot back in 2018 showcasing words that linked to my illness as a way to help others see them, but in the process, it helped me see that I was worthy. My own personal shoot had helped others by sharing it on social media.

Our community is rarely represented when it comes to inclusivity, but we are very real.

I had a lot of hate for myself when my body changed because of my illness. I had a stoma bag between July 2017 and July 2018, and at first, I felt abnormal, but then I started to realize how many people actually lived with one.

Unfortunately, COVID canceled all my group photoshoots, but I wasn’t going to let that stop me from putting a calendar together. Instead, each person took photos at home and some even organized a photographer themselves. Ant Bradshaw at Style and Story International Pageant Photography then edited them for me.

I managed to get a photoshoot day in Kent organized by CJB Pageantry in October (before the pandemic) and those photos were edited into a group shot.

Many of those who took part in the calendar were those who had to shield, so this helped their mental health after a challenging few months.

The calendar was launched in November with over 130 copies already sold. All net profits are being donated to 10 different charities and I’m hoping to raise £500 in total. Over 70 people took part and I have received so many messages thanking me for their gained self-acceptance.

The calendars can be purchased via my own awareness website, Making the Invisible Visible, along with other items I’ve created to help educate others whilst giving back to charity.

There is a lack of understanding of invisible illnesses and disabilities that needs to change. On numerous occasions I’ve been told I don’t look sick, I’m lazy or I’m faking it and this is far from the truth. I’m hoping that educating others on invisible illnesses and disabilities through my calendar will help people see the hidden struggles we have and stop their discrimination.

One in five people in the U.K. has a disability and 80% of those are invisible. This means it’s likely you know someone living with a disability, so it’s important they are supported and understood.

Inclusivity in the fashion industry is something I’ve also tried to work on with my own photoshoots. I was excited to receive a collaboration with Ann Summers who gifted myself and three other ladies underwear for the calendar. I believe people would find self-love easier if the media highlighted “real” bodies. 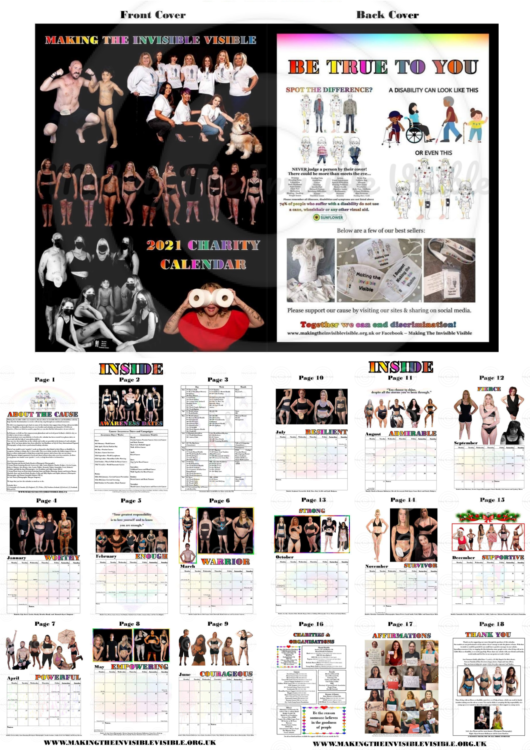