When You're Diagnosed With Bipolar Disorder at 47 Years Old

It was a shock, but not a surprise, just as much as it was a relief yet also frightening.

For 35 years I have been aware of something not quite right lurking within me. It’s taken all that time to discover the uneasy feeling was being caused by bipolar disorder.

I don’t have bipolar with extreme highs or rapid cycling. My episodes can go on for weeks or months and I am always waiting for the next state or an episode to come. My states are very deep depression, mild depression, stable, hypomanic and then there are nasty little episodes that develop beneath it all. Stable phases are obviously the best, but even when I’m in a stable phase I am waiting for a low, which kind of puts you in a permanent state of high alert. We thought I was just boom/bust; taking too much on then crashing because I’d overdone it. We didn’t realize there was a reason behind that pattern.

Over the last few years I feel as if I’ve held back my personality to conform to my depression diagnosis. I haven’t always shown my “up” side in recent years for fear of not being believed that I really had a mental illness, when I actually felt it was something more than I had already been diagnosed with. I do know though that if you asked a room full of people with diagnosed mental health conditions to put their hand up if they felt there was a misdiagnosis or more to come, they would pretty much all have a hand in the air!

Dark to light….acknowledge and accept.

Some of the signs.

So previously I’d been diagnosed with depression and then major depressive disorder. But I couldn’t tolerate normal SSRIs, none of the four different antidepressants the GP prescribed actually helped me; in fact they made me a lot worse. Even as a teenager I had a lot of “peaks and troughs,” but I suppose these were seen as teenage hormones. The episodes I have were never identified, but now I can look back and see that I had very definite periods of either a couple of days or weeks when I was really very unwell mentally. As a teen I didn’t drink through them, I “functioned” through them. As an adult I drank and mostly functioned. Then last year I gave up alcohol and the mists around these episodes began to clear.

Doing too much, drinking too much or going to extremes will sometimes trigger a mood episode, and in the past I haven’t always made the connection, but now I can look back at times when I overdid it or became too excited and enthusiastic resulting in months of depression to recover. It’s been helpful talking to friends who say they have always seen that in me. I thought I was following normal patterns and couldn’t understand why I couldn’t cope with them when other people could. It is that old double edged sword, when I look at what those hypermanic periods have helped me to achieve, all my creativity, energy and ideas that come from them.

Aside from the episodes of low mood and depression that many people experience, I also have episodes of suicidal feelings and wanting to self-harm, which are super scary. Especially when you are looking out and seeing the life in front of you is the one you’ve always wanted. They don’t make sense and make me feel very lonely. But in my head they are providing me with the evidence that I really am ill and not making it up, and that acting on them will take the feelings away from my head.

Changing between states can be a relief, moving from depression upwards is great, but also moving from stable to depression feels OK, because you knew it was going to come back and you’ve been waiting for your old friend. I’m particularly self-critical when I drop into a depression after a manic phase. I will regret absolutely anything and everything from what I’ve said, done or plans I’ve made and I may or may not communicate this!

So do I recognize myself as someone with bipolar? I’ve always felt that I’m a bit of an oxymoron; I know I’m a really positive person, strong, kind, enthusiastic, imaginative, creative, determined and also pretty laidback. But these things are at odds with the depression that makes me so negative about myself and batters me constantly with self-doubt and self-criticism. I know everyone sees a mixture of traits in themselves, but it’s hard when you really feel those traits and then they suddenly change.

It’s not known why individuals get bipolar; it could be genetic inheritance. In my case it could be due to losing our mother as we knew her to her stroke; I was 6 years old and very attached to her. This kind of trauma can have a big effect on your ability to regulate your emotions. It could also just be my brain chemistry.

I have very high personal insight, self awareness and empathy. This is a blessing and a curse! It has helped me to articulate about my mental health though and that has helped me to eventually get the right diagnoses and help.

There are ways to stabilize my moods that aren’t medication such as yoga, meditation, walking, being outdoors, running, swimming outdoors, eating well and listening to the right music. I also need good quality, regular sleep and a good routine. I get really antsy when we’re away and out of routine and I don’t have a plan for each day. 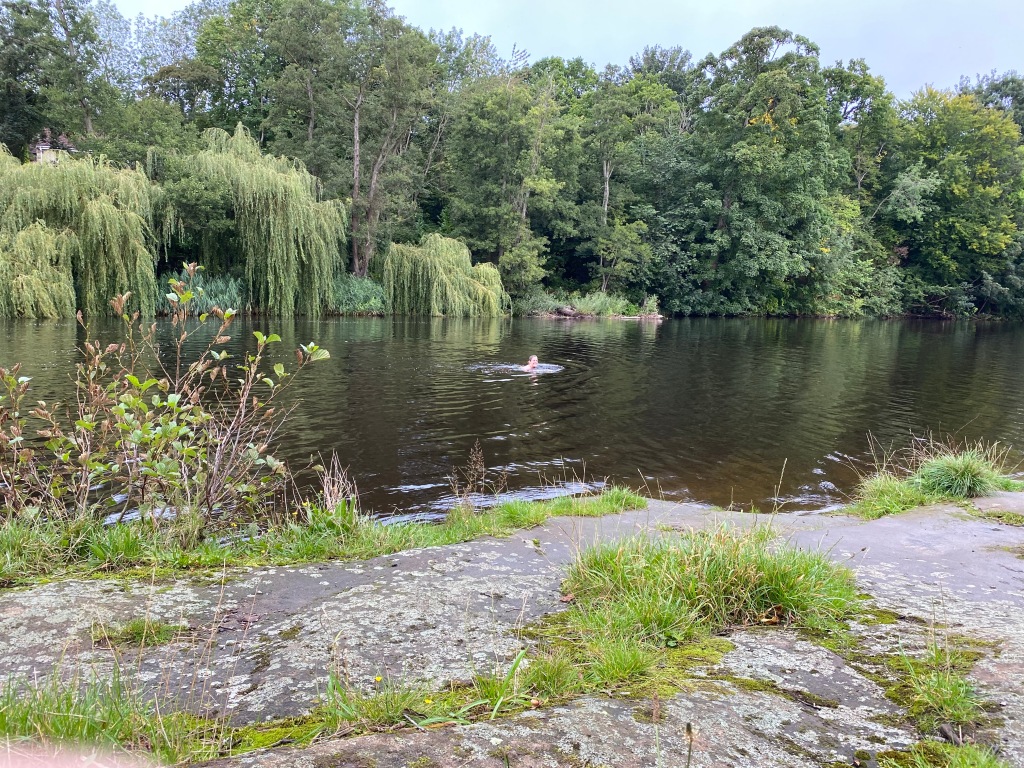 Swimming in the River Nidd in September

I will have to stay off alcohol and this has been a big learner. I gave up almost a year ago after a really bad year of mental health followed by some stability, and I knew that drinking affected me badly. I’m almost one year sober now, and it’s still hard because I would still like to drink. But now I know why it affected me so badly and I have to focus on the benefits that staying alcohol-free brings to me. As I start the new medication I won’t be able to drink anyway. This is something I need to work through and grieve for in a way. I have to look at all the benefits that staying alcohol-free brings to me, especially the clarity on a morning.

The medication will have two parts; an antidepressant which I am already on which also helps with cognitive function and then a mood stabilizer. I’m nervous about taking new meds, but know you have to persevere until they level out in your body or they find the right combination.

The support network I have is really important. I have my family, my friends, my work colleagues, my counsellor, GP, psychiatrist and my support groups. They are all essential because they all see different aspects of me. Other people have already helped me by pointing out when I’m in an extreme phase as sometimes I won’t see it, or even that I’m heading into one. Insight can easily disappear. Last year I created a mental health action plan for myself; it’s like my asthma action plan in format. Tt was one of the best things I ever did for myself.

I’m scared of not being believed by people who don’t understand bipolar disorder, or being accused of attention seeking. I know the most important thing is not that I have a name for what I’ve been going through, but I have a path to follow to get better. In the past I have suspected there to be a conspiracy between the “experts” to not diagnose me! Now that I have a diagnosis I have to trust the doctors who have a lot of experience.

I have regrets about some of my behaviors when I’ve been in previous hypomanic states during bad episodes, but I can’t go back and change them. At least I know why I have acted so out of character at times in my life and why I struggled so much to accept those periods.

I have to look to the future positively; I’m still me and I have all the parts that make me who I am. I have to accept that this is part of who I am, and I’ve been accepted as me by all my friends and family past and present. The medication might be tricky, but I have experts on my side to monitor it and I have support from every area of my life. I’ve spent years trying to support my mental health and the only bit that eluded me was the bit that I didn’t fully grasp. Now I have an explanation. I hope it will be easier to accept how I am and keep moving forwards. 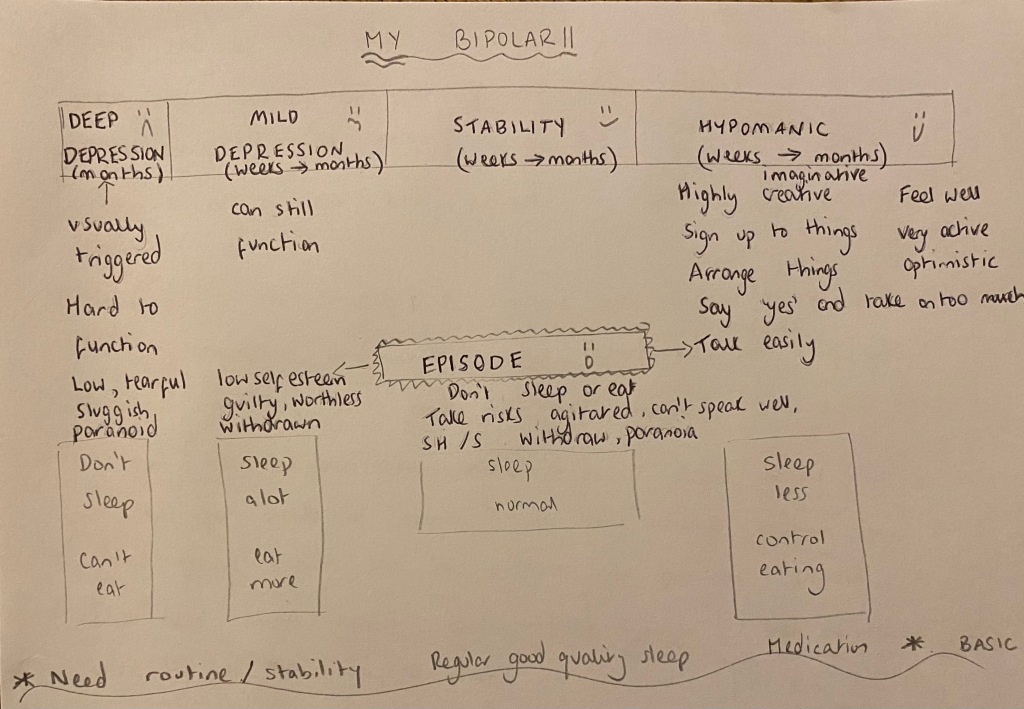 How I see my different states…

Share
or  Copy Link
Link copied to clipboard.
Be first
888