“When Hadley first started kindergarten I kept hearing about a good friend she had at school. I didn’t know anything about her, but when I saw her parents at curriculum night, I jumped at the opportunity to introduce myself! A year and a half later, not only has Hadley made a great friend, but Bryan and I also did! Little did we know… they were traveling the rare disease road as well. Even though Hadley and Shelby do not have the same rare disease, we have found many similarities in our stories about figuring out life for a child with a rare disease.” –Brie

“When I would drop Shelby off at school, I saw the cutest little relationship she had with one of her fellow classmates named Hadley. Each day at drop-off, the girls were so excited to see each other and I knew they were developing a very special bond. I was so thankful Brie made that initial contact at curriculum night because now we have developed our own special bond and friendship. When you are navigating the life of having a child with a rare disease, many people just can’t understand the challenges you face or what your life is like on a daily basis. Having someone that has gone through the same situations and understands those challenges has been incredible.” –Rebecca

In honor of Rare Disease Day at the end of this month, we wanted to team up and spread awareness about the rare diseases uniparental disomy 16 and DDX3X syndrome! Here is a little bit about Shelby and Hadley’s story, as told by their moms Rebecca and Brie. 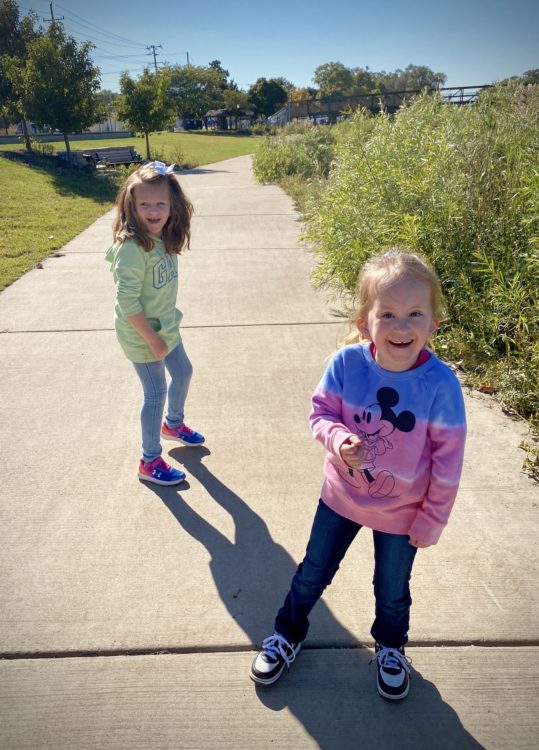 A little bit about the girls’ rare diseases

Shelby has UPD 16 (uniparental disomy 16) which falls under the diagnosis of mosaic trisomy 16.  Both of her 16th chromosomes came from me (mom) instead of one from each parent. Uniparental disomy (UPD) refers to a condition in which two homologous chromosomes or chromosomal regions are inherited from one parent.

Hadley has DDX3X syndrome, which is caused by a random genetic mutation that occurs at conception. There are currently right around 600 people identified with DDX3X syndrome worldwide, and no two are exactly the same! So far, Hadley is the only individual that has her exact genetic change which is common for many of the individuals with DDX3X. DDX3X syndrome can cause epilepsy, developmental delays, gross motor challenges, or autism among many other symptoms. When Hadley was diagnosed the only way to get the diagnosis was through Whole Exome Sequencing (WES). This is expensive and difficult to get covered by insurance. Recently, I heard that DDX3X syndrome has now been added to other panels that are easier to access, which is great news!

What it was like to receive a rare diagnosis

When we received Shelby’s initial diagnosis, no one on our care team was familiar with this disorder and we were referred to a geneticist. Unfortunately, even the geneticist hadn’t seen any cases personally and was only able to give us information from previously published articles that were severely out of date. It was a very stressful and terrifying time, not knowing how our daughter would develop in utero and what the long-term outcomes would be or her quality of life. It was so frustrating not having anywhere to turn for answers.

Similar to Shelby’s story, when Hadley’s geneticist called us with the diagnosis, she explained that this was the first time she had heard of this disease and shared some resources she found on the internet. Unlike Shelby’s story, we learned of Hadley’s diagnosis after over three years of searching for answers. So for us, there was also a sense of relief finding a diagnosis. However, I will never ever forget that geneticist telling me that there were under 250 people with DDX3X in the world, and feeling an enormous sense of sadness because it felt like we were going to be so alone in this journey.

How the rare diseases impact the girls

Shelby was born at 38 weeks weighing 4 lbs 9 oz.  She ended up having IUGR (intrauterine growth restriction), a multicystic dysplastic kidney, ASD (atrial septic defect) and a PDA (patent ductus arteriosus). At 2 months of age, Shelby had her first heart surgery to repair the PDA and spent 12 days in the hospital. She went home on a feeding tube and received many therapies. Shelby has remained small for her age which is a characteristic of UPD 16.

At age 1, she weighed 12 pounds and was just sitting up on her own. She didn’t walk till she was 2 ½. At age 4 she had her second heart surgery to repair her ASD, they were able to place a device in her heart to close the hole using a trans-catheter closure which is less invasive than open-heart surgery. Shelby still receives physical therapy, speech therapy and occupational therapy. She is still small for her age, weighing about 40 pounds at 6 years old. She is also developmentally behind her peers and is in a special education curriculum in school.

However, even with all that we have been through with Shelby, she is the most caring and loving little girl. She thrives in all social aspects of life. Everyone who meets Shelby falls in love with her big personality and kindness.

Hadley’s tiny genetic change on the DDX3X gene causes some pretty major challenges for her. She has epilepsy, developmental delays including speech, gross motor, and fine motor, hypotonia, attention challenges, and differences in brain structures. These symptoms impact every single aspect of her life, but she is pushed to the limit every single day and continuously growing in all sorts of ways.

Hadley has some really special qualities. She is the life of any party! Currently, her favorite song is “I Love Rock and Roll” and to watch her dance and sing to her favorite music is to see pure joy. Hadley loves people and socializing. This is definitely something Shelby and Hadley have in common!

What we would tell parents of newly diagnosed kids

One of the biggest things I would like parents to know is that you aren’t going to get a lot of information from your doctors or specialists regarding any current or updated information, including quality of life or long-term outcomes. Other families I have spoken with have had the same experience when meeting with a geneticist that simply tells them their child isn’t going to be compatible with life, severely disabled, long-term health problems, etc. But, what I really want parents to know is that most children with this diagnosis go on to live beautiful lives even with the challenges they may face.

I want parents to know that you are not alone. Finding out your child has a chronic, complex, rare disease can be a shock to just about any parent. But the most amazing thing I have found is that when you find your tribe, it’s not that you never have those moments of sadness, grief, or uncertainty. It’s that when you look to your right and look to your left you see other parents right next to you. You see some of the same grief and uncertainty, but you also see encouragement, courage, determination, and a whole new world that you never knew you needed.

Hadley and Shelby’s friendship is so special to see. There are no boxes that need to be checked, no conditions, no inhibition. They are unabashedly who they are, and their absolute love for the little things in life brings so much joy to anyone who knows them.

Our friendship as parents of children with rare diseases is equally special. We live in a rural area, and finding friends close by that understand what you’ve been through and the uncertainties of the future is priceless.

My very first blog post was just over a year ago and the post included this quote below. Not only are we imagining a world like this, but we are building this world. And it makes me so hopeful for our girls’ future.