Body-focused repetitive behavior (BFRB) disorders such as trichotillomania, dermatillomania, and onychophagia often are stigmatized. People who deal with them are often asked intrusive questions, are misunderstood and may feel shame around the disorder. Here are eight things you shouldn’t say to someone with BFRBs.

I often find this with people who try to prevent someone from picking or pulling as well. This never ends well and just adds more urgency to the compulsion to pick/pull. My mum used to try and prevent me from picking at my nails when I was a kid and it would make me so anxious. I didn’t know how to make her understand that I had to continue. Finding alternatives to keep hands busy can help. However, forcing someone to stop only makes the compulsion worse.

2. What’s wrong with your face, hair (insert whatever body part)

Sometimes I pick so badly I’ll bleed and I don’t even realize it. There’s nothing worse than when someone says loudly “omg, what’s wrong with you?” If you notice someone has been picking or if they are bleeding due to picking, kindly inform them in a polite way. If it’s a friend, maybe text them.

3. You’d be so pretty/handsome if you didn’t do that to yourself

I’m gorgeous no matter what. If you feel the need to say that then you have some things to work through yourself.

There are many people who end up wearing wigs due to their body-focused repetitive behavior. While there are therapies and things like stim toys to help from picking, it can be impossible to stop even if it causes bald spots and affects our appearance. 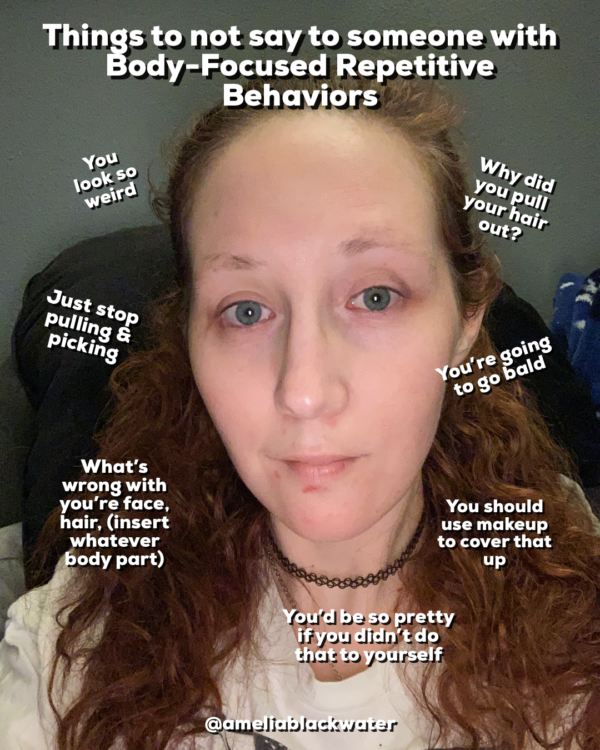 5. You should use makeup to cover that

Body-focused repetitive behavior’s are a disorder and no one should be shamed into covering it up. I once had a coworker make a comment about my eyebrows and how I should make sure I filled them in before my wedding, since they were so patchy and I barely looked like I had any eyebrows. I have picked so bad that I have large bald spots and I just don’t fill in my eyebrows. I felt so insecure I made sure that I had my eyebrows filled in for my makeup. Now that I look back on my photos I kinda regret filling my eyebrows in. My patchy eyebrows are me, and I’m not ashamed.

6. Why did you pull your hair out? Why do you pick?

Although these can be well-meaning in attempts to understand why someone picks or pulls, no one ever owes an explanation. Sometimes it’s not an easy thing to define. When I pick and pull I don’t always know I’m doing it, let alone why. I could’ve pulled half my eyebrow out before I realize what I had just done. It’s a compulsion and there isn’t always a reason.

7. You look so weird

Many people with BFRBs often feel self-conscious and insecure. When I’ve gone on a really bad picking and pulling spree I often feel ugly insecure. When other people make comments stating that I look weird with no eyebrows or eyelashes, I feel like they’ve just confirmed all the horrible thoughts I’ve been thinking, and it makes my body-focused repetitive behavior disorder worse.

8. You are going to create scars

Unfortunately, sometimes picking can create scars. Instead of commenting on scars try to be positive. Provide things for them to focus on instead of picking or pulling. Never shame them about their body-focused repetitive behavior; it can only make things worse.

Body-focused repetitive behavior disorders can be embarrassing and sometimes isolating. Being understanding can help someone who might be feeling insecure.

Enjoy my writing? Find my writing and advocacy on Instagram and poetry book on Amazon.