What the 'Before' Pictures Won't Tell You About My Eating Disorder

A few months ago, I contacted a national woman’s magazine to tell them about my journey with anorexia and how I am now recovered. I wanted to raise awareness that recovery is possible and asked for help in doing so. A journalist replied saying that she would love to suggest this to her editor, and was I able to send over some images that would illustrate the story. I clarified the type of photos required, and she said they would need some images during my illness as well as some recent ones.

I didn’t have any “before” photos because funnily enough, during that time I hated my body, and the thought of having my picture taken sent me into a cold sweat. I would avoid cameras like the plague, often offering to take the photo of group shots so I didn’t have to be in it.

Raising awareness was important to me, so I asked family and friends just in case someone had managed to catch a sneaky, informal photo of me I wasn’t aware of. My dad said he had taken a photo, but had deleted it because looking at it upset him. He said I didn’t look like the “real me” at all, and he didn’t want to see me like that.

I sometimes wish I had photos. Because my view of myself was so distorted, I can’t remember what I looked like, However, I do remember being particularly uncomfortable sitting in bathtubs. I also remember pulling at skin, convincing myself it was fat. I felt so huge even though I could fit into the clothes of small children. I’m not sure whether these photos would fill me with pride, seeing what I’ve achieved, or just make me feel sad about how I used to be. 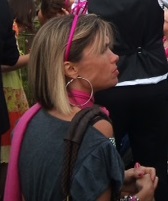 So the hunt for photos was not very fruitful. I obviously did a great job at avoiding those cameras. But I was given this photo. It only shows my face and if you look closely you can see that my cheeks have sunken. But apart from that I don’t look particularly skinny or unwell. I have a nice tan. To everyone else I may look OK.

But this is the problem, because people with anorexia may never look “unwell” to anyone else. They may be complimented on how good they look, which encourages them to continue their behaviors, even though they feel messed up inside. They may not feel skinny enough because of others’ comments or in the past they may have been shocked by pictures of skinny teenagers who have fallen into the hands of anorexia and tell themselves “that’s not me, so I don’t have a problem.”

The real issue was not my weight, or what I was eating, or what my behaviors were, which seem to be the focus for everyone who doesn’t understand eating disorders. The real issue was what was going on in my mind. I was living in torture. I was consumed by hateful thoughts about myself. I thought about nothing but food every minute of every day. I isolated myself so I felt more safe. I was a 35-year-old woman, a mother of two and I was comparing my body to 13-year-old girls, beating myself up if I thought they were skinnier than me, which in my mind they always were. But worst of all, I felt there was no end to this torture, there was no way out for me. I had convinced myself that my two daughters were better off without me. I was destroying them and their future would be better without me in it. I thought about suicide probably every half hour of every day. One day after I couldn’t restrict any more, I binged and I couldn’t throw it up. So I considered killing myself then. I didn’t think any further than the fact that it would cure my problem of eating.

But you can’t see any of this in this photo, can you? You are likely to see a woman dressed up at a wedding. You don’t see that I couldn’t talk to anyone because I had no real thoughts in my mind, I could only think about food and how much I hated myself. You don’t see that I left straight after this photo was taken because the food was about to be served. I went home and then returned after I got a phone call to say that the “eating” had finished. There was music at this wedding, and I love music, I love to dance, but my mood was so low I couldn’t even tap my foot along to the beat.

Having anorexia isn’t about eating, weight, food, even though our thoughts are very much focused on these things. It is our thoughts. It is our mindset. There is no “typical” person with anorexia, but I would suggest that if you answer yes to the following questions, there may be an issue:

If you are struggling with anorexia, ensure you find help to deal with the root cause, the reason why it started. This is typically an event from your past where you didn’t feel safe or in control. In the beginning, the eating disorder made you feel better; it was your best friend. But gradually things changed and the goal weights you’d strived for weren’t good enough, so you continued losing more weigh. The calories you were eating needed to be less, the time you spent in the gym had to be more. It’s become a goal you will never get to, and happiness will never be reached.

I eventually managed to get out. You can too. It wasn’t easy, but I feel so relieved to have reached the other side! I was in fear of it for so long, but now I’m here it’s pretty amazing. I now feel confident, positive and I’m happy. I don’t need anorexia to “help me” any more. I don’t have to worry about other people’s comments or them thinking I’m OK when I’m not. That’s not true recovery. Recovery is not about restoring weight, it’s about changing how you feel about yourself.

Wishing you the very best.

Kim Marshall, founded Kiss Goodbye To Ana, following her own recovery from anorexia and bulimia and now helps women with eating disorders and particularly anorexia, out of the torturous place they’re in, whilst helping them feel safe and in control, every step of the way. She discovered EFT (Emotional Freedom Techniques – a therapy which involves tapping on acupressure points on the body, similar to acupuncture but without the needles, which help us release negative emotions so we feel more calm and relaxed) which turned her life around and helped her become confident, positive, and relaxed about food and her body. She became an EFT Practitioner and now helps her clients achieve the same, focusing on changing their mindset rather than on meal plans and goal weights. She also became a Matrix Reimprinting Practitioner (an advanced form of EFT which helps replace negative memories with positive experiences). She is a member of both professional organisations, AAMET (Association for the Advancement of Meridian Energy Techniques) and EFTMRA (Emotional Freedom Technique and Matrix Reimprinting Academy). Kim is currently writing her first book, “How To Kiss Goodbye To Ana” and is a Thrive Global and Recovery Warrior blogger. She has had blogs published by Beat (Eating Disorders Charity) and has been interviewed on local radio and in local press.