What It Means to Have a 'Self-Esteem Attack'

There are many different types and causes of anxiety attacks. Some of the different forms include obsessive compulsive disorder (OCD), social disorder, agoraphobia and post-traumatic stress disorder (PTSD). For me, the anxiety attack I am most familiar with is a “self-esteem attack.”

Offer support and get advice in our community.
Join the conversation: 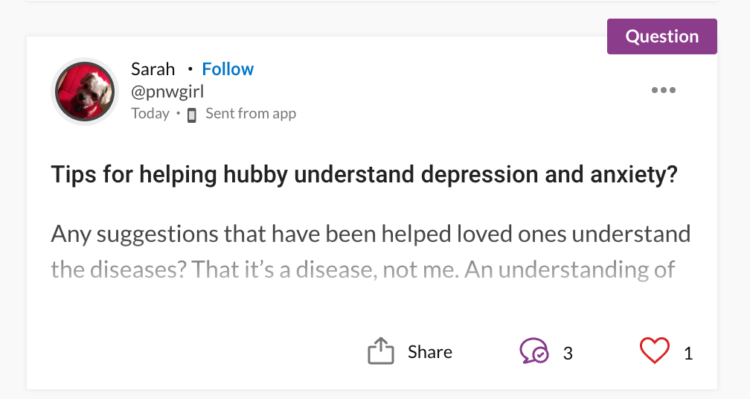 For “normal” people, if they make some kind of mistake or get criticized by someone, they can think, “OK, I screwed up,” and then move on with their day. For me and for others who face self-esteem attacks, they don’t think this way. Instead of thinking, “I made a mistake,” they think, “I am a mistake.” When someone doesn’t like them, instead of thinking, “Well, that’s their loss,” they think, “There must be something wrong with me.”

For a few moments, a few hours or maybe even a few days, you’re filled with an all-consuming and illogical self-hate. You internalize a circumstance, thinking it’s telling of the kind of person you are when, in fact, it does not.

For instance, a couple weeks ago, I missed a meeting at work. I was selected to be on a jury in a trial, and I was so nervous I completely forgot to check my work calendar. As a result, I received an email to me and my boss from a pretty pissed off coworker, and I started to panic.

“I’m going to get fired. How did I even get this job? I am such an idiot. I’m so unprofessional. Everyone’s going to hate me. No one will ever respect me again.”

Guess what? It turned out to be nothing.

I called my boss, who told me, “You had jury duty, You had a lot on your mind, and you’ve never missed a meeting before. How many times have people stood you up? Seriously, don’t worry about it.”

I emailed the people who I missed the meeting with, profusely apologizing.

“Thank you for your email. It’s OK. It was only a half an hour,” they responded.

With my brain, I had completely blown things out of proportion. My palms started to sweat, my face was hot and I felt like I was going to be sick. I jumped immediately to the unrealistic conclusion that I would be fired, homeless and no one would want to hire me again. All  because of a simple, easy to correct mistake.

The Self-Esteem Institute describes a self-esteem attack as occurring “whenever a person with low self-esteem does or says something that he afterward deems to have been inappropriate, rude, obnoxious, off target or inaccurate. At that time, the person may experience immediate remorse, excruciating anxiety, his heart racing, his face turning red, a sinking feeling of embarrassment, depression and/or devastation.”

For me, when I’m having a self-esteem attack, for that moment, I can’t see anything outside of how bad I feel about myself. Even though in the back of my mind, I know the things my brain is telling me aren’t true, I can’t seem to stop. When I try to tell myself, “Stop it! You’re overreacting!” I only feel worse.

So, what should you do if you’re having a self-esteem attack?

Well, first of all, as I always say, know you’re not alone. Know you don’t have to feel this way alone. Don’t be ashamed and don’t apologize to anyone for your self-esteem attack. Instead, find a friend, a family member or a therapist to call when you feel like this, to be there for you until it passes.

Make sure it’s someone you trust. If anyone ever makes you feel like you’re a burden, know they are wrong. I have learned, for every person who judges you for the way you feel, there are even more who understand, who feel the same way and who want to support you.

Monica's goal is to raise awareness about suicide and help erase the stigma associated with mental illness. In 2012, she won first place in News Enterprise Reporting by the Michigan Press Association for her series on suicide in the community, and in 2013, was named “Digital Innovator of the Year” by the Local Media Association. She started the blog Meant to Live to help others by sharing signs of depression, reasons to live, resources, suicide and bullying prevention groups, other people’s stories and memorials. She especially wants to show people that they are not alone.

Save
Conversations 127
We use cookies and related technologies to help identify you and your devices, enhance your experience and conduct advertising and analysis. By choosing "Accept", or by using this site, you are agreeing to our use of cookies. You can read more about how The Mighty uses cookies in our Cookie Notice.
Manage Choices
Accept