In many ways, 2009 was a good year for me. I was in the second year of a full-time job I enjoyed after spending most of the previous decade completely debilitated by bipolar disorder.

But in this new job, I hadn’t missed a single day of work. The year 2009 also brought challenges. I had bouts of severe abdominal pain and was diagnosed with gallstones. The diagnostic tests also found a large mass in my liver. More tests and scans followed. By the fall, a specialist at a university hospital said the mass was almost certainly benign and I would just require intermittent tests to monitor my liver function. The medical appointments associated with those diagnoses were on top of my regular appointments to manage my mental illness. I saw my doctor a lot in 2009.

At a follow-up appointment in November, my doctor asked about my persistent cough. I told her that it had started that morning, and I otherwise felt fine. She told me in no uncertain terms that if I developed any further symptoms in the following 24 hours to come back to the clinic at that office, and ask for Tamiflu, as I would be in the window of time during which it would be effective against that year’s pandemic flu — H1N1 or the swine flu. Sure enough, the next morning I woke up feeling like I had been hit by a truck. I dragged myself to the clinic to see the on-call-doctor. As I sat down, she opened my file. “Wow. You’re here a lot,” she said flatly. I tried to explain the gallstones and liver thing, and convince her I wasn’t a hypochondriac. (You would think the fever would have convinced her of that, but I digress.)  She cut me off and said that my symptoms didn’t present in the correct order (cough before fever), so I didn’t have H1N1. She then said, “You take a lot of medications that are sedating. Take a bunch of those and sleep until you feel better.” I thanked her and left her office. Face mask off this time, since I didn’t have the virus responsible for the pandemic.

I went home and had a nap. (And continued to take my medication only as prescribed, despite the “advice” I received earlier in the day.) Then I got up and went to work. I am a tutor and work one-on-one with high school students. I sit directly across a desk from them. Many questioned my cough, and more than a few were grossed out and concerned about their own health, but I assured them that a doctor told me it wasn’t H1N1, so they were safe. For over two weeks I continued to work while my health declined. When it became difficult to breathe, I made an appointment to see my doctor.

At first, my doctor was upset that I had let myself get that sick before seeking treatment. But when she saw the notes from her colleague, the doctor I saw at the clinic, her face got red.  She listened to my chest and told me that I had pneumonia. She checked my ears and they were both infected — the left one so badlyI couldn’t hear out of it. She apologized on behalf of her colleague and said that it was very likely that I did have H1N1, because pneumonia is a common complication of that flu.

I was sick for close to four months. There were nights that I was afraid to fall asleep because I thought I would stop breathing. But I was so tired that I couldn’t stay awake. I ran a humidifier in my bedroom, but it didn’t produce enough humidity. So, I bought an electric kettle and would boil water in my bedroom until the walls started to feel damp. I went through two courses of antibiotics and used puffers for four months. The physical toll it took on me was significant. The emotional toll was worse. 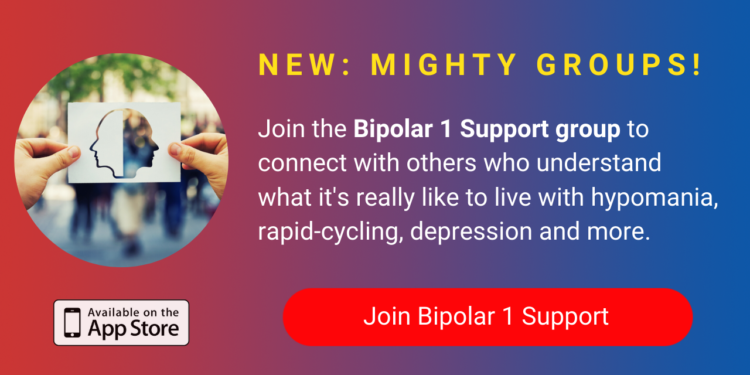 Bipolar disorder is complex to treat. Since my diagnosis over 20 years ago, I haven’t gone longer than three months without seeing a doctor. There were times when I would have multiple doctors’ appointments in one week. My medications are expensive, but I qualify for a provincial health plan that pays for most of them. Which is all to say, I use the health care system a lot. I know that. It wasn’t something I chose, but that is the reality. My appointment with the clinic doctor in 2009 only confirmed that belief in me. I was there “a lot.” And I felt like I wasted her time when she said I didn’t have the flu. It was that feeling that lead me to wait two weeks, and get significantly sicker, before I went to see my doctor.

There is a name for this — it’s called stigma. It wasn’t H1N1 that caused me to develop pneumonia, it was stigma. Stigma on the part of the doctor who barely looked at me, much less completed a physical exam, once she saw my chart. It was her stigma that dismissed the very powerful medications I take and lead her to suggest that I “take a bunch” of them. But it’s also a self-stigma that I have learned over the course of my illness. It makes me question if I “really” need to seek medical attention for the pain or discomfort I am feeling.

Mental illness is a risk factor for infectious disease. Not in the way that heart disease or respiratory disorders are, because mental illness doesn’t impact the body’s ability to fight off infection. (Although medication and concurrent disorders may.) Mental illness is a risk factor for infectious disease because people with mental illness are dismissed and not believed because of stigma. This can lead to people being in advanced stages of illness before getting treatment. And when a medical professional brushes them off, this puts the general population at risk, just as I did. I went to work, went grocery shopping and got coffee for two weeks with H1N1. I didn’t take any precautions to minimize the spread of illness because I was told I didn’t have an illness that required anything more than sleeping until I felt better.

Sadly, my story isn’t unique. In fact, researchers have found that stigma towards patients with mental illness: “undermines access to diagnosis, treatment, and successful health outcomes.” In the time of COVID-19, the worst pandemic in the last century, we need to address any and all barriers that would prevent anyone from getting the testing, treatment and follow-up care they need. It doesn’t require a single cent to ask healthcare providers to set aside preconceived notions they may have about a patient’s psychiatric diagnosis and treat the patient with the same care and attention as any other person seeking help for an illness. It was clear in that clinic in 2009 that I was seen as a bipolar patient, who happened to have a cough and fever, and not a patient presenting with cough and fever, attending the clinic on the recommendation of her doctor, who also happens to have a diagnosis of bipolar disorder. I can’t know for sure if it would have made a difference for me. I hope for people seeking care today for symptoms that fit the criteria for COVID-19, and also happen to have a psychiatric diagnosis, that it makes a difference for them.

I am an educator, an advocate, an ally and a student. I also happen to have Bipolar Disorder. I hope to use my experiences and battles to make the journey for others with this disease easier.

tutor_chris
Want more of The Mighty?
You can find even more stories on our Home page. There, you’ll also find thoughts and questions by our community.
Take Me Home