11 Things People Don't Realize You're Doing Because You're Hypomanic

Hypomania in bipolar disorder can be difficult to recognize sometimes. It’s commonly viewed as “less intense” than its sibling, mania, because it typically doesn’t last as long and doesn’t include psychosis, according to VeryWellMind. A psychology professor of mine even once described it as almost “pleasurable,” and as “mania without the negatives.”

Now, obviously, this isn’t true. Hypomania can still be debilitating for those who experience it, but it can often fly under the radar. Because of this, it may be hard to recognize when you, or someone in your life is experiencing a hypomanic episode.

Because hypomania can hurt just like a manic episode can, it’s important to know what hypomania can “look” like. So, we asked our bipolar disorder community to describe to us things they do when they’re hypomanic. Read what they said below.

What’s something people don’t realize you do because of hypomania? Join the conversation below. 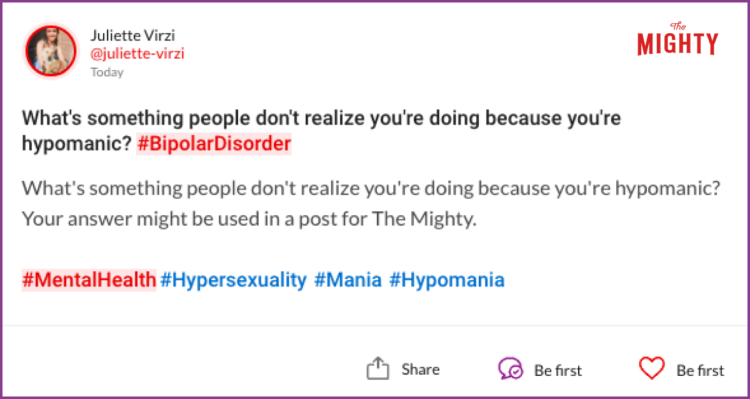 Here’s what our bipolar disorder community shared with us:

1. Having bursts of productivity.

“Suddenly being incredibly productive. My family and friends often mistake it as [being] a big step in recovering from a depressive episode [and being] able to cope with everyday tasks and all the things I’ve wanted to get done but was too depressed to complete. It’s actually the start of me spiraling into a manic episode.” — Courtney F.

“Meticulously cleaning/organizing my house. Floorboards, walls, cupboards, everything.” — Elizabeth B.

3. Having lots of ideas, but struggling to follow through on them.

“Starting a million projects and paintings, crashing, and (at least before I was diagnosed) wondering why I couldn’t finish anything.” — Lisa P.

“Going shopping for all the supplies I need for organizing the garage, redoing the pantry, painting the downstairs, starting my latest business idea — and then adding them to the pile of abandoned projects.” — Keira M.

4. Talking too fast to even keep up with yourself.

“It can seem like I’m monopolizing a conversation. I begin to talk so fast, and with my mind jumping from topic to topic, it can be difficult for others to get a word in. It’s not that I don’t care what others have to say, but my mind can’t fixate on any one subject for very long.” — Stephanie G.H.

“Talking fast, so fast that others can barely understand me. It’s not until someone tells me that I realize and then I fall into deep shame and want to burst into tears because it means I am becoming elevated again and have reached hypomania, the first step to becoming manic again, which is my biggest fear.” — Sammy E.

5. Spending far too much money.

“Food shopping about three or four times a week, I’ll spend hundreds and have nothing to see for my money, it’s all on drinks and expensive recipes or the posh meal deals. Everything is an impulse buy.” — Emily W.

“I spend my money and then try to figure out where it all went. I speed and don’t even realize how fast I’m going. I’m actually pretty fun to be around, but doesn’t last long before I crash.” — Mary M.

“I put myself into inappropriate situations. Which is extremely bad for me as I was sexually abused. So when I come out if the manic state I have a lot of self-hate and shame.” — Brooke S.

“Mood swings. I can go from happy and hyper to a screaming rage about the smallest thing. Also, racing thoughts and speaking even faster than the thoughts. When I’m talking to someone and they don’t understand what I’m saying, or they ask me to slow down/take a breath, then it really hits home.” — Ashley B.

“Irritable — the tiniest thing can set me off on a rampage or bawling my eyes out; start projects that don’t get finished; suddenly taking up a hobby that I’ve never done before; shopping!” — Sam D.

“Irritability for sure. However, as a hardcore introvert, agreeing to all the activities and packing my schedule is also a telltale sign.” — Mallory T.

9. Feeling on top of the world.

“I literally feel like I’m invincible and nothing or nobody can hurt me. I’m much more confident and sometimes it can get me in trouble.” — Tyler W.

“I can’t sit still. I’ll fidget, bounce my legs, tap my fingers, or even walk and pace around. That, talking fast and being uncharacteristically motivated to do projects, such as deciding to paint an entire room at 10:30pm (why not? I already had the paint).” — Spencer B.

“I became obsessed with how much my spring onions were growing in a matter of hours. I would take my tape measure and every two hours measured and graphed the results. Plants are my go-to when hypomania hits. P.S. — spring onions grow really quickly.” — Sue C.

Hypomania, as I said above, can be difficult to recognize. However, acknowledging the episode is the first step to grounding yourself or a loved one throughout it. If you can relate, you’re not alone. Here are some stories you might connect with:

Do you experience any of these things, or have one of your own to add? Let us know in the comments.

A Self-care Program Just for You

Achieve your goals for this year with help from The Mighty community. Join 52 Small Things, The Mighty’s weekly self-care challenge.

Save
Conversations 31
We use cookies and related technologies to help identify you and your devices, enhance your experience and conduct advertising and analysis. By choosing "Accept", or by using this site, you are agreeing to our use of cookies. You can read more about how The Mighty uses cookies in our Cookie Notice.
Manage Choices
Accept