I was diagnosed with borderline personality disorder (BPD) about 35 years ago, back when the diagnosis was fairly new and not well understood at all. I struggled with my dramatic mood swings and my explosive anger for more years than I care to even think about. In the late 1980s, a psychologist named Dr. Marsha Linehan began her seminal work on a treatment protocol called dialectical behavioral therapy (DBT). The treatment is now recognized as the gold-standard treatment protocol for people who have BPD because it teaches us how to regulate our emotions. The core fundamental practice of DBT is something called mindfulness.

For me, the most important part of DBT was learning how to manage my interpersonal relationships, something most of us have great difficulty with. I first encountered DBT when I was an inpatient at a famous psychiatric hospital in 1989. There, my psychiatrist was using the early DBT principles in his therapy with me. Fast-forward to 2001, when I was reintroduced to it again during an inpatient stay in my hometown of Toronto. Learning DBT skills is what has enabled me to put my BPD squarely into remission. I have been in remission for years now because of it.

My use of DBT in interpersonal relationships today.

When I was growing up in my father’s house, his word was law. There was no room for negotiation or even discussion when he told me to do something. Refusal on my part was often dealt with by his hand across my face. So, it is no wonder I grew up with very few interpersonal skills and no negotiation skills whatsoever. This is not at all surprising when you consider the environment in which I grew up and the behavior modeled for me by my father.

I never learned how to deal with conflict in my relationships. I could not talk about problems or the distress I felt because of them, nor could I find a way to compromise in order to “get what I wanted” from the other person. So, whenever things would get tough between me and a friend, I would abandon the relationship — usually in a fit of anger. Because of this, I became isolated and friendless over time. I woke up one day and realized I lived in a solitary world because I had, in essence, chased everyone away and out of my life completely. My husband had died and left me, and I had no friends at all.

Learning assertiveness training was a good start but not enough.

Somewhere along the line, I learned assertiveness training, which helped me a tremendous amount, but I still had a lot to learn about how to negotiate with people and really ask for what I wanted in a way that would help me achieve my desired goal. Part of the difficulty around this was my extreme reluctance to ask anyone for anything because of my fear of rejection. So, while assertiveness was helpful, it did not solve the basic problem.

Mr. Dave nearly did me in completely.

About four years ago, I began a relationship with a man whom I will call Dave. He is a “car collector” of sorts and owned a cute little Nissan Figaro. The first time I saw it, I fell in love with it. I decided I had to have one as well, partly because I thought it would be a nice hobby the two of us could do together which would help bring us closer together. The other reason was that I could afford to indulge myself for the pure hedonistic pleasure of owning one of those lovely little cars. So, I set about importing one with a local Japanese domestic market broker. It arrived about three months later and I was ecstatic. I bought my vanity plates, we put them on the car and then we got down to the task of cleaning it up — because it was dirty! About a year later, I decided to buy the cutest little 1967 Datsun Fairlady 1600. Datsun was originally owned by Nissan and because Dave loves the Nissan brand, he encouraged me to buy it. We registered both cars in his name for the purposes of insurance. If you own a classic car in Ontario, you must also have a regular “everyday” car or you can’t get insurance. I didn’t, so that was another reason to register both cars to his name. 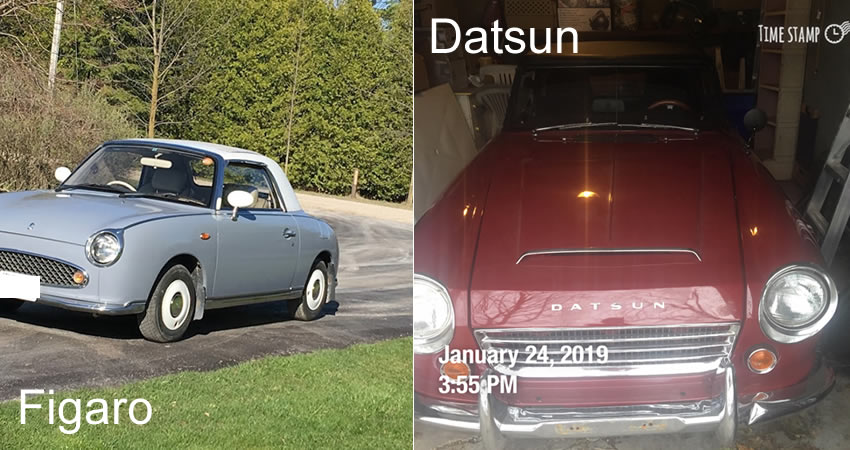 A few years passed and in 2018, we took a trip to Hawaii. While we were there, we broke up. He assaulted me, so I left. I came home the next day, heartbroken and distraught and despairing. The little Datsun was still living in my garage, where it had been deposited once it had arrived (after being imported from Atlanta). I quickly set about trying to “repair” the relationship with Dave, even though I had not done anything wrong. After all, he was the one who assaulted me. I continued to email him every day, like I had done for the previous four years. We had fallen into a pattern whereby I would email him every morning to check in and tell him my plans for the day. He would respond when he got home from work. It was a comfortable arrangement for a long-distance relationship. He was understandably distant. I kept pressing and basically begging him to love me again. Eventually, I threw in the towel and asked him if he thought we could still “be friends” and, much to my surprise, he said yes. So, we continued to be penpals.

A gradual realization that I had to really terminate the relationship.

Over time, I came to the conclusion that, no, I couldn’t be friends with him and that his car was taking up way too much space in my head. In the language of DBT, facilitators talk about people having a “box” in which they live and function. Conflicts arise when other people “come into our box,” “take things from us” and leave. These things are purely symbolic, as are the “boxes.” Think of it in the same way you might say to someone, “You are in my space.” So, this car began to feel like it was encroaching too much on my box, and I decided I had to find a way to get it out of my box. I began to recognize that having the car in my garage was detrimental to me because it was triggering my BPD. So, I composed the following “DEAR MAN” message to him.

Marsha Linehan loves acronyms, I guess, because they are easy for people to remember and thus apply. DEAR MAN stands for:

I wrote this to him:

Our relationship has been over for four months now. I want to ask you something about your car which is currently being stored in my garage. I have a need for and desire to have full closure with our relationship. This is important for my mental health and I hope you will respect my wishes. I know I told you that you could store the car in my garage until the spring but I have changed my mind about it because it is taking up too much space in my mind and has become detrimental to my mental health to have it here. If you agree to this request, you won’t ever have to have another communication with me because I will be able to finally and fully disengage from you. This is very difficult for me to do but it is a necessary step for me in terms of me being able to move forward. I am mindful that you are not going to want to spend the money to do this but it is very important to me that you do it. I don’t want to come across as mean and/or spiteful. This is just the last vestige of business between us which I would like to be concluded. I believe this is a valid request to make of you and by doing this, I am self-validating my need for closure with you. I am asking you to make arrangements with a towing company to have your car picked up and towed out to your house no later than next Monday, January 28th because keeping it here is causing me emotional distress. Even though I do not use my garage, having the car here is taking up too much room in my mind.

And then, I gave him the name of a towing company he could use for what I thought was a reasonable price.

Much to my surprise, he responded with this:

I understand. I will arrange my own towing. My target is to move the car around 11 a.m. Saturday. Let me know if that’s acceptable ASAP so I can book the time slot with the tow operator. And, so everything is really closed, I am also offering to reimburse you for the $435.31 Canadian Tire bill too. I know it was a lot of worry for you and you did save me some work in getting the car running again. Let me know and I’ll send it to you.

He did, in fact, send me the money and arranged to have the car removed. But the very fact he agreed to my request at all was the greatest achievement for me because I was able to meet my objective — to get him to agree to take the car away without being hostile or overtly angry with him and threatening him with an ultimatum. I view this as a major victory because initially, I was planning to use my father’s method of request which was to deliver an ultimatum: “Get the car out of my garage by such and such a date or I will have it towed out to the street and, because it isn’t plated, the police will pick it up and impound it. You’ve been warned.”

It was a huge win for me, a huge victory. I was able to ask him in such a way that allowed me to get what I wanted while still maintaining my dignity without stomping all over him. A victory indeed. The car is now gone and I retained my self-respect. Yes, Virginia, DBT really does work.

How have you been able to use a therapy technique in a real situation? Click here to find out how to share your experience.

Photo by Gabrielle Henderson on Unsplash