Making It to Our Third Christmas With Charlie

“Hello, baby,” I said, tears streaming down my face as I readjusted his tiny body. The OBGYN had just caught our newborn boy and placed him on my chest. I soaked in his face and his touch as Scott, my husband, clipped the umbilical cord. The nurse briefly took the baby from me to weigh and measure him, giving him an Apgar Score of seven — he was healthy.

Sooner than I expected, Scott and I were left alone in our room with our little newborn.

Scott pulled out his video camera, capturing my pure happiness as I gazed at our new son. I noticed the camera, looked at Scott, and smiled.

Our baby wore two little white gloves to prevent him from scratching his face. On his pink head was a striped newborn beanie provided by the hospital. As Scott zoomed the video camera closer, our baby’s tiny mouth formed a perfect O as it rubbed against his gloves in search of his thumb.

Charlie’s only birth complication was high levels of jaundice. The doctors made him wear a mask to protect his eyes and intermittently laid him in the neon blue jaundice pod to decrease his bilirubin levels. Once the levels lowered to a safe amount, we were discharged to go home. I placed Charlie in the carseat and it practically swallowed his tiny body. He was born 7 lbs and 4 oz but had lost a few ounces, as was typical for the first few days after birth before a mother’s milk comes in.

They wheelchaired me out of the hospital even though I could’ve walked, and Scott pulled the car up to the hospital entrance, clicking the car seat in place while I transitioned from the wheelchair into the passenger seat.

We were greeted with blue balloons and a banner that said “It’s a Boy” hanging between the French doors that opened up into our dining room. Blue and white plastic binkies had been added to the Christmas Tree that decorated the living room. It was mid-December.

Late on Christmas Eve, I woke up to Charlie’s cries and took him to the living room to feed him by the light of the Christmas lights on the tree. The room shimmered around us as I watched Charlie’s little mouth, starting as a small O and turning into a grin. He looked up at my face, full of love.

We had invited a few friends over for a Christmas Eve program earlier that evening. We didn’t live near family but we wanted to make the holiday special. We filled our bellies with ham, rolls, pomegranate salad, mashed potatoes and topped the meal off with pie.

“I watched Shelby give birth to Charlie and was surprised at how messy it was,” he said. “I started thinking about Jesus born in the manager and how it was probably messy, too, different than I used to imagine it.”

His voice broke as he continued, “Charlie is the best gift we’ve ever been given.”

I looked down at little Charlie, wiggling around in my arms, my heart full of tenderness.

He started rooting and fussing so I went into the backroom during the program’s reading of “A Cajun Night Before Christmas” by James Rice, a Louisiana Christmas tradition.

“T’was the Night Before Christmas
An’ all t’ru de house
Dey don’t a t’ing pass
Not even a mouse.
De churren been nozzle
Good snug on de flo’
An’ Mama pass de pepper
T’ru do crack on de do’.”

I heard the voices of our friends through the walls, closing my eyes with a soft smile as I listened, rocking back and forth in the rocking chair, Charlie suckling in my arms.

A healthy human being has an unconscious amount of tension in their muscles, even when relaxed or asleep. My newborn had this normal muscle tone, too, for exactly 54 days.

Only weeks after Christmas, Charlie’s legs stopped moving. A large tumor compressed his spinal cord causing partial paralysis and he was diagnosed with a rare form of infantile cancer — primitive myxoid mesenchymal tumor of infancy.

That first Christmas with him — the one we were ignorant of his illness — will always feel like “the honeymoon.” The calm before the storm. Tranquility before chaos. Euphoria before depression.

When December finally came around that year, Charlie, my husband and I had long since depleted any energy or vitality we began his cancer treatments with.

Charlie’s last dose of chemotherapy was on December 9, 2019. That last dose was Charlie’s last day of cancer treatments, and signified the beginning of his remission. It took a few weeks for his blood counts to rise enough that he felt well and acted like himself. 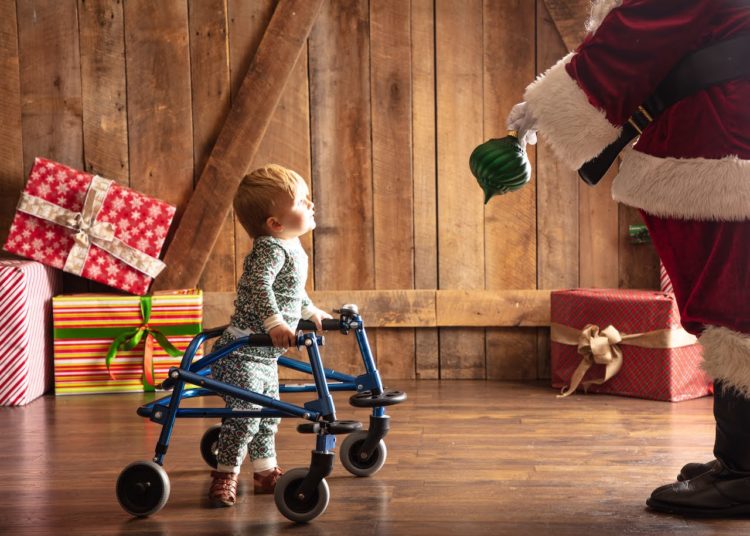 We are approaching Charlie’s third Christmas.

Charlie’s thick beautiful blonde hair has grown in, necessitating multiple haircuts this past year. His paralysis has improved. Though his lower body will always have low muscle tone and loss of sensation and strength, he can now use a posterior walker. He can lift his legs off the floor and swing himself in his walker with his arms. He can run around the house, bumping his walker into the sides of tables and couches like he has his own personal bumper car arena.

Charlie is chatty. He knows his letters and can count to 10. He loves to sing Christmas carols with us. He is a happy child.

This year, I can’t help but think that this picture of Charlie in his walker and our family’s personal sentiment towards Christmastime echoes the hope and encouragement that comes into focus and sparkles during the Christmas season.

We hope Charlie remains in remission and that we have many future Christmases to celebrate and create traditions with him. Since he was born, I will always take a moment to sit alone near the Christmas tree and remember the suckling baby who cooed and smiled at me, his face lit up by the lights on the tree. I will remember that Christmastime was the backdrop that first displayed his life and it was Christmastime that renewed it.