Even Though Chronic Illness Makes It Hard, I Will Never Give Up Hope

Hope is hard when you have a chronic illness. Lately I’ve been very down and depressed. I had been doing better, but there are always ups and downs with chronic illness. It’s just the nature of the beast. When I’m feeling especially down, it’s normally because I feel hopeless, and I’d like to try to explain why it’s so hard to stay hopeful as someone who is chronically ill.

When I decided to try to write and explain why living with a chronic illness can seem so hopeless, I felt really overwhelmed. I didn’t even know where to start, so I actually decided to write about something else! I keep a list of topics I want to write on, and what I realized as I looked for a new topic is that most of the list is made up of the aspects of living with chronic illness that make it so incredibly daunting, and that these things are what join forces to suffocate any hopeful feelings that may arise. So I’m going to say a little about some of these issues that arise that can lead to feelings of hopelessness. 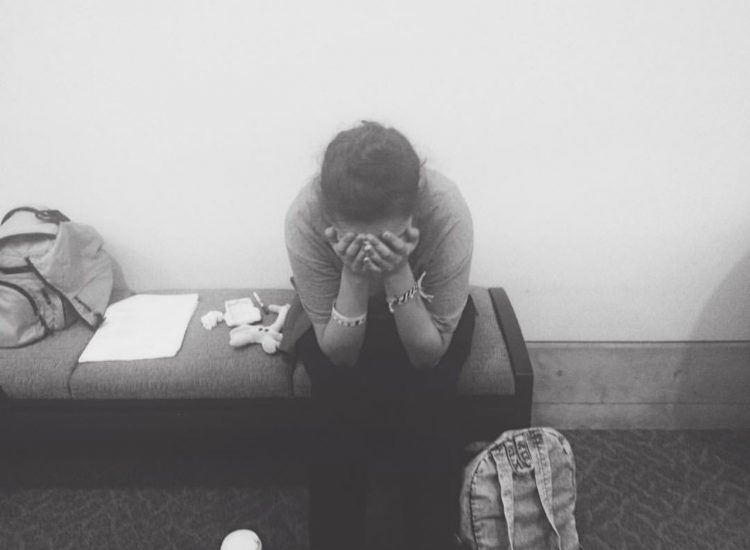 The first hope-sucker is obvious: physical pain. Most chronic illnesses come with frequent, if not constant, pain. Pain is typically thought of as the opposite or the absence of pleasure. Everybody knows this. Any amount of pain is unpleasant, and when pain endures for longer than it’s expected, panic can set in. What if this doesn’t go away? Hope can quickly begin to fade. Then each time you try a new treatment you get your hopes up just a teeny tiny bit, but when the treatment fails to control or even lessen the pain, you’re let down again.

And when you’re told it looks like your pain is here to stay for the foreseeable future (which is a nice way of saying your disease is chronic and incurable), hope can completely disappear in the blink of an eye. If someone with a chronic illness talks in what seems like a negative way about their pain and the unlikelihood of their diseases getting better, they’re honestly being realistic, not negative. There comes a point where they have to stop being in denial and acknowledge the limitations that have been imposed on them and face up to the fact that they likely aren’t going away anytime soon.

Chronic and incurable, remember? Yeah, sure, it’s within the realm of possibility that within my lifetime my illnesses could be cured. But honestly, it’s a lot more realistic that I’m going to be in pain for the rest of my life. Feeling a bit overwhelmed?

There are also psychological issues that can cause a lack of hope. A great deal of people who are chronically ill have depression. Chronic pain can actually cause depression. What is depression? A mental illness often characterized by a feeling of hopelessness. It makes sense to be depressed when you’re in pain all the time; then you realize the pain may directly be altering your brain chemically and/or structurally, which is obviously beyond your control, making the hopelessness seem to grow even more.

Psychologically, people with chronic illnesses also often have altered self-esteem, which you can read more about in my previous article on self-esteem (if I may do a bit of self-advertising!). This makes it difficult to feel like you’re worth the effort at times. I feel ashamed of my symptoms, my lack of ability, my emotions and my appearance. You wonder what the point is in taking care of yourself when you don’t much like yourself and there’s not much hope that you’ll get better anyways. This can be extremely harmful and is often not an aspect I feel is thought about by outsiders.

Then there’s the lack of understanding. I really don’t know if it’s possible for people to understand what it’s like to be chronically ill unless they themselves are chronically ill or if they take care of someone with a chronic illness (and even then, there’s still quite a barrier). I’ve struggled a lot with this recently. Trying to get through to people has felt so hopeless.

I’ll be upset and my mom, dad, or my boyfriend will be trying to comfort me and will ask what’s wrong, and I’m so tired that at times I don’t even feel like using my energy to try to explain pain I know they can’t understand. And it’s not their fault, and it’s not my fault, and for some reason that makes it all the more frustrating because there’s nothing to direct my anger and frustration at! I so appreciate them always asking and being patient when it takes me a while to answer, but it’s hard.

Writing has been so therapeutic for me, but when my depression came back full-force recently, I started wondering, what’s the point? It’s the healthy people I need to help make more aware and help understand, because obviously people with chronic illnesses get it, but I don’t think they’re ever going to be able to understand no matter what I do, so why try? We need awareness and research and understanding and it feels like we’re never gonna get that and nothing’s ever going to change.

I often feel invisible, as well. My illness has such an incredible impact on me every day and yet it’s invisible and it’s my internal experiences being impacted; it doesn’t directly affect the way anyone else is perceiving the world every minute like it does for me. So I feel completely misunderstood and like huge parts of me just don’t exist in the world. I don’t know if that makes sense to anybody else but that’s how it seems in my head sometimes. And maybe everyone feels like that. I really don’t know.

Feeling invisible is also due to talking to people and trying to make those hidden parts and experiences I have known, and having my words misunderstood or ignored or invalidated. That’s why those parts of me are hidden. Because I’ve tried and the miscommunication and minimization is more painful than just hiding sometimes. I know that to some degree, as I’ve said, it probably isn’t possible for people to fully understand my pain. But a lot of people don’t try and won’t even empathize or sympathize. They don’t even listen to what I’m saying. They invalidate my experiences. This includes doctors. Sometimes they’re the worst ones at this. But I feel invisible because my problems are at times willfully ignored and remain invisible to a world that doesn’t want to see. Not that there aren’t any kind people in the world, there definitely are, it just starts to feel like the bad outweighs the good at times.

Next comes the guilt. Like I said, I don’t know that I have a right to feel the way I do. I feel selfish every day because of how much care I need and how little I can give back. And I don’t know that, realistically, I’ll ever feel well enough to be able to accomplish my dreams, work full-time, pay my own way or pay back my parents for everything they’ve done for me. I feel like a burden no matter how often people tell me I’m not, and I don’t see a way I’m ever going to be self-sufficient. It seems hopeless. It feels like it’s just going to get worse and worse.

And hey guys, don’t forget about our friend, Pain! Pain has been here for us through all of this, every moment, and will be with us ‘til the end, always pushing any emotion to the extreme. That’s something healthy people have the luxury of forgetting: that the pain, the exhaustion it causes and any other physical symptoms of the diseases are always there. Sometimes I’ll have an OK day mentally, but I’ll end up being broken down by the pain by the end of the night. Back to that hopeless feeling. Sometimes it feels like it doesn’t even matter how well I’m doing, the pain can and will try its best to crush me at every turn, and sometimes just that knowledge alone – that this is forever – is completely overwhelming.

After six years of living with all of this, you’d think I would’ve learned not to get my hopes up anymore. But that’s not the case. Even when I tell myself, “OK, don’t get excited, this medication will fail just like the others,” or something similar, there’s always a tiny sliver of hope that remains. No matter how hard I may try to squash it. And I think that’s what makes the human spirit so durable: its capacity for hope. I’m sure I’m not the first to realize this.

It might seem ridiculous at times, given I just spent all that time listing reason after reason that someone with a chronic illness may feel hopeless. But if there weren’t still both the capacity and reasons to hope in the face of adversity, I don’t know that I would still be alive.

I didn’t write this with the intention of depressing anyone or adding to anyone’s depression, and I apologize if I did. I wrote this intending to be as real and open as I could. I feel it’s important to talk about the negative parts of chronic illness, and to not always lessen the severity because it makes others uncomfortable. It’s the uncomfortable stuff we need to talk about. Downplaying how bad things can be contributes to why there’s a lack of understanding, and I’m frequently guilty of this.

It’s important to talk about these things because this is all obviously overwhelming for one person to deal with, so in order to prevent it from becoming all-consuming, we need to be able to discuss these things with those close to us. Being able to express our fears and face them with the support of those who love us is the best way I feel to facilitate renewal of hope.

I wrote this with the hopes (haha) that it might help open the eyes of those who love someone with a chronic illness to the invisible struggles we try so hard to keep hidden, often in attempts to not crush your hope, and that it might help those with chronic illness feel less alone, that it may help them feel that their invisible struggle is seen, and that their bravery for still hoping is important, recognized and admired.

Megan Klenke is a chronically ill 27-year-old. She has a degree in psychology with a minor in philosophy, and currently works at a ballet studio. She is passionate about writing, dancing, neuroscience, and her family, friends, and pet tortoise Joseph.

mkklenke
Want more of The Mighty?
You can find even more stories on our Home page. There, you’ll also find thoughts and questions by our community.
Take Me Home