One thing every single young chronically ill person will tell you about is the incredibly frustrating battle that comes with having an invisible illness. We are constantly trying to regain normalcy in our lives, but also have to roll with the punches through the symptoms our illness brings along for the ride. For example, I can’t do many of my favorite activities anymore – let alone even just be outdoors in ridiculous heat – however, I don’t like being different and asking for help, even when I need it.

Today I went to my alma mater to run a quick errand. I wasn’t feeling particularly great, but I told myself it would only take five minutes and to suck it up and get it over with. I mapped everything out in my head and went to my usual parking space. It’s one of two disability visitors spaces, both of which are always available. I sat for a minute to prepare for my walk up the hill and grumbled in my head about how I wasn’t up to my heart racing today so to just take it slow.

As I began my miniature hike, my heart began to thud swiftly and hard (for those of you who don’t know, when POTSies even just go from sitting to standing our heart literally beats as fast as someone running a marathon… No wonder I’m always so tired!). I walked slowly and carefully up the hill and focused on each step so I wouldn’t trip – that’s just because I’m Krista and a little bit clumsy – it has nothing to do with POTS.

I smiled at two young police officers when I looked up, and as I passed by them I heard one say to the other, “Handicapped? Really?” with a snicker.

My heart stopped – then went back to racing even faster than before. For a split second I was shocked, then brushed it off as my imagination. I always feel embarrassed when people can tell I’m different, and I hate having any sort of extra attention. This makes me feel like people are staring sometimes, even when they’re not really paying too much attention. I had a gut instinct, though, that I needed to turn around when I got to the top of the hill. I wanted to make sure my car was going to be OK in the visitor’s spot and that I didn’t need a university parking pass to be there. Despite having parked at that spot a hundred times, you can never be too careful at my alma mater.

Sure enough, they were smiling and looking at my bright blue sticker with a little black device.

Great, I thought to myself, now I have to trek back down the hill to see what’s going on.

I wasn’t in the mood to deal with confrontation, but I know how ridiculous our school was about ticketing, so I wanted to make sure I wouldn’t have any trouble when I came back from my meeting. Deep down I knew it was because of the way I looked, though, that the officers rushed down to check my credentials. I quickly realized I hadn’t been imagining things with the officer’s remark, and that if he was gutsy enough to say that while I was right next to him, he might be confrontational when I chatted with him about my disability.

“We’re just making sure your pass matches up with your car,” one of the officers replied with a grin. “We know people often take advantage of these spots.”

“I have my DMV card, hang on,” I replied shortly. I wished I had called him out on making a snide remark earlier, but I honestly didn’t think a trained police officer would have been that loud and unprofessional about being so snarky. At least if you’re thinking that about me, keep it to yourself and your partner, don’t bring me into your little joke.

I didn’t smile as I showed my pass. Not smiling at someone when I’m interacting with them is actually one of the hardest things for me to do, but I felt frustrated that I was having to deal with this when I already wasn’t feeling great.

“OK, good,” he replied. “Thanks. We just didn’t want you to be using grandma’s parking pass to get a better parking spot,” he said. “You know – so we can protect people like you who really need it,” he corrected himself.

Honestly, this part of the interaction bugged me a little, but I don’t fault people for saying goofy things like that anymore. I understand it isn’t normal to see a 26-year-old who is disabled but looks healthy, and a lot of people haven’t even really had to interact with someone like me before.

The thing that bothers me about the whole ordeal was the way they went about everything. I completely agree that they should check to make sure I’m actually disabled. People who use the stickers but don’t need them should absolutely get in trouble. The way they went about it was wrong, though. I shouldn’t feel like I am doing something bad by using a disabled parking space when I need one, and I should feel comfortable using the resources that help make my life a little more normal. I already feel embarrassed enough when I have to park in one of those spots at Trader Joe’s and make three trips back and forth to carry $20 worth of groceries to my car without hurting myself. I hate that people stare at me to try and figure out why I am in that blue space, and I hate going grocery shopping with my mom and having people think I am a jerk for making her carry everything to the car by herself. I don’t want to feel like the people who are supposed to be protecting me are also going to give me grief about being a weak 20-something.

I realize the police officers were just trying to do their job, but I also know enough people in that field to know there is a lot of sensitivity training so they can be professional while they are on the job. I would have had absolutely no issues with them checking my pass – even right after I left my car – however, making me feel uncomfortable by being snarky loudly enough for me to hear was completely uncalled for. In hindsight, after talking to a few people about it, the officer more than likely wanted me to hear his comment, as he waited until I was 200 feet from my car and right next to him, and thought he was catching me in the act of something I shouldn’t be doing.

I didn’t write about this to shame the police officer or have a pity party for myself. This is just such a perfect example that you never really know what someone is going through unless they tell you. I look fine, and if you stuck me next to a dozen other 20-somethings you would never guess I was the sick one. I hope this story helps people be more gentle towards other human beings, as you never know what someone else is dealing with. 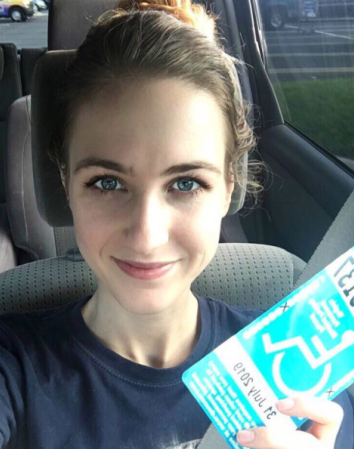 Another reason I wanted to write about this to raise awareness about invisible illnesses is because not everyone with a chronic illness is as bold and open about their problems as I am. A few years ago when I first got POTS, my mom had to be my advocate because I couldn’t even stand without getting incredibly sick. People who are going through things like that should not have any extra obstacles that could easily be avoided, so I think it’s important for me to speak up about my experiences in hopes to better the lives of others who are chronically ill and don’t have someone to advocate for them. A good lesson from all of this is to be kind to everyone you meet, and never make assumptions based on the way someone looks. I am going to be writing a letter to the police department so they can hopefully be better equipped to deal with others who are like me on campus.

This post originally appeared on Single in the Suburbs.

I got sick with POTS &amp; EDS a month after graduating college as I was preparing to move to NYC to start my dream job at Seventeen magazine. Chronically positive, Nutella enthusiast, and dog lover.