31 Difficult Side Effects of Chronic Illness No One's Talking About

When you are diagnosed with a chronic illness, your doctor might prepare you for the major physical symptoms associated with your condition, and it is these symptoms your friends and loved ones are probably most familiar with. But too often there are many other “side effects” left unspoken. Others may know you experience pain or fatigue, but don’t understand the full extent of how debilitating it can be. Some physical symptoms can be uncomfortable to talk about, such as bladder/bowel issues or decreased libido. Then there are the ways illness affects your mental and emotional health, your social life, your ability to work, your core identity. And so many of these effects can be profoundly personal.

We asked our Mighty community to share some of the side effects of chronic illness no one talks about. Although some of these subjects can be uncomfortable to talk about or difficult for others to understand, it’s important to shed some light on the full reality of having a chronic condition to promote awareness and increase empathy. No one should have to face these struggles alone.

1. “I wish someone had told me [about] the debilitating fatigue that comes with it. I can take something for my illness, which helps some. But… there’s nothing I can take for the fatigue that settles so deep, it feels like it’s in my bones.”

2. “Depression, anxiety, feelings of hopelessness, exhaustion, despair, anger, frustration and sadness. It’s like stages of grieving for a life you want but can’t have.”

3. “Having people doubt or question me about my so-called ‘invisible illnesses.’ I would not choose this and am certainly not making anything up, so I shouldn’t have to explain nor justify anything to anybody!”

4. “Loss of intimacy. I have over 30 wounds as a result of an autoimmune disease. My husband and I can’t even sleep in the same bed anymore. Our marriage has really suffered.”

5. “The feeling of being stuck between two worlds. The sick world and the ‘normal’ world. You are too sick to be normal, but not sick enough that you have to be ‘normal.’ Except trying to be like everyone else when you are sick is a struggle and usually just makes you sicker!”

6. “Losing friends because no one gets it and you get so tired of explaining it. It’s not that they are bad friends or people. They just don’t understand because it’s a hard concept. What was hardest for me was when I lost other chronically ill friends because even they didn’t understand.”

7. “The many bathroom breaks that you have to take, and a lot of them are immediate and sudden to the point you get into the habit of carrying spare underwear. No one ever really wants to talk about these symptoms.”

8. “The complete loss of self-worth. People always say that being a productive member of society is the most important thing, so what happens when you can no longer be ‘productive?’”

9. “How hard it is to shower and do basic daily things that others manage to do all before going to work. I can only pick one, for the day, on my bad days. And then there are the days where none are possible. Yet you still feel exhausted by the end of the day. Exhausted, gross and overwhelmed.”

10. “I have an ‘invisible’ illness and can’t work. People have commented that it must be nice to sleep in. It’s not. It’s constantly trying to find self-worth and fighting depression.”

11. “How rarely you can get out and enjoy nature. There are all these memes and advice about how getting out in nature is so good for your mental health. But those of us with debilitating chronic illnesses rarely get out of our homes, and when we do, it’s usually just to go to the doctor or the store. We don’t have the energy to get out into parks and nature trails. It’s one of the things I miss most about my old life.”

12. “The guilt when your partner and children have to pick up the slack when you’re in a flare and can’t help out around the house. I have a great family who don’t pile on the guilt, but I’m good at making myself feel that way on my own.”

13. “The financial cost! No one thinks about all of the unexpected expenses. There’s not just the prescription medication and doctor appointments. There’s over-the-counter meds and specialists like chiropractors and acupuncturists, all of which are recommended by your doctor but none of which are covered by insurance. There’s the loss of income from repeated sick days or being unable to work. There are special foods now, ones that don’t trigger you. There is the food that goes to waste because you bought it, planning a meal, and then were too sick to cook or even eat. There’s all the eating out when you’re too tired to make a meal. And don’t forget all the extra tools – canes, wheelchairs, ramps, special clothes, heading pads/ice packs, TENS units or e-stim units, and on and on. Being sick is so expensive!”

14. “[No one talks about] the uncertainty. You can be fine one minute and not the next. The unpredictable nature of the condition means you can’t always plan [ahead].”

15. “How frustrating finding a doctor who cares or understands can be.”

16. “Because my chronic illness is invisible (IBD), I live with the constant ‘you look great!’ comments, which are nice to hear, but don’t at all account for the endless body discomfort and fatigue I feel.”

17. “What I don’t hear about is incontinence. The fact that our bodies are so unique to said chronic illnesses reek of tummy problems. It can be really bad enough that you don’t want to eat out at a restaurant or you have to know where the closest restroom is, just in case. I know I never had to think about that before.”

18. “I’m limited to the salad section of a menu in general at restaurants. At home I can cook so many options but at a restaurant I can’t control enough to know I’m eating according to my diet. It seems small, but I love food and being limited to salads when out is irritating.”

19. “Things I used to do with ease are difficult on some days. When I was well I never even thought about having to rest after a shower. The simplest things that well people take for granted can be so energy draining.”

20. “Dating becomes significantly more difficult than it was before I became sick, especially on apps like Tinder. Guys don’t know how to react to finding out the girl they’re talking to is sick, and more often than not it makes them uncomfortable.”

21. “No one talks about the lack of control over your life and lack of choices you now have. I had aspirations to have a professional career and move to a different country but there is no way I would ever manage to work full-time again in order to afford it.”

22. “Your sense of reality can be greatly affected as a lot of things are experienced through a screen, whether it’s TV/Netflix shows or the internet.”

23. “A diagnosis is the beginning, not the resolution. [Chronic illness] isn’t the single arc of coming to terms/overcoming that the media clings to. The stages of grief come in cycles with each new issue or lost milestone.”

24. “Memories of what life was like before becoming (disablingly) ill fading and being displaced by the intrusive and overwhelming reality that regardless of my aspirations, this is what it’s going to be like from now on.”

25. “You have to buy new clothes more often because you keep gaining or losing weight (or both), or suddenly this fabric makes your skin react, or the tightness in your chest makes you need looser fitting tops just to feel less hellish, or certain clothing types/cuts leave lines/imprints all over your skin, or you can’t walk in heels like you used to.”

26. “How it’s not only you (the person with the chronic illnesses) that needs support, but the carers need support too, and having that support for them is just as important.”

27. “Feeling left behind, stuck wading through being sick while all your peers graduate/get [degrees] or jobs/move away from home/get married while you have to accept that you can’t do those things right now, that everything you thought you’d achieve in your 20s is unlikely to happen until you’re older, if at all.”

28. “Everyone mentions that ‘Oh, your neck will hurt’ or ‘There will be terrible fatigue.’ No one mentions the pain felt in the smallest places: your earlobes, the space between your toes, your lips.”

29. “How your brain does a complete 360. Small things upset you more than they used to, you’re depressed, anxious and have no patience. The same things you used to do with ease now require much effort. No one understands how I feel unless they have gone through it themselves.”

30. “Having the stigma [chronic illness] has gotten from TV shows and movies. Trying to overcome that and explain the real illness.”

31. “You will almost never get just one diagnosis and treatment. If something goes wrong with your body, something else will [often] go wrong too, often several somethings, and they will all need to be managed – which can get very complicated!” 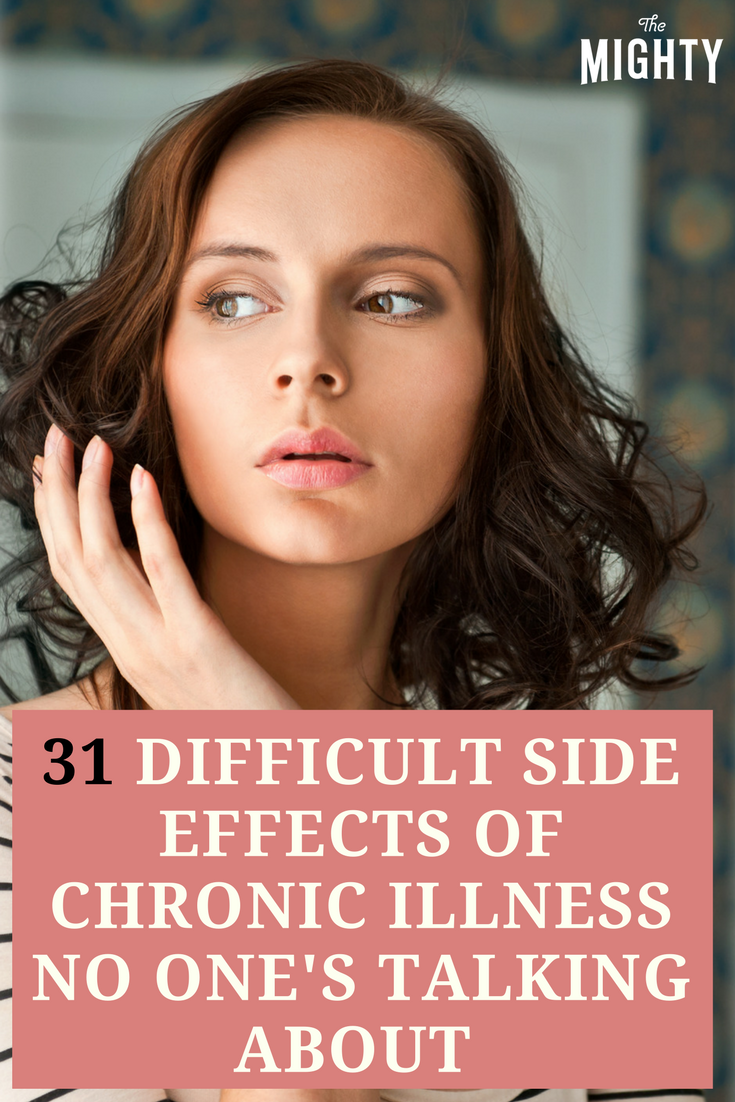