When you live with chronic illnesses, the things that make your life a little more bearable become invaluable. For me, this is live-streaming on Twitch — a platform where you can watch your favorite gamers play and communicate with them.

When I decided to start openly sharing the ugly truth of my conditions with the people who watch me stream, it was daunting. I did not want my health to be the primary focus of the stream and to most people I look “normal” — even though I sometimes lose feeling and control of the muscles in my face. But if I could make more people aware of the difficulties of invisible illness, my slight discomfort would be worth it. So sometimes there would be discussions about various physical and mental health conditions during the stream. Luckily for me, the community supported me all the way and was incredibly kind — even more so during the unfortunate event that happened the first week of February.

I began my stream and things were going well. The wonderful community was keeping me company. My phone lit up, so I picked it up to just glance at it, noticing a Twitter notification was in the banner too. I only saw a few words which were utterly perplexing. I didn’t even know the person or why they were tagging me. I had almost forgotten I was streaming for a moment. I wanted to understand what on earth this was. As I opened it within the app, I saw there were two messages directed at me, questioning the validity of my disabilities. I felt disgusted. Trolls and the internet come hand-in-hand, but this matter felt different. 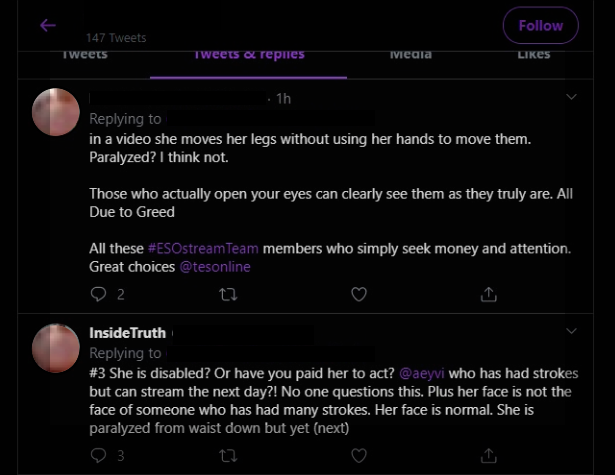 [Image description: Tweet #1 reads: In a video she moves her legs without using her hands to move them. Paralyzed? I think not. Those who actually open their eyes can clearly see them as they truly are. All due to greed. All these #ESOStreamTeam members who simply seek money and attention. Great choices @tesonline.

Tweet #2 reads: She is disabled? Or have you paid her to act? @aeyvi who has had strokes but can stream the next day? No one questions this. Plus her face is not the face of someone how has had many strokes. Her face is normal. She is paralyzed from the waist down but yet…]

When I first read the message I believed I handled it fairly well and controlled my emotions. However, as I began to process the lengths of which this person had gone through to accuse me of faking my disability, being “paid to act” and in it for “greed,” I began to feel more and more disgusted and upset. The thought that someone would think I was capable of such an action made me sad beyond words.

Chronic illness has been part of my life since I was 14 when I had my first operation for severe polycystic ovary syndrome (PCOS). I later developed more serious complications with endometriosis, and throughout my teens and my 20’s, had a total of six operations. In 2012, I was taken to the hospital for suspected stroke and thrombolysis. Due to a string of misdiagnoses, my health worsened over the years to the point where in 2018, I was unable to walk properly and started using a wheelchair.

That year, I was mostly confined to one room and had to be cared for almost entirely. I only really left the house for hospital appointments. At the end of 2018, I finally received the diagnoses of dysautonomia, postural orthostatic tachycardia syndrome (POTS) and Ehlers-Danlos syndrome in addition to pre-existing conditions.

For years I have been fighting against this type of arrogant, uneducated and presumptuous attitude. This exact attitude is the primary reason I lived through seven years of uncertainty, unnecessary medical procedures, needless medicines and countless stressful doctor’s appointments. Through my own research and perseverance, I found the right specialist to do the simple tests that would confirm my condition.

I couldn’t really understand at the time why this person felt the need to make such accusations. I have never discussed my disabilities with him, which was obvious from his unfortunate assumption that to be disabled or using a wheelchair you must be “paralyzed” and to have stroke-like symptoms you must have had “several strokes.”

Meanwhile, while I was still streaming, this message — and all the feelings and trauma it brought up — set off a massive anxiety attack. As I reacted in real-time, tearing up and talking about my health journey, I received insurmountable support from those in my Twitch channel, offering so many kind words of support. Many stayed to keep me company, which meant such a great deal to me I’m lucky and thankful to have them give so much of their time to me.

After about three hours of sleep, I woke to a message saying, “I saw you on TwitchFail Reddit, I’m so sorry, I support you.” I had no idea and so went to look and there I was, blubbering away on Reddit with hundreds of comments and counting. Many were supportive, but many were short-sighted or cruel. My partner told me there were thousands of views on the clips and it was growing very quickly. I was sent various articles that were popping up, which I had not even been consulted about.

Although it was embarrassing, my embarrassment is insignificant compared to the fact that everything about this experience — from the initial poster to the comments on Reddit — brought to light the exact attitude I’m trying to work against, and ultimately I was glad the articles highlighted that.

I think this experience will help me grow stronger. A huge problem facing those with invisible illness is public perception. When my endometriosis was left misdiagnosed for so long, it had attacked many of my abdominal organs. I used to lie screaming and crying on the bathroom floor. I was told it was “in my head” by a top London professor in gastroenterology. Some days I was able to drive, get to work and generally looked “fine” from the outside, but inside I was always in pain and I was struggling to cope. I know I’m not alone in this experience.

For anyone else who has been in a similar situation, try to stay strong. We are not made of stone, and living with a chronic illness can affect your mental health as well. If you are able to, surround yourself with a support network or a few close friends you can talk to.

If you are a streamer, it’s crucial to have a good moderation team no matter your audience size. My channel is very strict when it comes to the ban hammer and for good reason. Streaming costs a great deal of my energy, I do not need to sacrifice my health to deal with trolling. If it helps you to feel more supported, you can always make sure the rules list is in your channel panels. It may also be worth seeking out other streamers in a similar situation to help you build a stronger streaming network.

For those who have been targeted by any form of harassment regarding a disability or illness, I cannot undo the damage they have done with their words or actions. I know I, at least, will be using my experiences to promote awareness and provide support, through both steams and through Project Eir, which I hope will provide resources for disabled and chronically ill streamers.

At the end of the day, you can never know how much another person is struggling, and you cannot feel what they feel or truly understand their circumstances. It’s not the right of another to judge. Archaic attitudes need to move forward and someday I hope this can be achieved.