Anyone who lives with a chronic health condition knows how frustrating it can be to deal with family and friends who either just don’t understand or flat out don’t care.

Yes, it’s true that most people won’t understand something until they go through it themselves. This isn’t really an excuse for overt selfishness and total lack of compassion, though.

If you are a family member or friend of someone who struggles with a physical/mental illness or disability, here are some things you want to be mindful of. You might be engaging in some of these behaviors knowingly or unknowingly. Either way, it’s unhelpful and hurtful.

1. Expecting them to get over it. It absolutely does not work like that. Trust me. I promise you. Nobody “gets over” an illness or disability.

2. Expecting them to be there for you for any problem you may have, but refusing to take the time to be there for them. This includes calling to ask how they are, asking if doctor appointments and tests went OK and asking them if they need to talk about what’s bothering them. It’s a two-way street. I’ve listened with empathy to stories of divorce, problems with children, sick parents, boyfriend problems, financial struggles, etc. Surely you can give me the same consideration. Calling them to constantly complain about your problems while never acknowledging theirs is thoughtless and selfish.

3. Minimizing their struggles and health concerns. Speaking to them like their problems aren’t valid or making things into a competition will only make things worse for them and make them not like you. Which leads me to my next point…

4. Making illness and life situations into a contest. Contrary to what some may think, none of us are in the running for a medal or an award for who is the sickest. I don’t play that game and neither should anyone else. We are all fighting our individual battles and demons to the best of our ability. Don’t spend your time debating who has it worse. It’s insulting and it’s a waste of time.

5. Forgetting birthdays. This one sounds a little petty, but the truth is, birthdays can be lonely for people who have an invisible or chronic illness. Sending a card or text or calling can make a difference. Most of us have smartphones that remind us when someone comments on our Facebook status. Surely you can find a way to set a reminder to remember a loved one’s birthday.

6. Ignoring them. The worst thing you can do is pretend someone doesn’t exist. It’s the ultimate insult.

7. Blaming them for their illness. Most of us did not choose to be sick. We are most likely trying everything we can to get better. Medications can cause weight gain, fatigue and other health issues. Our illness alone is enough to wear us out. This can lead to or worsen symptoms of depression and anxiety. It also increases feelings of isolation. Don’t blame us for something we cannot control. There are days where the fight is too hard and we need time off. This is not being weak. It’s called taking care of yourself.

8. Telling them it’s all in their head. This is basically the verbal equivalent of slapping or spitting in someone’s face. Just don’t do it – ever.

If you’re doing any of these things, please stop. If you aren’t sure if you are doing these things, print out this list and run it by the person. They will probably tell you if you are guilty of the above. They may even have some pieces of advice of their own to add. Listen and pay attention to what they have to say.

Thank you for listening. 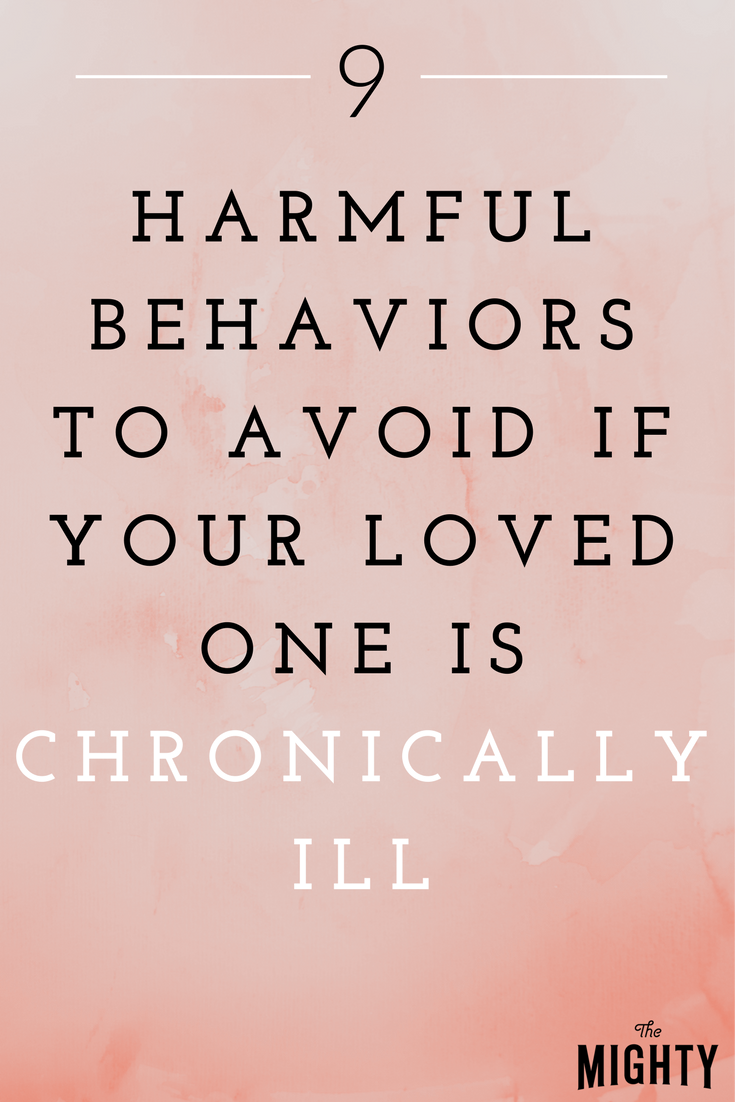 I ask a lot of questions. I battle a lot of demons. I try to live life one day at a time. I usually fail. Lover of humor, music, film, tv, Broadway, carbs, anthropology, nature and literature. I'm passionate and quirky. I wear my heart on my sleeve — on the inside of my sleeve, just so you can’t see. stephenfratello.com

stephen-fratello
Want more of The Mighty?
You can find even more stories on our Home page. There, you’ll also find thoughts and questions by our community.
Take Me Home