What John Oliver Missed About the Opioid Addiction Epidemic

This week’s episode of “Last Week Tonight with John Oliver” touched upon the very serious issue of opioid addiction in America. When the segment began, I was excited. I have Ehlers-Danlos syndrome, fibromyalgia, degenerative disc disease, temporomandibular joint disorder (TMJ), and osteoarthritis, just to name the ones that might require pain management. John Oliver has a reputation for calling out bullshit when he sees it, and I was eager to hear him take down the irresponsible practices that have led to so many chronic pain patients being treated like addicts, and/or left in pain. That is not what he did.

He talked about how irresponsible prescribing practices have caused people to literally break their own bones repeatedly just to get their hands on OxyContin. He talked about how the pharma company Purdue was fined more than $600 million for its contribution to the opioid epidemic that has killed countless people across the country. But he didn’t talk about how the backlash of those things has demonized people who live in chronic pain. He didn’t talk about the way it has created a system whereby to get the treatment you require, you often have to sign a contract that is essentially an admission that you will become a hopeless junkie unless you are strictly monitored.

So I’m going to talk about it.

Because, you see, if you live in chronic pain, before you can begin treatment, you first have to prove you can be trusted. And your word isn’t good enough, your medical history isn’t good enough, your diagnosis isn’t good enough. What you need to do is sign a contract that essentially puts you on probation even though you haven’t committed a crime. Without it you will be denied any controlled substance pain management medications from that doctor, and in many cases you will be denied care altogether. Break the contract and you will have a nearly impossible time of finding a new doctor or pharmacy that will work with you.

So what is this contract? What’s so bad about it? Let me show you the one I was most recently presented with at my orthopedist’s office for a hand injury. The reason it’s partially filled out is because they slipped it in with my annual renewal papers and I didn’t realize what it was until I began reading (I always read what I sign, and you should too – this is why!). 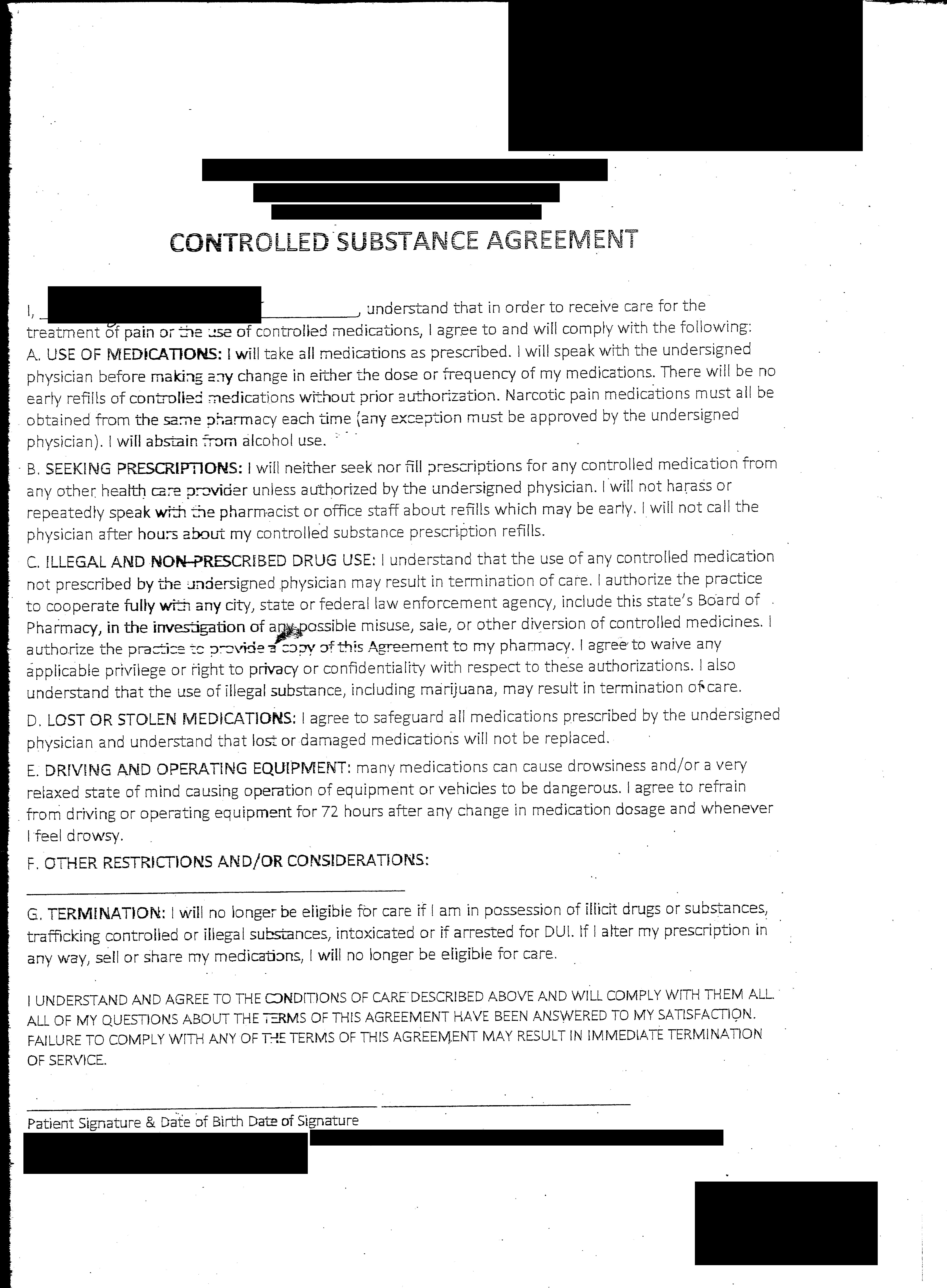 Nobody informed me it would be added, and when I asked why it was given to me they explained that to obtain any controlled substances, I would have to agree to these terms. Failure to comply meant that even though my orthopedists (I have one for my knees and one for my hands) will see me, I can never get a prescription for a narcotic or opioid painkiller from them. Not if I broke my leg, not if I tore every tendon in my hand. No contract, no medication, no negotiations. Some doctors will not even see you if you refuse to sign this contract. Luckily, my doctor was still willing to see me even though I refused to sign or even give back the partially completed form.

It gets much worse than that, though.

It also requires that you abstain from alcohol, even though I’m over 21 and when I was still in the waiting room filling out this form, it hadn’t even been determined that I needed a medication that would interact with alcohol. It also includes abstaining from all illegal substances, including marijuana – even though I live in state, I moved to a state, where it’s legal with a prescription. And how would they know? Well I would have to submit to regular urinalysis to make sure. I would also have to submit to pill counts to make sure I took my medication exactly as prescribed, which would also be verified through my pee tests so they’d know I wasn’t selling my pills.

Now, I am “lucky” in a really twisted way. Never in my life have I requested a painkiller stronger than Tramadol, a non-narcotic painkiller which is frequently considered the “kiddie” version of a painkiller. This is due directly to my intolerance of stronger medications and the fact that they don’t help my pain but instead make me violently ill. Since I was old enough to decide for myself, I have refused every opioid offered to me, including after five surgeries (I did make the mistake of taking the prescribed Vicodin after I had my wisdom teeth removed and that was when I discovered that I’m both allergic to it and capable of projectile vomiting into a vessel 3 feet away from my face). The only way I can tolerate any opioid is intravenously, and even then I require anti-nausea medication and I cannot function at all until everything has worn off.

Simply put: there is nothing in my history to ever indicate that I would become addicted to opioids because I cannot take them. The only thing I can use to manage the relentless pain and nausea brought about by my ailments is medical marijuana, which is why I moved across the country to a state where I could legally and safely obtain it. So for me, not signing this contract was no big deal because frankly, I was never going to ask or accept any opioids anyway and I don’t care if they won’t give them to me.

That is not true for many chronic pain patients, however, and the use of these contracts is nothing short of assuming every patient is guilty of drug abuse. It begins your doctor-patient relationship with suspicion and shame. While I myself have never had to jump through these hoops, I have watched so many friends have to sacrifice money meant for bills or food just to afford their copays to go in for their regular urinalysis and pill count. I have friends who were forced to give up their legally obtained and prescribed medical marijuana, sometimes being held hostage by pain after surgery until they finally agree just to get some relief… and then they’re trapped. Every day I see a post on a support group or in social media from a chronically ill person who is questioning their self-worth and feeling like a failure because they can’t manage the pain of their Crohn’s disease, or the multiple dislocations a day from Ehlers-Danlos syndrome, or permanent nerve damage without opioid pain killers. These are conditions that have no known cures, and these people will never stop being in pain. In fact, the likelihood is their pain will increase as their conditions progress. Thanks to these new regulations, many of them will be forced to live in pain. Some may even end their own lives rather than continue to live in pain.

So yes, John Oliver’s most recent episode of Last Week Tonight did raise some very salient points. Yet he missed a tragic part of the story: pharmaceutical companies encouraged these irresponsible practices and got so many people who did not need opioids addicted to them that the people who actually need these medications to have any quality of life cannot get their medications without first being subjected to humiliating assumptions and then forced to repeatedly prove they’re not addicts. And that is no quality of life at all.

Sally-Rouge is an artist, author and advocate living in the American Southwest, where she recently relocated from the Philadelphia region to help mitigate the symptoms of her multiple chronic illnesses. Deep in the sandy desert, she courageously battles against fibromyalgia, Ehlers-Danlos Syndrome, gastroparesis, degenerative disc disease, and an alphabet soup of secondary conditions. In her previous life before “Total and Permanent Disability,” she earned her degrees in criminal justice (A.S.), political science (B.A.), and education (M.Ed.). She was also an animal rescuer, model, singer, public speaker, performer, played in LARPs and regularly attended and worked at science fiction conventions and events. When her spoons are in the positive, Sally enjoys playing video games, voice acting, cosplay, sewing and all things arts-and-crafty, as well as advocating for things about which she is most passionate. Her favorite causes are pit bull advocacy and dog rescue, disability advocacy, and political revolution.