How Dungeons and Dragons Helps Me Through Tough Times With Illness

I have fallen in love. He’s smart, he’s funny, he’s kind, he’s three feet tall. He’s not so good about knowing social norms and he has a habit of sticking his wand at his enemies gonads and threatening to blow them off with a magic missile. His name is Korrin Tealeaf and he’s a Level 12 Gnome Storm Sorcerer.

I’ve been spending my Friday nights playing him with my online Dungeons and Dragons group for a few months now. It’s the most alive I have felt in almost seven years and the little guy has definitely kept me from wanting to die over the last three weeks.

Just about seven years ago I was diagnosed with the first of now nine chronic illnesses. Every day I deal with pain, fatigue, nausea, blurry vision, headaches and a mile-long scroll of symptoms. I try everything I can to distract myself: reading, time on the internet, video games… I even tried to teach myself to knit before carpal tunnel syndrome and arthritis killed that idea.

I don’t get out of the house much these days but I really missed the old Second Edition D&D nights with my friends. I had also found information on the Fifth Edition and was really eager to give it a try. But I knew I just did not have the energy to go to a regular DND night at My Local Friendly Game Store. Most days, just taking a shower uses up all the energy I have. So what was I to do?

Then I found it. Roll20.com. Blessed Roll20. I could play from home without expending any energy on just “getting ready” and driving anywhere. It was pretty much a miracle from my point of view. So I went on the hunt for a campaign that looked like fun and also decided to sell some of my old DVDs and books, rolled up some spare changed and bought a Fifth Edition Player’s Handbook.

I got lucky and found myself a damn good group too. They’re fun, smart and experienced players. Surprisingly, they seem to like me too. Or they at least like Korrin.

Every Friday, I’m so excited to play and for those four hours, I honestly feel less pain, less symptoms altogether really (though that damn fatigue! It’s a real bitch!) and I actually have fun. Real fun. It’s more enjoyment than I’ve had in the past seven years. I can almost forget I’m chronically ill. 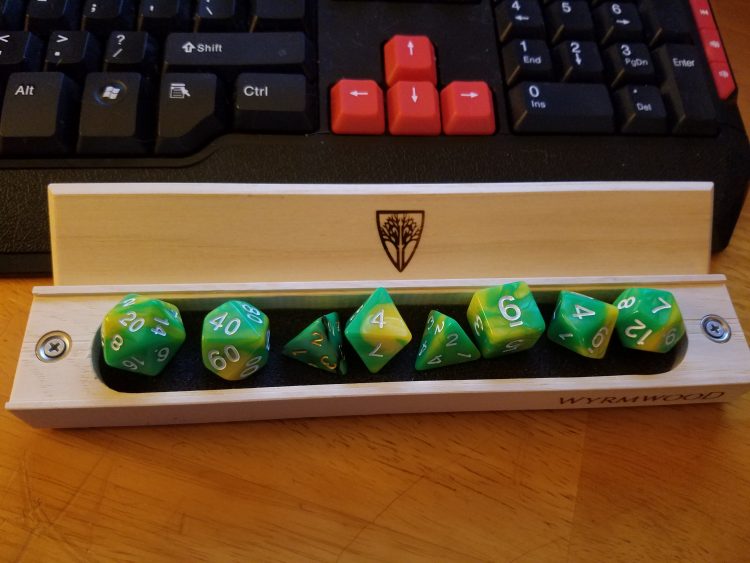 It was especially important to me the previous three weeks when I wanted to die. See, one thing about being chronically ill is that eventually medications stop working and you have to try a new one. Sometimes those new medications are worse for you than the illness. That’s what happened to me. I had to slowly come off of Cymbalta, then slowly ramp up Nortriptyline. Well, that Nortriptyline, let me put it in DND terms:

Imagine you feeling angry one moment, almost into a rage, then suddenly, violently, you wanted to cry, then, suddenly, violently, you wanted to rage again, then cry again. And that went on, nonstop, for three weeks. That’s what happened to me. Yes, I wanted to die. I could not live like that. Fortunately, I talked to my doctor and I was able to come off of it in five days and onto another med that worked out for me.

I still have to live with these chronic illnesses and all the symptoms they bring and I’ll do my best to keep going and I’ll have my bad days, ya know?

But those Friday nights, man, when I can be in Korrin’s head and not my own? They are the best. Even if I am off a little? I will be OK. I have Korrin. I have my fellow adventurers. I can magic missile some bad guy’s gonads off.

Multiple chronicle illnesses, mostly leaving me dealing with chronic pain and fatigue, constantly keep me on the search for any relief or distraction from my symptoms.