Near Trump’s Florida Home, Drive-Thru COVID-19 Testing Gets Off to Rocky Start

A much-needed drive-thru coronavirus testing site opened here Monday, just a few miles from the Mar-a-Lago Club, home to the country’s most high-profile COVID-19 exposure. A week ago, President Donald Trump and a few top aides hosted a festive dinner with Brazilian officials, some later found to be ill with the novel coronavirus.

Despite repeated assertions from White House officials that tests will soon be available to anyone who wants them, residents here found the reality much different. Of the 6,000 people who called for an appointment and hundreds who drove up on Monday, just 65 were able to get tested. Testing officials said they had 80 test kits left for future patients and announced Tuesday they would not take any more appointments.

What’s more, contrary to experts saying that tests would be restricted to those who need it, among those who managed to get the test was at least one worried well person without symptoms and without an increased risk of exposure.

Jay Wolfson, a professor of public health at the University of South Florida in Tampa, said he sees the “potential irony” of communities close to Trump’s home struggling to meet testing demands after the president boasted earlier that anyone could get a test. But he said the situation here Monday showed how ill-prepared the country is for the pandemic.

“We got started late and have a lot of catching up to do,” Wolfson said. “It’s not like a hurricane, where Florida has done it over and over again.”

South Florida has been a concern because it’s been a hot spot for confirmed coronavirus cases. The latest numbers show the area had about half of the state’s total 131 positive cases as of Monday at noon. And Florida is likely to have more than its share of serious cases, requiring hospitalization, because its population skews older.

This test site is run by a federally qualified health center, FoundCare, and opened in its parking lot. FQHCs receive federal funds to provide health services to underserved communities, and they typically send out swabs for testing to hospital and commercial labs — for a wide variety of conditions from strep infections to STDs. With none of the hospitals in the area yet offering COVID-19 testing, center officials decided they had no choice but to set up shop.

Yolette Bonnet, CEO of FoundCare, said dozens of patients experiencing respiratory symptoms were referred to FoundCare last week by the county health department and local doctors, who couldn’t test themselves.

“We know that the best way to control COVID-19 is to keep it contained,” she said. “In order to safeguard FoundCare patients as well as staff in the main location of the health center, while serving those seeking COVID-19 virus testing, we made the decision to set up a drive-thru testing site.”

The health center announced the drive-thru opening late Friday and informed people to call ahead so they could be screened to meet certain medical guidelines and then make an appointment. By 9 a.m. Monday, more than 1,200 people had called the center requesting a test.

Dr. Leslie Diaz, infectious-disease medical director at FoundCare, said priority for testing was being given to health providers, first responders such as police and fire crews, seniors and people with compromised immune systems.

Dozens of cars lined up for the limited number of tests available Monday. Most had to drive away without getting what they wanted. 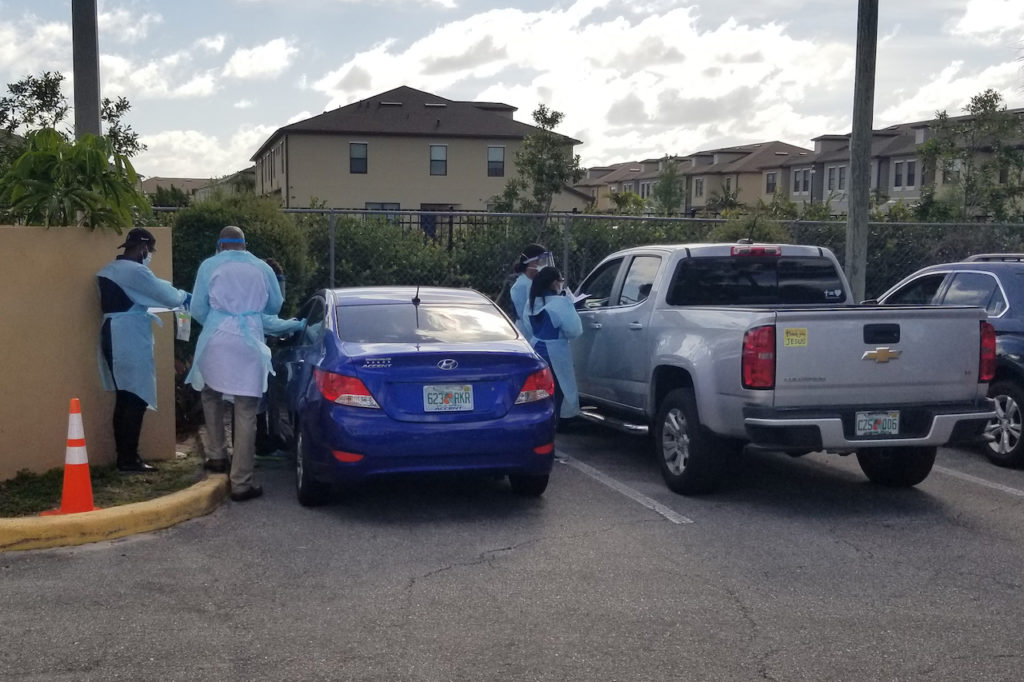 Five known cases of COVID-19, the disease caused by the coronavirus, had been confirmed in Palm Beach County as of Sunday. Four were related to international travel, while the fifth remained under investigation. These numbers do not include the Brazilians at Mar-a-Lago.

The press secretary for Brazilian President Jair Bolsonaro and Brazil’s chargé d’affaires in Washington tested positive for the coronavirus days after they met with Trump at his exclusive Florida club on March 7 and joined a family birthday celebration. And one of nearly 900 attendees at a March 8 Trump Victory committee fundraiser brunch at the club tested positive for coronavirus.

Trump announced Saturday that he has tested negative for the virus.

Mar-a-Lago was getting a “deep cleaning,” including its grand ballroom where the festivities took place, but there is no word if its workers were being tested or being told to self-isolate, under the protocols suggested by the Centers for Disease Control and Prevention.

Operating from a white tent erected in the FoundCare parking lot, medical assistants wearing masks and gloves were taking throat or nasal swabs of patients. The line was orderly, though at times cars were backed up into the street waiting to get into the parking lot.

Diaz said they planned to test 40 people Tuesday. “It’s a difficult situation, but we needed to start doing” drive-thru testing, she said Monday. Then the clinic announced Tuesday that, because its test supply was limited, it would be able to keep only those appointments made for this week. Later appointments will depend on whether more tests can be secured.

Drive-thru testing centers have been set up by health systems and medical practices in at least 10 states from New Rochelle, New York, to Austin, Texas, to San Francisco. Florida has several sites also.

Saskia Popescu, a senior infection prevention epidemiologist at HonorHealth, a large health system in Phoenix, said drive-thru testing is vital because it helps limit patients’ exposure and takes some of the pressure off hospital emergency rooms and urgent care centers. “It’s a positive thing, as we don’t need the worried well inundating the health system,” she said.

Richard Durant, who drove nearly an hour from his home in Fort Lauderdale, got tested Monday. Although he does have a chronic condition, he didn’t meet any of the official criteria for testing. Those include having had close contact with a confirmed COVID-19 case; experiencing a fever or cough or shortness of breath; traveling internationally in the past 14 days; having been on a cruise ship or plane within the past 14 days; or attending a gathering where an outbreak is under investigation.

“I am 68 and have COPD [a lung disease] and I just wanted to make sure I was not positive,” he said.

Durant, who has not been sick and has no signs of the virus, arrived at the clinic about an hour before it was scheduled to open, filled out a form listing his risk factors and then drove around to a parking spot where a medical assistant took a swab of his nose.

Durant said he’s been largely self-quarantining at home and staying away from large groups of people and will continue to do that no matter what the test result is.

“What’s going on around the world is very scary, and I just read up on the Spanish flu that killed millions of people,” said the retired procurement manager at FoundCare. “I know medical science is a lot more advanced now and take solace in that.”