This story reflects an individual’s experience and is not an endorsement from The Mighty. We believe in sharing a variety of perspectives from our community.

Here I go again talking about politics, but it seems to be impossible not to these days. People with every political and religious belief experience mental illness. People of every income level do as well, so I was saddened to see a far-right Black GOP member and veteran shaming Michelle Obama for having depression.

He basically implied since she was rich she should not be depressed, and called her privileged. If I were her and I read his tweet and the cruel comments on it, I personally might become depressed from that alone. This woman is constantly called horrible things and people think it is OK because they do not agree with her politically. They also think it is OK because she is famous. People sign up to be treated like this, right? So it is OK? Many of these people call themselves Christians.

I remember when everything was going great in my life, but I still experienced major anxiety and had to get back on medication. My doctor said I need it like someone with a chronic illness needs their medicine. This GOP tweet guy and everyone who supported his tweet apparently think Robin Williams’s money should have saved him. It upsets me as someone who thought praying hard enough, or having enough faith, or trying to be positive would get me out of depression. Money does not cure it either. We all know how many rich people are depressed or deal with mental illness.

Even if you are not a fan of Michelle Obama, if you want to shame her because you think she talks about inequality while getting rich off politics, that is one thing — but to say she is privileged because she shared she feels depressed?

Also she is sharing it with others, which I think is important, so they know they are not alone. Famous people are often shamed for this, because of course they do not know the struggles of everyday life or of the poor or middle class. Despite that they are telling us they also struggle with mental illness and are trying to break the stigma, you have people like this openly criticizing her for it and being supported, because politics.

Politics makes everything OK. It makes it OK to personally insult and offend your own family and friends or to end relationships with them even in some cases. Apparently you can judge people’s character and their destination in the afterlife by it. Even though I personally know some great Republicans and Democrats, I also know some horrible Republicans and Democrats. I thought that kind of judging actually went against their beliefs too?

I grew up in the deep south. I still vote Republican or Independent or otherwise sometimes, especially in local races, but I vote Democrat as well a lot now too. Being blindly loyal to any person or party actually scares me. I have been shamed for it, I have been unfriended and blocked for it: not for being ugly, just for simply agreeing with Democrats on a lot of things. Although I never return the favor. I remember being scared to tell my family and some friends. I remember being scared to go up and say which party when voting in the primaries, in a small Alabama church with mainly elderly people running the polls.

I remember when there was a runoff election and my stepdad asked if I had voted in it. I told him I couldn’t. He then realized it was because I had voted Democrat. I did not get the reaction I feared; I got the reaction I dreamed of. He told me he voted Democrat when he was younger too. He was just glad I voted and I had to vote my conscience. I know he still was not happy about it and hopes I change my mind one day like he did. I know he tells my mom that is not the daughter he raised. Like he does not realize I was born with a bleeding heart, or he does not remember me constantly not accepting him saying “life is not fair” as a little girl, and me saying it should be. But I was honestly just happy to not be disowned. 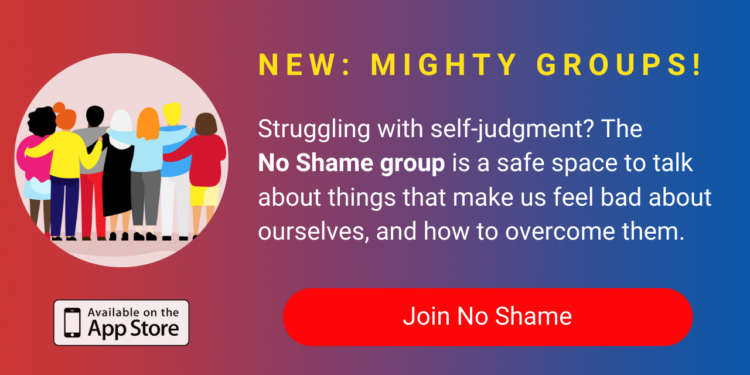 He also once got upset when I was a child, because I was throwing some food away I did not eat. He said there were starving kids elsewhere. He did not always have a lot to eat as a child. I argued with him that unless I was mailing this leftover food to a starving child then what good did it do them for me to eat it when I did not need to? If anything, it felt kind of greedy.

My mom and stepdad will usually tell you I was the easy child that always minded, but that is not completely true, as you can tell from those childhood memories. But I did always at least try to be respectful when I disagreed. I think that can sometimes make all the difference.

justbuyheradress
Want more of The Mighty?
You can find even more stories on our Home page. There, you’ll also find thoughts and questions by our community.
Take Me Home