I’m lucky. I’m a very lucky person. I’ve done some incredible things in my 35 of existence — I’ve climbed the Sydney Harbour Bridge, swam in the Great Barrier Reef, celebrated nine years of marriage to an amazing man, and I was a contestant on Australian cooking show “Zumbo’s Just Desserts” (which can be seen on Netflix). I’m a qualified pastry chef. I consider myself fortunate.

Seven years ago, my life was incredibly different.

Seven years ago, I didn’t know if I would see Christmas. I was dying of the type 1 diabetes that I had diagnosed with as a baby — suffering from nearly all of the disease’s complications: kidney failure, a stroke, gastroparesis, limited sensation in my fingers and toes, and vision loss — and I had already cheated death on two separate occasions, having survived diabetic ketoacidosis a week prior to my 15th birthday, and then necrotising fasciitis (the flesh-eating bacteria) when I was 23. My future wasn’t looking very promising, and as a last-ditch effort, I was listed for a kidney and pancreas transplant. And then I waited. 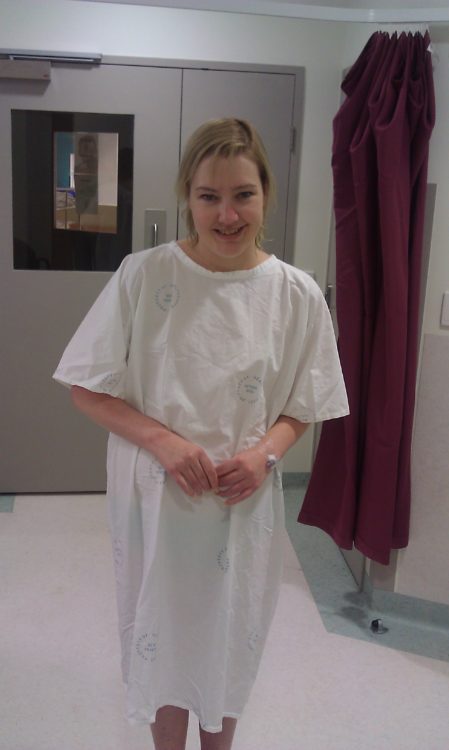 Waiting is hard — waiting for the train is hard, waiting in line at the grocery store is hard, and don’t get me started on waiting for a coffee on a Monday morning — but waiting for a call to say that organs had been located was excruciating. Thankfully, I waited only nine months, on dialysis the entire time, to get my call. The moment I woke up from eight hours of surgery I felt as though I could run from one side of Sydney where I lived to the other. One week after my operation, I left the hospital, and despite my necessary medical appointments, I managed to start rebuilding a semblance of what I thought was a normal life.

For me, growing up and entering the workforce with type 1 diabetes was easy at first. I mean, I was 18 and could easily burn the candle at both ends, but not long after I noticed my vision starting to fail me, my body did too – in many, many ways, and as things shifted from bad to worse, my ability to be employed and financially independent did too — for over 10 years now, well into my life post-transplant.

If you’ve ever been sick, even if it’s “just” a cold, you may have needed to take a day or two off work to rest and recuperate. For many transplant recipients, this can be massively amplified due to being immunosuppressed (so that our bodies don’t attack our precious donated organs) and a simple cold or bout of gastro can wind up not just requiring a day or two off work, but sometimes weeks and a stint in hospital. Job? What job?

It’s far more important to look after our bodies — something that everyone should really do anyway — and get better. This is a hard lesson to learn, and for me, no amount of disclosure or explaining and perceived understanding on an employers’ part would match the reality of what life as a transplant recipient or person with chronic illness sufferer could be like on occasion. The expectation of a phone call telling me that I had used up all of my sick and annual leave, and my employer actually needed a staff member that came to work became an all too common, yet incredibly defeating occurrence.

To go along with the seemingly endless cycle of interviews, work, hospital and back again comes the isolation of not working and being unwell. There were (and still are) times when I can’t find a reason to leave the house. One day becomes two, two becomes five, and before you know it, it’s been a fortnight and the most strenuous thing that you do all day is change from one pair of pajamas to another.

Neither of these scenarios are a way to live, and I’m not the only one who has experienced both of these situations. I’ve spoken with many people with chronic illness and transplant recipients also lamented their lack of stable work and social isolation, but they also spoke of issues that were heartbreaking to hear — some didn’t feel comfortable and chose to hide their condition, hoping it would fly under the radar, some spoke of having to explain gaps in their employment history and feeling dismissed once they explained and one person even said that they had been bullied, teased and referred to as “soft” because they became unwell seemingly easily.

That comment broke my heart. Every recipient, every person I know who has seen more than their fair share of hospitals and doctors is far tougher than most people, and the thought of anyone being criticized in such a way steeled my resolve to change things.

And so, The Sweetest Gift was born – a place where a sense of normality could be created for people who had led somewhat less than “normal” lives. The Sweetest Gift is an Australian charity aiming to change the face and perception of chronic illness by opening (first one, then many!) dessert restaurants that will employ and train transplant recipients and people with chronic illnesses — people just like myself who have struggled to maintain stable employment, and just need flexibility, support and the understanding that things don’t always go to plan, and that your health can change quite rapidly, and above all your health comes first. The charity restaurant is also a place to feel part of a team, a group of people who are going through things similar to you and know just what you’re feeling — to no feel so alone.

All I’ve ever wanted to do is contribute — to feel as though I’m giving back — and this is the best way that I know how. To offer hope, to offer understanding and offer something that no one else is. I cannot wait to see what this begins!

Working with a chronic health condition is difficult, and no matter how many times I’ve disclosed my conditions before starting a new job, it sadly never seemingly been fully understood by my employers. That doesn’t stop me from being upfront and honest each and every though,  because honesty is, as they day, the best policy, and there are great employers out there who do “get” what life with a chronic illness is like — you just need to hold onto those ones when you find them!