I decided to do a little experiment. I went to the mall and asked strangers a question,
“When I say the word ‘diabetes,’ what is the first thing that pops into your
mind?” 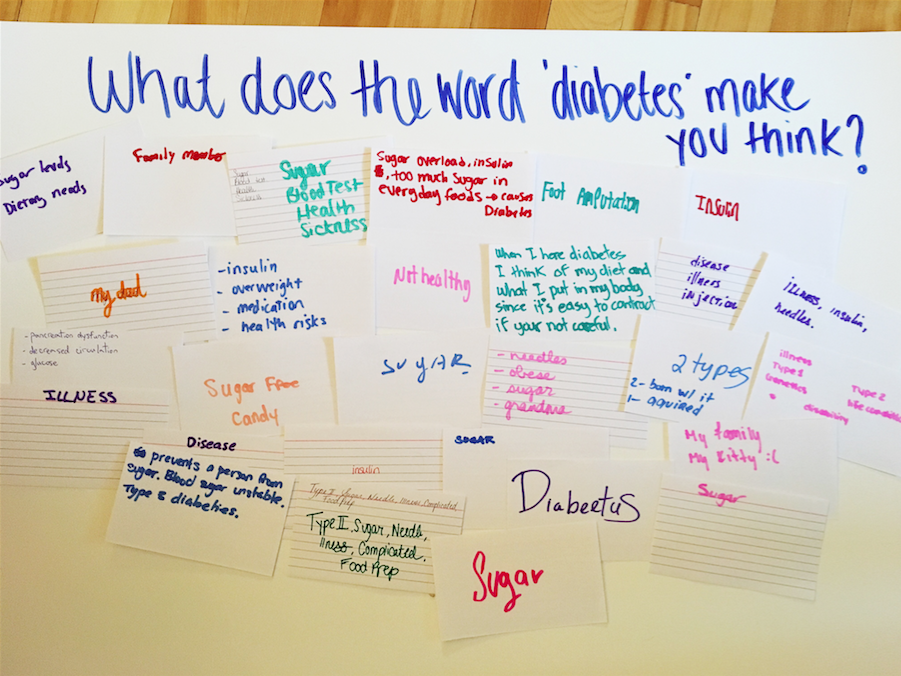 If we look at the things written down in the picture above, you’ll see about half of them appear to have a decent understanding. Yes, diabetes is an illness and a disease. Yes, for many it does involve needles. Some people thought of a family member who was affected. A couple of people even knew there was more than one type of diabetes.

So where does the problem come in? About half the responses included the word “sugar.” Most disturbingly, upon further discussion I learned this was literally all the knowledge some people had about diabetes.

I’m sure you’ve seen it before on social media. You see a picture of an indulgent dessert, and you click on the comments. “DIABETES,” someone said. You’re reading someone’s Facebook status and it reads, “If John had 20 candy bars, then Joe gave him 2, what does he have now? Diabetes. John has diabetes.” Again, you click on the comments to see that they’re full of “LOLs,” “HAHAHAs,” and praise for the hilarious joke. The thing is… it’s not hilarious. It’s horribly offensive.Diabetes is not a candy bar. Diabetes is a devastating disease that can happen
to anyone. It doesn’t matter if you have the healthiest diet on the planet and exercise multiple times a week. It doesn’t matter if you’re a professional athlete. Diabetes can happen to anyone, and it will change a life forever.

There are multiple types of diabetes, and none of them are OK to poke fun at. Type 1, which I have, is an autoimmune disease where the body attacks the insulin producing cells in the pancreas, leaving the body with no insulin production. There is no cure. Type 2 is a condition in which the body doesn’t produce enough insulin or the body doesn’t use the insulin it makes properly. Yes, extra weight can be a risk factor for this, however many other things can be as well, and you’ll find plenty of Type 2s who are not overweight. This is where genes come into play, and that is not something anyone can control.Life with diabetes is waking up at 3 a.m. shaking with a low blood sugar, stumbling to the kitchen and trying to grab something to treat it before you pass out. Life with diabetes is giving yourself injections, sometimes 10 times a day, or wearing an insulin pump. It is constantly working to make sure your blood sugar doesn’t go too low or too high. It is trying to prevent the devastating complications that can occur if you don’t take care of yourself properly. It is a full time job where one little slip up can cost you your life.

When you make jokes about this disease, you are adding to the stigma, which is already so widespread that correcting the world’s view on it is like moving a mountain. When you make jokes about it, you are trivializing the battle of children who cry at night because they don’t want to get another injection. And they’re going to have to repeat this for the rest of their lives or until there’s a cure.