How old were you when you were diagnosed with type 1 diabetes? Your answer could predict your risk for developing additional autoimmune disorders.

Type 1 diabetes is an autoimmune disorder in which the body’s immune system starts “attacking” the cells of the pancreas that produce insulin. The exact cause of type 1 diabetes is unknown, though some risk factors may include family history, genetics, and possibly exposure to viruses or environmental factors. Although type 1 diabetes can begin at any age, it is most commonly diagnosed between 4 and 7 years old and 10 and 14 years old.

A study published in the journal Diabetes Care in January looked at data from 1,212 patients from the Washington University Diabetes Center and found that people who were diagnosed with type 1 diabetes later in life had a higher risk of developing autoimmune disorders.

Connect with our diabetes community!
Answer this Mighty Member’s question: 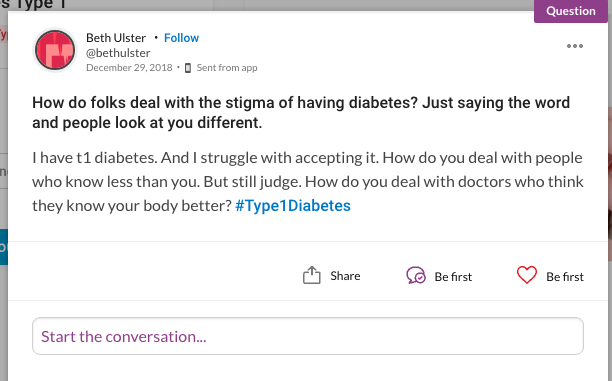 The later study participants were diagnosed, the more likely they were to develop one or more autoimmune diseases.

The study authors recommended that individuals diagnosed with type 1 diabetes at an older age (particularly women) should be monitored for other autoimmune conditions.

Getting diagnosed with a second (or third or fourth) chronic illness can be tough, as Mighty contributor Katie Jo Ramsey discussed. She shared her three tips for getting another diagnosis: Listen to your body, value your health, and let yourself grieve. She wrote:

Giving yourself the space to grieve your illnesses isn’t a pity party. Even though you’re used to being sick, it’s a blow to find out that one more thing is wrong with your body. Let yourself cry about it. Talk to a friend. Go back to see your counselor. (That’s what I did.)

Whether you have one diagnosis, two or five, I hope you’ll be brave and value yourself today.

Want to connect with other people living with type 1 diabetes?

Download the free Mighty app to chat with our supportive T1D community.