Last year my daughter Rachel went to work at a grocery store chain. While there is nothing wrong with that, it just was not what we had envisioned. I shared “My Real Thoughts About Adult Life” in what became one of my most popular blogs ever. I described some of the issues with the “system.” Rachel “said” that she loved it there.

Rachel, who has Down syndrome, is a pleaser. She wants people to be happy. It did not take us long to realize her heart was not in it.  When the job coach was there, she seemed to perform well. When she was not there, there were bumps. From the beginning, Rachel was fearful of corralling the carts in the parking lot, but this was a requirement of the job. I don’t blame her. It was scary.

We overheard self-talk that painted an unhappy picture. She told us a checker was mean to her. We began to discuss with her how she could start looking for another job. We also had the discussion of how we all have jobs we do not love, and we all must do things we do not want to do in our jobs. Could she stick it out for a while? The ever eager to please Rachel said yes, but her actions said something different. While the employer could have done better, Rachel made some poor choices that doomed her time at this particular job.

We had a little “Come to Jesus” meeting with her and started over. We made it clear that this was a bump, and we would all, including me, learn from the experience and re-direct. She immediately seemed happier.

For our family, the point of school and community inclusion for Rachel was never simply about a singular thing. We always believed that an inclusive path was multi-faceted, and the best path for her to be able to live her dreams. One facet was building a circle of support for life. Months earlier a friend we knew from First Act KC where Rachel had done plays and classes, reached out to me. She worked for an area hospital system and thought there might be an opportunity there for Rachel. Working in a hospital setting is something Rachel had often mentioned. But it was a long drive, in traffic, and we just were not sure how we could make that work. We had always said we were willing to drive farther for the right fit, but we just did not know. Still, we discussed it with Rachel and reminded her that she needed to be honest with us about this job opportunity. She said she would like to talk with them and learn more about the job.

Our friend connected us with what I will call the “hospitality” team. We shared Rachel’s resume and within a week there was a Zoom meeting set up for questions and answers and a get to know you type meeting. I was impressed by what I saw and the experience. Rachel had made a list of questions and when the Vice President asked her if she had any questions, she only had one that had not been answered. She wanted to know if she would have a job coach. Who would support her? The answer was that they all worked together to support one another. While she could have a job coach if she needed one, they felt like the team could provide what she needed. She said, “It is just like the Olive Garden. We were a family at Olive Garden.” The Vice President laughed and said that’s right Rachel, we are a family.

While there are some things I’ve learned through this leg of her journey related to navigating her work schedule, job coaches, and the transportation train wreck, I am going to focus on just one key theme. Rachel has been a hospital as a Patient Greeter for six months now. She is happy to go to work. We have also learned more about what is most important to Rachel. Rachel loved her job at the Olive Garden because she felt like she was part of the team. She felt valued. 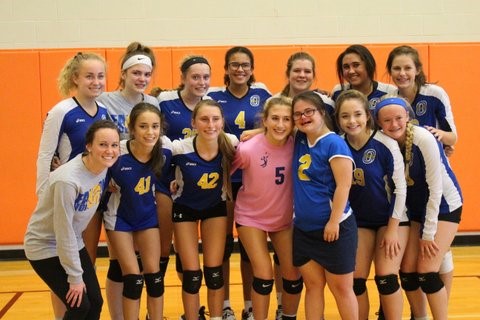 Rachel has always wanted to be involved in everything. She was the volleyball manager and on STUCO for four years of high school. In her theatre program and our church, she felt like she belonged. Her employer had a volunteer event with the Kansas City Royals in July (on the hottest day of the year, I might add.) Rachel does not love the heat, but she signed up and joyfully participated without complaint or fainting. I also volunteered at another gate and did think I might faint. She has told many people about this experience and emphasizes the “we” when she tells the story. The “we” being her employer and co-workers.

My takeaway, that you may say is not earth-shattering, is that Rachel needs to feel like she is part of the team. She wants to belong. She did not feel like she was part of the team at the grocery store. As I look back, that is clear to me. Is that something we could have guessed? Probably not because we thought that the interaction with the customers would be like her experience at Olive Garden. For whatever reason, it was not. Now, however, she feels like she belongs. It is evident when she talks about her work and her interactions. She feels valued.

Really, isn’t that true for most of us? Just as it is not enough to stick people with disabilities in a general education classroom without appropriate supports, the job itself is not enough. It’s the culture of belonging and feeling valued that seals the deal.

NOTE: Rachel approved this story.  After she read it she said, “Mom, I really like this.” While there are a few more things I would like to share, out of respect for her choices, I won’t be sharing about every aspect. I am proud of her for making choices about what she wants shared with the blogosphere.

Jawanda Barnett Mast is mom to 23-year-old Rachel who was born with Down syndrome. Since Rachel’s birth, Jawanda has become an advocate for the rights of people with Down syndrome and other disabilities. She is host of the Disability Blog “TheSassySoutherGal” and founder of the #321Advocate Social Media Advocacy Group. Jawanda has spent 30+ years working in community education and volunteer management through various non-profit organizations. She is passionate about the inclusion of individuals with Down syndrome and other significant intellectual disabilities in the classroom and community and advocating for effective public policies that support individuals with disabilities. She and her husband Jonathan are both graduates of the University of Arkansas and make their home in the Kansas City suburb of Olathe, KS. Her daughter Rachel received a diploma in 2018 from Olathe South High School. She completed three semesters in the Missouri State University Bear POWER program in Springfield, MO, a Project SEARCH internship program, and currently works as a Patient Greeter at the University of Kansas Medical Center. Rachel loves comforting others and says the best thing about her job is being part of the KU MED family!

jawandamast
Want more of The Mighty?
You can find even more stories on our Home page. There, you’ll also find thoughts and questions by our community.
Take Me Home