Have you ever gone to the doctor telling them that you didn’t feel OK, only for them to dismiss you and to then find out that you were right and they were wrong the whole time?

If so, you’ll definitely be able to relate to pop star Halsey, who has been recently diagnosed with the four conditions Ehlers-Danlos syndrome, Sjogren’s syndrome, mast cell activation syndrome and POTS (postural orthostatic tachycardia syndrome). 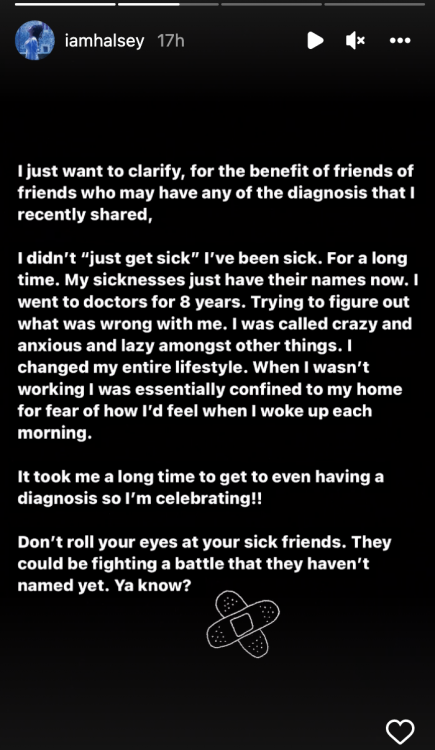 “I just want to clarify, for the benefit of friends of friends who may have any of the diagnoses that I recently shared, I didn’t ‘just get sick’ I’ve been sick. For a long time. My sicknesses just have their names now. I went to doctors for 8 years. Trying to figure out what was wrong with me. I was called crazy and anxious and lazy amongst other things. I changed my entire lifestyle.”

If you’ve ever had to fight for a diagnosis or medical answer, you know exactly what they’re talking about.

Medical gaslighting is so rampant, and oftentimes it leads to people getting sicker, and sometimes even death. Once you throw in different intersections and racial/gender bias in the medical field, it gets worse.

A study published in Academic Emergency Medicine revealed that even though they shared the same symptoms as men, women who went to the emergency room for treatment for stomach pains endured 33% longer wait times. (Source: Northwell Health Interview)

I genuinely wonder how much quicker Halsey’s conditions would have had names if they were taken more seriously when they first started speaking up? What treatment plans would they already be on if doctors didn’t gaslight them?

Now that they know, they’re able to shift their life to accommodate their conditions while also preparing for their new North American tour that’s launching out of West Palm Beach in just a few days.

I’m ecstatic that Halsey is able to celebrate receiving their new diagnoses so they can create their medical go plan, but livid that it took eight years for them to receive the proper attention to get said diagnoses, and that’s with the money, notoriety, and privilege that comes with being a global music sensation. For the average person it could be so much worse, as those medical expenses add up.

Let Halsey’s story be a shining example as to why we need to take people seriously when they say something isn’t right. It’s hypocritical to say “listen to your bodies” just for you to ignore us when we do