The Importance of Sharing Our Stories During Epilepsy Awareness Month

I am so excited because November is Epilepsy Awareness Month. I love when unrecognized illnesses get their time to shine. I wish that awareness was raised more for illnesses like epilepsy. In October the NFL, many large companies, hospitals and even churches wear pink for breast cancer – why not wear purple for epilepsy, or blue and green for pseudotumor cerebri? And not just the illnesses I’m lucky enough to have, but all rare illnesses? The only way these diseases get cures is through research and research doesn’t happen if people don’t even know they exist.

Since this month is dedicated to epilepsy and I have firsthand experience with it, I want to talk about that. In July of 2009 at Cedar Point, I had my first “episode.” I passed out, and had to be attended to by paramedics. After an IV and some rest, they sent me home. My family and I were terrified because nothing like that had ever happened to me. I was embarrassed because waking up with rows of people staring at me and not knowing what happened was the worst feeling ever. My doctors at home called it a fainting spell and said I was fine.

Months went by and nothing else happened. Then it was January and my family and I had just gotten back from dinner when again I had an “episode.” This time it was way worse. When I woke up I was afraid and I didn’t know what had happened or where I was. I couldn’t speak or move my left side. I cried and it seemed like hours before I stopped crying.

The emergency room put us through hell. At first they thought I was faking, then they thought I was on drugs, then they thought I just wanted drugs from them. It was a horrific experience. Eight hours and a whole bunch of tests later, they sent me home with no answers. Experiences and episodes like these happened to me for years with no help or idea what was wrong with me or why this kept happening. I had to leave college and stop jobs. I saw 13 neurologists and pediatric specialists before I was diagnosed with epilepsy.

Many people with epilepsy go through similar situations when trying to figure out what is wrong with them. April 7th, 2014 was honestly one of the best days of my life. It is the day a neurologist diagnosed me. I was sad for a moment but relieved. It took months of research and observation on my part to learn my auras and triggers. I had to teach myself things I could and could not do and and learn how to recover after a seizure. The hardest thing about it was learning to tolerate the medication and monitoring the side effects. The trial and error phase of medication when it comes to epilepsy can be atrocious and scary. The medications can change everything. They can affect all aspects of your life.

Issues with medications aren’t the only thing I’ve had to learn to handle with epilepsy. Whenever I meet someone I have to decide whether or not to tell that person about my epilepsy. I have to cope with my mom having a panic attack every time there is a bump in the house, thinking it’s me hitting the floor. I have to endure the fear of waking up and not knowing where I am or soiling myself in front of strangers laughing. Not knowing if I should inform my new employer about my epilepsy, or tell my new friend. Losing hours of time, not knowing how I got where I am. The worst part is learning to let go of control. With epilepsy you have no control, not over how it happens, when it happens or where. That is what I still struggle with the most today.

After all these years and going through so much, I’ve learned to adjust, and with time I’ve learned to accept things. Epilepsy doesn’t have me; I have epilepsy. Unfortunately enough, it is a part of me and I will make the best out of it. Making the best out of epilepsy means sharing my story with anyone who wants to listen to hopefully help them. Participating in epilepsy events to raise financial support for the cause and doing anything I can to raise awareness so that maybe just one person will help someone they may know with epilepsy or raise awareness themselves. 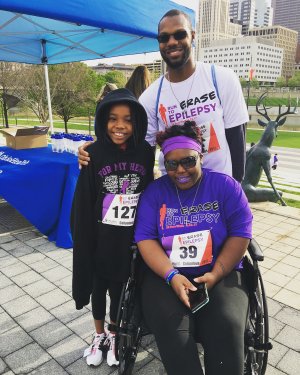 I implore all those with epilepsy to do the same: raise some money, make some noise and tell your epilepsy story. To those who support and care for someone with epilepsy, continue being amazing, unsung heroes to us all, and be sure to take time for yourself and raise awareness yourself by telling your story! Everyone else, donate and research what you can do to help someone with epilepsy. Happy Epilepsy Awareness Month!!

reading other peoples post on here really helped me through some hard times and I just hope something I say will help someone else too!!

essenceuniqueeasley
Want more of The Mighty?
You can find even more stories on our Home page. There, you’ll also find thoughts and questions by our community.
Take Me Home