Conversations with friends and co-workers these days often include the question, “How’s it going working from home?” My company sent everyone home in March and has said it will reassess the situation in January. Although the reason we were sent home is distressing and has caused heartache for so many people, my answer is this: Working from home is fantastic. It has been so beneficial for my health that I feel like a different person. I’ve gotten my life back.

I have fibromyalgia and chronic fatigue syndrome. The answer is complicated. Each little thing sounds irrelevant on its own, but the little things add up. The best analogy I can come up with is rationing food when you’re starving. Every bit of food you don’t eat now is food you can eat later.

As recently as six months ago, I was living a very different life. After returning home from the office, I often took a nap. Waking up an hour or more later, I would lie there and think of all the things I needed to do. If I cooked supper, I probably wouldn’t have energy to exercise. If I exercised, I wouldn’t have energy to run an errand. Sometimes I was too tired to shower. Most nights, I was bone-tired and on the couch by 7 or 8 o’clock. I had to muster up the energy to get up and go to bed.

Occasionally I’d meet a friend for coffee on a Saturday morning. That meant pretty much nothing else would get done that day. It meant I wouldn’t have enough energy to go grocery shopping or clean the house. I had groceries delivered more often pre-pandemic than I have during the pandemic.

In general, weekends were spent recovering from the workweek. And every Monday morning, I would restart the whole process, pushing past my limit each day until I crashed Friday night.

When I started working from home due to COVID-19, my life began to change.

I get 45 more minutes of sleep every morning. I spend five minutes getting ready in the morning instead of 15 or 20. I don’t have to pack my lunch and I don’t have to drive. Driving is one of my biggest energy vampires. There were many days, back when I worked at the office, I felt unsure if I had the energy to drive myself home. Speaking of lunch, I have access to my kitchen now, which means I’m not limited to meals that are either easy to pack or are microwave friendly. Eating better equals feeling better.

I work at a standing desk — at home, MacGyvered out of cardboard boxes and duct tape — due to chronic back pain that makes sitting painful. At home, I get to stand at my desk in comfortable sneakers instead of dress shoes. During conference calls and virtual meetings, I can participate from a more comfortable position like lying on the floor, which lessens my pain, requires less energy and makes it easier for me to concentrate. 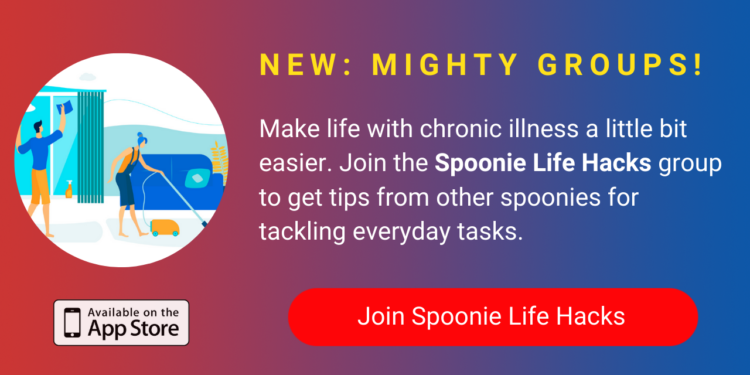 Thanks to fibromyalgia, I have a super sniffer and supersonic hearing (the audiologist actually said that!). Exposure to sounds, smells and lights overstimulate my brain and create fatigue. When people in the office use diffusers and air fresheners or wear scented lotion or perfume, I get headaches and stomachaches and my fatigue worsens. In the past, I often worked with my door shut and sometimes had to go home for the day because of smells. In my house, I have nearly total control over these stimuli.

The water dispenser, the bathroom and the lunchroom are closer to my desk at home, which means I don’t expend as much energy moving around during the day. Going back to my analogy, that’s more food to eat later.

Working from the office, my job used up around 75 percent of my daily energy. Now, it’s closer to 50 percent.

Breaks at the office were sometimes hard to fit in. When I could take a break, I would roll out my yoga mat and lie down on my office floor to stretch, exercise or nap. I worried about the perception of having my door closed. People who have time to take breaks are often perceived as not busy enough or not working hard enough.

I worried about someone walking in on me while I stretched my legs up in the air with my dress around my waist (this happened a few times). Others would knock on my door when it was closed, forcing me to scramble to my feet and put away my things. I would silence my laptop and cell phone, but my desk phone would inevitably ring. Interruptions and distractions were commonplace, which meant a break wasn’t really a break at all.

These issues don’t exist at home. Breaks at home are quality breaks that replenish my energy.

The most compelling statistic I can share to illustrate the difference working from home has made on my health is my weekly nap average. Before: 11 naps per week. Now: two.

I remember days at the office when I pleaded with the clock to show a time that meant I could lie down and close my eyes. I rarely feel that way now.

Having more energy means better concentration and focus. Another benefit: I can take sick hours instead of sick days. There have been a few days I wasn’t feeling well. I laid down for a short time and got back to work in an hour or two. Had the same thing occurred when I was working at the office, it likely would have resulted in a full or half day off work.

Last night after work, I went for an hour-long, fast-paced walk. I showered, made supper, cleaned up my dishes and emptied the dishwasher. I took my cat for a short walk. I swept the bathroom floor and folded the towels that were waiting in the dryer. I worked on my wall mural project in the basement and hauled in the large box containing my new desk that FedEx had dropped off earlier.

When I finally sat down for a break, I mentally reviewed everything I had done. And I smiled.

I'm an office supply enthusiast, a book addict and an amateur font critic. I wave at dogs and cats even though they can't wave back, and I eat a sugar-, wheat- and dairy-free diet. Doing my best to live a good life despite fibromyalgia, chronic fatigue syndrome and chronic back pain.

abless
Want more of The Mighty?
You can find even more stories on our Home page. There, you’ll also find thoughts and questions by our community.
Take Me Home