Since joining the rare disease and chronic illness “clubs” due to my multiple diagnoses – including a rare disease called fibrosing mediastinitis, which caused yet another rare disease called pulmonary arterial hypertension, superior vena cava syndrome and congestive heart failure, on top of my other health concerns with type 1 diabetes, endometriosis and degenerative disc disease – I have been surrounded by a lot of great people who can relate to what I go through! We often share stories about the “look” we get when explaining our illnesses to doctors and anyone in the medical field. And for any of you with chronic and rare illnesses, I know you will be able to relate!

Due to us being so few, chances are when I go to a new doctor, they have never heard of fibrosing mediastinitis. Their reactions are often priceless and, to be honest, sometimes this is what gets me through some of my appointments.

I get the “deer in the headlights” look, the “I don’t know what to say” look, the “confused but I’ll pretend like I know what that is” look, the “I’m sorry” look or the downright “what the heck did you just say” and “frightened” look. Well, at one of my appointments I was able to pull off almost all of those looks in one shot!

The other day I woke up with quite the allergy attack and sinus pressure. I continued to push through the day and tried allergy and sinus pills yet the sneezing, watery eyes and runny nose continued. The next morning I woke up with extremely – and I mean extremely – painful pressure in my left eye and on the left side of my head and nose. To the point where I was lying in bed cupping the left side of my face with my hand.

As much as I dreaded it, I was absolutely miserable and with my horrible immune system, I knew I shouldn’t wait too long to go to the doctor. So, I went to the walk-in clinic. Finally, after over half an hour of waiting, I got called back to a room and the fun began as the nurse reviewed my medical history. First off, I was very impressed that she pronounced fibrosing mediastinitis correctly. After going down the very long list of health problems she joked that other than that, I was pretty healthy.

Shortly after she left a doctor came in and explained she was a med student but assured me no worries because she’s had over 30 years of practice. I giggled to myself as she began reviewing my history, knowing no number of years could prepare her for what I was about to explain to her.

She started her exam by checking my vitals and then asked me to take off my heavy sweatshirt to listen to my heart, which I did. Hanging from the left pocket of my jeans was my insulin pump then on the right side was my heart monitor attached to my jeans, as well as electro pads peeking out from underneath my t-shirt. This led to several questions. 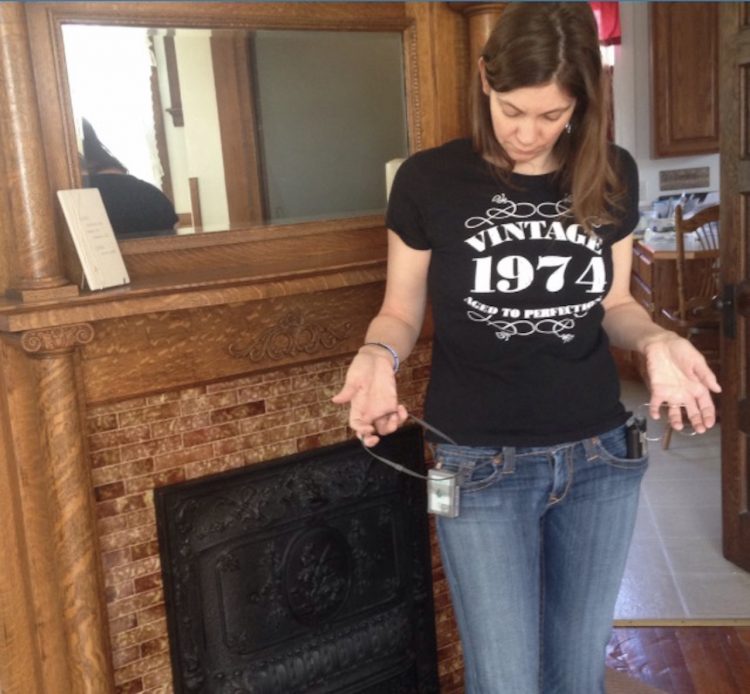 As she began listening to my heart and lungs, even more questions. Why do I have such an unusual heartbeat, why is my breathing so bad, why am I not getting full breaths, why am I not moving much air? She sat down in front of me waiting for my answers so I simply said my illness affects my heart and my breathing, especially when I am sick, hoping she would give me the “confused, but I’ll pretend like I know what that is” look. Nope, she asked me to explain what my disease was!

I went on to say that for some reason my body develops an abundance of scar tissue and that scar tissue crushes the organs, arteries and veins in my chest leading to all of my heart, lung and breathing issues. I told her how doctors originally gave me 10 years to live but then boasted how I had surpassed that deadline.

And there it was…the look – or I should say the looks! Her eyes got the “deer in headlights” look, she pulled her head back with the “frightened” look and her mouth opened so slightly in the “I don’t know what to say” look, but then her face softened and she just stared at me with the “I’m sorry” look. She followed by saying she would go get the doctor. Yep, I’m guessing she had never seen anything like that in her 30 years of practice!

She and the other doctor came in and again, the doctor listened to my heart, checked my vitals and then asked what my blood pressure was. The first doctor reported it was good then left the room. As I was discussing my situation with this doctor I did share I had right pulmonary arterial hypertension. She quickly jumped in stating I probably had them check my blood pressure on the left arm. We both laughed knowing my blood pressure is always lower on the left and my right arm would show high blood pressure due to the hypertension on that side. I was impressed she picked up on that right away. She said she was sorry I had so many extremely challenging illnesses – especially for being so young.

I was diagnosed with acute sinusitis and bronchial issues, a.k.a…sinus infection. Due to the fact I don’t handle medications well, I let her know z-packs worked best for me; however, she said she usually doesn’t prescribe that for sinuses and got out her list.

The first three meds at the top of her list were out due to me being allergic to them. A couple also didn’t work due to me being on Plavix. She then said the z-pack is eighth on the list so she began naming a couple other ones. I pointed out that one of the meds she mentioned made me extremely sick and another would affect my diabetes too much, so yep, I was ordered a z-pack. We always know best what works for us!

As we were figuring out medications my heart monitor was beeping. The doctor asked me what all that beeping meant and I replied, “Nothing, it beeps all the time” and again, I got the “I don’t know what to say,” frightened look.

With all of that being said, I am so grateful for every doctor and nurse I have come across, answers or not because they eventually led me to my wonderful team of doctors I have today…doctors that still give me a “look” here or there, but also doctors that ask me more questions and simply talk to me as a person to get more clarification and knowledge on the illness that is slowly taking my life away. And even though we know how serious my condition is, and the challenges I am up against, my doctors are right beside me searching to find something, anything to help me…and they are providing hope and encouragement.

You have to make the most out of life and recognizing or naming the “look” is a silly little way to make my dreaded appointments a little more entertaining in the midst of my lousy situation!

I was diagnosed with a rare disease and given no more than ten years to live and that was 15 years ago. Faith and family give me the motivation to fight for the life doctors said I would never have. I share my most recent challenges and triumphs on my blog and my whole story is published in my book titled &#8220;I&#8217;ll Take My Disease Rare Please: My journey with fibrosing mediastinitis&#8221;

rebecca-lalk
Want more of The Mighty?
You can find even more stories on our Home page. There, you’ll also find thoughts and questions by our community.
Take Me Home