I Can't 'Just Vomit:' The Dilemma of GERD and Emetophobia

This is something I have had my entire life. When I’m unwell or sick, I’ll do anything in my power to avoid vomiting. I will pace around the house, tilt my head and hold my breath. The only time I vomit is when I’ve gone beyond having a choice and I have zero control over my body. Sometimes the only time I let go is in the midst of a panic attack itself.

If someone else is sick near me, I will roll away screaming. I’ll do everything in my power to get away from them. If a partner is unwell I feel like the crappiest partner in the world. I can’t even hold their hair back or offer them comforting words. I hide in a different room with headphones on, rocking and telling myself, “I’m fine, I’m fine, I’m fine.” 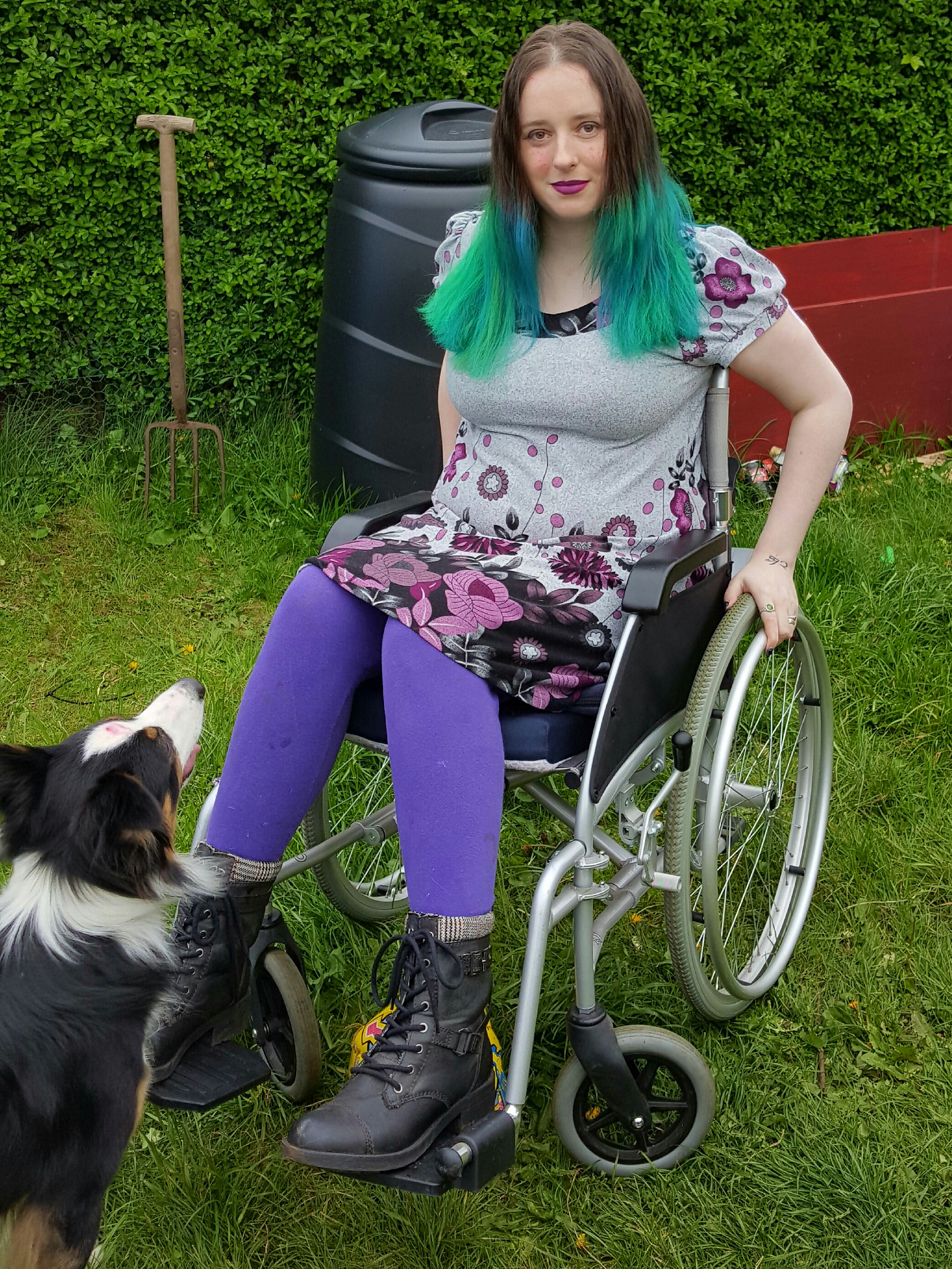 I’ve had this for as long as I remember, and I think I’ve managed it quite well. If there is vomit on the pavement I just hold my breath and roll on past. And with regards to people actually being sick near me… I think I’ve come a long way. I only really have full-blown panic attacks when I am sick or when it’s on me. I am very careful with my food, and I only really eat home-cooked food that’s fresh or fresh food that’s been frozen in my house, so I rarely get sick anymore. I have some stomach pain, and several years ago I was diagnosed with chronic gastritis. But I’m as careful as I can be, so I’m rarely sick.

Until a year ago that is.

I don’t know what happened or changed, but a year ago I was suddenly struck down by an unbelievable pain. Now I’m in pain 24/7. I’m on multiple medications and painkillers, but this pain…this pain blasted through everything. It felt like my entire upper body had been dipped in fire. I had no idea where it came from and I didn’t know what it meant. It was new and definitely wrong.

The thing is, it didn’t feel like it came from my stomach. It didn’t feel like I was going to vomit. It just hurt. It hurt so much I was at times on the floor screaming and crying and it kept getting worse and worse. The pain climbs inside as the acid creeps up from your stomach; it lights your chest on fire from the inside. A doctor has said it’s an intractable pain. I have felt many different forms of pain over the years; pain from appendicitis, from my fractured sacrum, from the many dislocations and subluxed joints. From trigeminal neuralgia to complex migraines. This was on a different level, a pain closer in magnitude to trigeminal neuralgia, and one that I’ve never felt before.

Though I did manage to find positions that didn’t hurt as much, they all still hurt. I couldn’t even not move for about 30 seconds. I was shaking, I was pale. My skin was starting to take on a gray-ish caste. My skin felt like ice but I was sweating all over. After about three hours of me screaming in pain, my partner called an ambulance.

Now I hate calling ambulances. My pain is chronic and long-term, and I have fibromyalgia, migraines, etc., so when I end up in the emergency room I’m met with disbelief. I’m seen as an addict, a liar; thus the emergency room to me is a place of fear. Yes, I’ve had a few instances where doctors have been amazing to me in the ER, but they are rare, so although as I was in my third hour of screaming in pain (I do wonder what the neighbors think…), I didn’t want to call those three dreaded numbers.

But I was exhausted, I was drained, so my partner called them. I was in so much pain and so exhausted that I couldn’t summon the effort to scream or argue not to call anymore. I could hardly talk to the paramedics when they arrived. I couldn’t remember how long they’d been there or what they were talking about with my partner, but they asked for the sink bucket. I just remember when it thumped down in front of me. My brain reeled. My brain was skidding into a panic attack but the pain kept kicking me back and my body was racked with pain and pure exhaustion.

They told me to “just vomit.”

I think I started laughing. Close to hysterical laughter really. Just vomit? I couldn’t explain because the pain kept hitting and hitting. I think it was about 20 or 30 minutes later, and they were getting annoyed that I hadn’t vomited yet. I did in the end. My body finally was forcing so much acid up my esophagus that I was getting that feeling…the feeling under my chin that preludes vomiting. I tried to hold it back. I panicked and started shaking my head, desperately trying to keep it down…but this was worse than normally being ill, and it felt like my entire body was in convulsions trying to stop something that couldn’t be stopped. When I’d finished, the paramedics patted me on the back, said “good girl,” then left. I was sick eight more times that night, and I fought against the eighth as hard as the first.

It took a while to discover what was wrong, to be diagnosed. When an attack came on I would pace and pace, forcing myself through hours of intractable agony just to avoid vomiting, again and again and again. Eventually I got diagnosed with gastroesophageal reflux disease (GERD), and I discovered my biggest trigger was milk, or to be more precise, lactose. I’ve been a milk drinker my entire life. I love milk, cheese, cheesecake…and now they were putting me through hell. It wasn’t hard to give up something I had loved for so many years. With the GERD attacks as a warning, it was super easy! I’m on medication now; lansoprazole and ranitidine are helping. I have a few minor attacks that the medication stops in its tracks.

Now I know if I go to the bathroom and vomit, the attack will be over. The pain will go away. But I can’t. It isn’t a case of won’t. If it was a case of “I won’t,” I wouldn’t wander the house until I collapse on the floor screaming in agony. It’s been a year, and before I knew of the milk trigger, I had so, so many attacks. If it was a simple fear or reluctance, a half hour or so of intractable agony would be enough to override it and force me to vomit. But I was having about five attacks a week at first, with each attack lasting being four to six hours of horrible pain where I did everything in my power to not do the simple thing that would end that pain. I was shaking all the time, so weak I couldn’t walk and unable to eat or drink anything. I was a wreck, telling myself, “I’ll just be sick next time, I can’t do this to myself again.” But another attack would come, and I’d do everything in my power to not do that simple thing.

I’ve been free of the full attacks since 2017 started and I’ve controlled the smaller acid attacks with my medication. I’m not silly enough to think that I won’t have another attack. I’m also not silly enough to think I will be able to “just vomit” next time either. All I can do is control my diet, be careful about what I eat and try to stave off the attacks and take my medication.

So, if anyone tells you that emetophobia is normal/not real, that no one likes being sick and no one likes to see it, ergo it’s not a “real” phobia…ask them if they would force themselves to endure hours of constant high levels of pain – pain they can easily stop at any second – just by vomiting. Would they force themselves to endure this for hours and hours because they don’t like being sick? Considering most people I’ve met have admitted to making themselves vomit only to avoid a hangover, I doubt they would. I’d love to “just throw up” at the start of an attack.

I’m 33, disabled, somewhat house bound as of late as my pain has taken over a bit. I love crafting, virtually anything I can still craft that doesn’t hurt my hands I still do. Embroidery, loom knitting and loom weaving.. Colouring is another thing I love very much. Despite being unable to sit at a PC anymore, I still love to write. I can’t remain in a seated position for long as my sacrum starts hurting to an unbearable level. But I still want to write, so I use my phone. It’s not the best means for writing long peices on disability but regardless I still get a few out, luckily my partner and the Editors catch my odd auto correct typo’s!

m-mac-c
Want more of The Mighty?
You can find even more stories on our Home page. There, you’ll also find thoughts and questions by our community.
Take Me Home