Walt Disney once said, “I only hope that we don’t lose sight of one thing: that it was all started by a mouse” when talking about how he built up the Disney company to become a household name. As an avid Disney fan and Disney goer, this quote always seemed to resonate within me. Maybe one day I would own my own business, or start my own charity. I always had ideas, but never acted upon them. Now 19 years old, I finally acted upon one of my greatest ideas, the Gastroparesis Pie Face Challenge.

In 2009, at the age of 10, I was diagnosed with gastroparesis. As myself and many other people who have gastroparesis know, the most common reply to that question is, “Gastro-what?” Gastroparesis is a rare chronic condition that causes one’s stomach muscles to not function properly. This means affects your ability to eat, digest, or absorb any food or nutrients. It is basically like having a paralyzed stomach. It causes symptoms such as constant nausea, frequent vomiting, bloating, severe weight loss, and malnutrition. Can you imagine living with this condition? For years I have lived with constant nausea and vomited 10 to 15 times a day. It is like living with the worst stomach bug imaginable every single day of the year. Did I also mention that there is currently no known cure and few resources for patients with gastroparesis?

Gastroparesis affects every aspect of life. You are limited socially, as you never feel up to going out with friends or family because of your symptoms. When you go out, you are always scouring the place  for the closest bathroom. You may feel isolated because no one understands what you’re going through as you don’t “look sick” to some. You might get tired of watching people enjoy food while you can only manage a few bites of something before feeling full or nauseous. You may not attend school or work regularly because the symptoms are just too much to handle. I think you get the picture.

The idea of starting this challenge did not come to me until this past summer. One day in July, I was scrolling through my newsfeed and I stumbled upon a tweet that said a senator from Wisconsin wrote a letter to Congress asking that August be officially recognized as Gastroparesis Awareness Month. I told my mom about the tweet and she encouraged me to do something for Gastroparesis Awareness Month. Taking her advice, I started to brainstorm some ideas of how I could spread awareness for gastroparesis. I wanted to do something big. Something that was both fun for all and symbolic at the same time but, I wasn’t quite sure of what to do.

Living just a few cities away from the birthplace of the ALS Ice Bucket Challenge that became a viral sensation in 2014 got me thinking of the idea of starting my own challenge for gastroparesis. I began to look into how the challenge had become such a success. It was not only easy and fun to do, but it also had an incentive for taking the challenge. I then remembered back to the previous year’s Christmas and how I saw daily videos about people playing Hasbro’s board game Pie Face. By combining the success of the ALS Ice Bucket Challenge and Hasbro’s board game Pie Face, the Gastroparesis Pie Face Challenge was born!

The rules of the challenge pretty much followed those of the ALS Ice Bucket Challenge but with an obvious twist. You record yourself smashing a pie tin (paper plate/bowl works too) full of whipped cream in your face, challenge others, and donate at least $1 to G-PACT, a nonprofit organization that provides resources for patients and conducts research on gastroparesis. I figured it would be not only fun and enjoyable to do, but it would also be symbolic. It shows people who never heard about gastroparesis that people who have it cannot eat, as there is no eating of the whipped cream in the challenge. 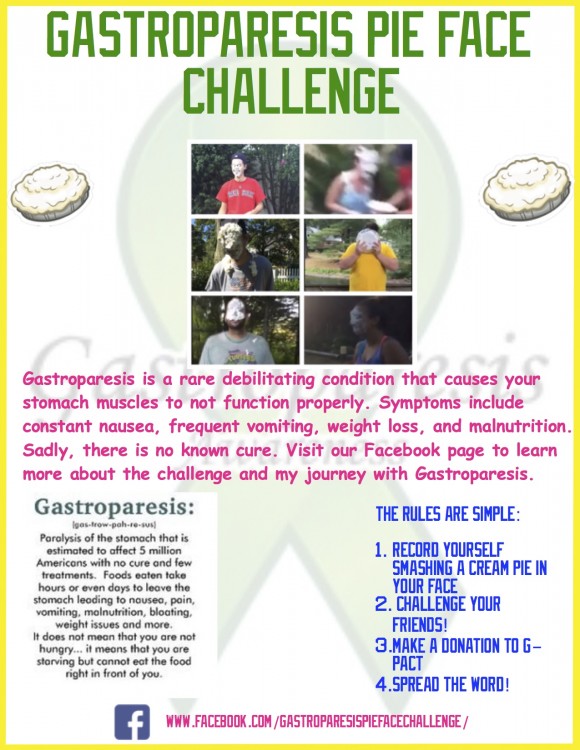 I started this challenge in order to not only raise awareness but to help find a cure. It is time the world knew about gastroparesis and what we go through on a daily basis. I hope people don’t lose sight that this challenge was started by a kid, his dream, and a can of whipped cream. Why not make 2017 the year of gastroparesis?

Andrew Belliveau
•
Follow
andrew-belliveau
Want more of The Mighty?
You can find even more stories on our Home page. There, you’ll also find thoughts and questions by our community.
Take Me Home