Most days I welcome my happy little Facebook memories.

This week, leading up to the anniversary of my father’s passing, it’s a love-hate relationship. For those of you who do not know, my dad passed away after a long battle with stage IV base of the tongue cancer. The last four months of his life, he was on hospice, and I was in total denial. I would walk around telling people hospice was to help him “get stronger.” He was unable to eat orally for the last four years of his life; all of his nutrition came from a peg tube inserted in his stomach. Let me repeat that, he could not eat or drink orally for four years. He lived on Ensure and Gatorade all through a peg tube. He suffered from extensive nerve damage after his aggressive radiation treatments. He would shake and sometimes scream in pain.

People often tell me to remember the good times, but if I forget how much he suffered, then he suffered in vain and I can’t let that happen. I spoke to my father daily, visited weekly and with each visit, another piece of him was ripped away. On my car rides home, I would punch my steering wheel and scream at God.

Why was I given front row seats to watch my beloved father suffer?

Five years later, and I still do not have an answer for that. The days leading up to my father’s death were gut-wrenching and emotional. I had a very difficult time accepting he was in fact dying. In my mind, he was supposed to get better and eat again. See, I’m Italian and like many Italians, we love our food. When my father lost his ability to eat, a piece of me died. I became angry. Quite honestly, I am still angry. There is truth in the saying, “You don’t know what you’ve got until it’s gone.” People spend their lives chasing fad diets, depriving themselves of various foods for various reasons and my father was in agony and yearned to eat something — anything.

I didn’t realize how much I still carried this pain with me until I clicked on my Facebook memories today.

Those little Facebook memories always seem so friendly and inviting.

Memories like sitting in the sunshine watching the ocean waves ride up to your toes.

This week is quite the opposite.

What Facebook should have said is, “You have a painful nightmare, click here if you want to throw up.”

Even now, I scroll through those memories and my heart is shattered into a million pieces.

With each post leading up to the anniversary of my father’s passing, my heart is shattered over and over. How quickly we can slip back into a memory and have it feel so real and raw … as if no time has passed.

Today, I clicked on my Facebook memories and once again, my heart shattered all over, my eyes filled with tears and the gut-wrenching pain all returned. Instantly, I was brought back to the moment I was sitting next to my father’s hospital bed, hysterically crying, begging him not to die. Making childish bargains with him to please not leave me. I realize how incredibly silly and selfish that sounds, but death can do that to us. We can get wonky. We may say silly stuff. We may get angry. My father’s body was ready to leave this life, but I wasn’t ready to let him go. I needed him, I still do.

Death is final and often terrifying for the people left behind. It seems like our parents teach us everything in life, but how to survive without them.

Five years ago, I cried until I had no more tears left, and then I cried some more.

Five years ago, I knew my father was dying in the days to come.

Five years later, I’m thankful for the time God gave us with my father, despite how painful some of those memories are.

I feel incredibly thankful and blessed God gave us these last moments with my father. My dad already knew how much we adored him, but I was able to tell him one last time. On the day of my father’s death, I held the hand of the man who guided me throughout my entire life as he took his last breath. My father was my best friend and my deepest inspiration for strength. There’s something profound about holding someone’s hand as they leave this life. Even more if that person is the center of your entire universe.

January 17th will be five years since my dad left, but I can still remember holding his hand as he took his last breath and my assurances to him it was OK to let go. That despite my childish pleas just days before, I would in fact be fine and to not worry about me. 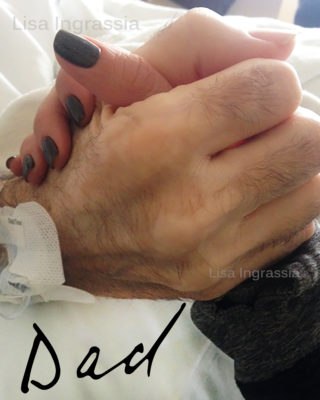 Five years later, and I have created my new “normal” without him.

There are moments I still go to call him for his fatherly advice, and those waves of grief come rushing in. But I consider myself blessed to have had a father who had such an impact on my life that even now he’s still missed.

Some are gut-wrenching and shatter my heart into a million pieces, but they remind me of what an honor it is to be the daughter of a man who fought so hard to live for his family. And as long as I have breath in me, I will be my father’s living, breathing legacy. I will tell his story and remind everyone of how hard he fought to be a part of this beautiful life.

These Facebook memories are a love-hate relationship, but they also remind me of what a blessing this life is.

Lisa is passionate about discussing the difficult path a caregiver walks. She enjoys spending time with her family and traveling. Lisa is a freelance writer who writes regularly for Beliefnet, Her View From Home, The National Foundation of Swallowing Disorders and is a Huffington Post blogger. Fun fact: She’s obsessed with her Boston terrier Diesel and loves the color blue.

lisa-ingrassia
Want more of The Mighty?
You can find even more stories on our Home page. There, you’ll also find thoughts and questions by our community.
Take Me Home