Grief in the Frozen Novelty Aisle

For much of my relationship with my late husband, Greg, we lived in different states. I was in California finishing up college and grad school, and he was in Colorado furthering his software/tech industry career. We did our best to see each other monthly and always during the holidays. He would come out for Thanksgiving, or on the years he was with his family, I would head out shortly thereafter. If we weren’t together for Christmas, we were always together from December 26 through the New Year. The way we often rang in the start of the holiday season was with my favorite gingerbread ice cream sandwiches. They came out every Thanksgiving to all the chain grocery stores and stayed through the end of January. Oftentimes, I stocked up so my stash would last at least through Valentine’s Day. 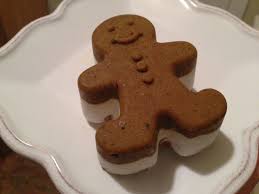 I don’t remember who made them, and they were probably mostly made of things we can’t pronounce, but they were soft gingerbread cookies sandwiched together with vanilla ice cream. And they were damn delicious. I ate them during finals; I ate them writing papers; I ate them whenever I wanted to feel like I was eating Christmas.

When the first holiday season rolled around after Greg died by suicide from depression, I wanted nothing to do with it. I was staying with my parents, and my mom is like me. She goes all out for Christmas (I wonder where I got it from). I dreaded the decorations, the tree, the lights, the joy. I had no Fa La La La La spirit in me. I looked more like the Grinch or Scrooge, and I would have happily moved into a dark cave and hibernated until January 15 if it was an option. So, come the first of December, when my mom started to get rolling on the house transformation, I boogied to the local Ralph’s to see if I could eat my feelings. I knew that a gingerbread man ice cream sandwich (or six or 12 or the entire stock) would help me regulate the knots in my stomach.

When I got to the frozen novelty aisle where they had been stocked for as long as I could remember, and I saw none, I knew there had to be a mistake. Perhaps they were being spotlighted in an end-of-aisle display. No dice. I went back to the frozen section and saw a clerk stocking shelves. I asked her where the gingerbread men were, and she had no idea what I was talking about. Wondering how she had ever made it this far in life and the frozen section without knowing about them, I asked if she could ask the store manager. She came back and informed me that the store manager said they weren’t getting any. This simply could not be true, so I demanded that the store manager come to the aisle so I could show him where they had been displayed every end of November — end of January since I could remember, and I asked why they were not there.The manager then told me what was the absolute last thing I needed to hear. He told me that they weren’t making the gingerbread ice cream treats anymore, and they would not be getting any. Ever.

And, with that, I felt the wind knocked out of me. I was freezing — more freezing than you should be after standing in the frozen foods section for 10 minutes. Then, out of the depth of my being, it started. The waterworks. The sobbing. The uncontrolled babble of someone in grief. I dropped to my knees while the clerk and manager just looked at each other, and then the manager pulled out his walkie talkie.

Then, other customers were there. Then a security guard. All of this at the grocery store in my hometown where I had been shopping with my mom since pretty much birth. After what seemed like an hour of me blathering on about gingerbread men, the manager and security guard asked if I thought I might be able to walk outside. I said no. So, they asked if they could call anyone, and I gave them my parents’ home number. A few minutes later, my dear father came in, looking concerned and sad, and sat down beside me, explaining to the lookie loos and the store personnel that I had suffered a pretty significant loss and the holidays were going to be hard and if they could all just give me a minute, we would be on our way.

It doesn’t take much to know this wasn’t really about gingerbread men ice cream sandwiches (but hell if I don’t miss them every year). It was about love and loss and the finality that comes with knowing the life you had isn’t the life you have any more. It was grief. It was having to look at the past — the good, the bad, and the ugly, and knowing I had to deal with all of it, if I wanted any chance at any sort of future.

Since that lovely day at Ralph’s (that I am surprised did not make it into the daily crime/goings-on log of the local paper in my hometown), I have managed to still enjoy gingerbread men ice cream sandwiches, just in a different way. I have baked my own gingerbread men and slathered some vanilla bean ice cream in between. I have taken the store-bought gingerbread cookies and done the same thing. And, they taste pretty darn good. Of course, it’s not the same as the original, but I have learned it doesn’t have to be. It’s different, but in a good way. The memory of the old treat remains, but it isn’t painful anymore. It doesn’t render me a sobbing mess in the middle of a grocery store with security on my heels.

It’s been the same with my life. I’ve had to make adjustments in the years since Greg has been gone. I had to find a new path. It doesn’t mean I don’t remember Greg. It doesn’t mean I don’t miss him. The difference between then and now is that I can look back now and not be consumed with the gut-wrenching sadness I had for so long. I have let love in again — and it’s made me whole.

In looking for some new gingerbread men ice cream sandwiches, I have taken some turns that have led me to the wonderful life I have now, with love and laughter and a husband who prefers brownies over gingerbread, and little boys who love gingerbread cookies just as much as their mama. And, when one of my sons cries when he realizes he just bit off and ate the head of his beloved gingerbread pal, I can hug him and kiss him and giggle at the power of DNA.

I’m a wife, mom, sister, daughter, aunt and friend who became a Survivor of Suicide Loss in 2002. I write, speak and do all I can to remove the stigma associated with discussing our mental health.

katelyonosher
Want more of The Mighty?
You can find even more stories on our Home page. There, you’ll also find thoughts and questions by our community.
Take Me Home