When I Bonded With a Stranger Over Having Thyroid Disease

In July last year, I completed the 5k Color Run course, raising money for Thyroid UK, a charity that campaigns for and provides information and support to those with thyroid disease and related disorders. I wanted to help them in their mission to provide information and resources to promote effective diagnosis and appropriate treatment for people with thyroid disorders. As someone with hypothyroidism, it was really important to me. 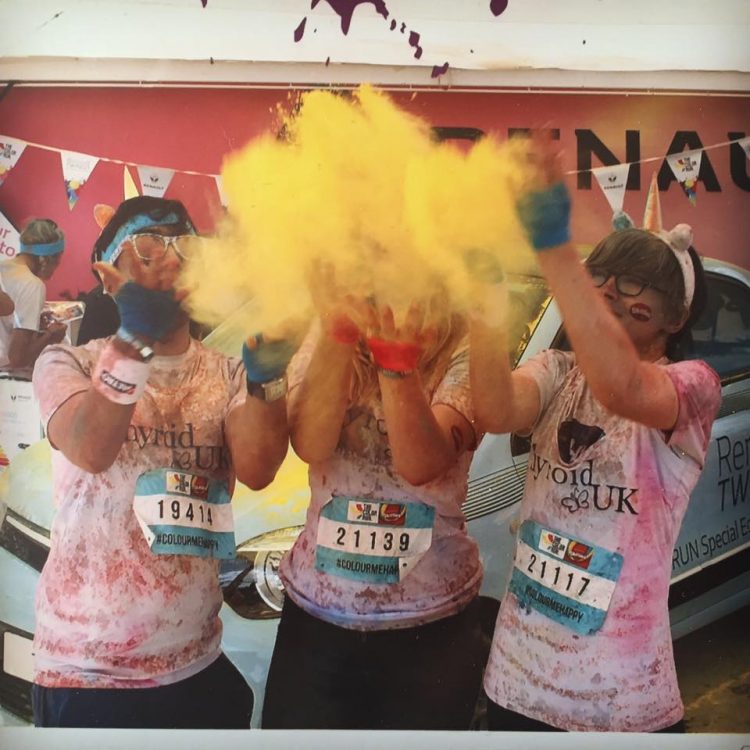 The 5k went well and at a pub in the evening, while having a drink to celebrate my achievement (having hypothyroidism made the course difficult to complete), I visited the toilet. After coming out of the cubicle and washing my hands in the sink, I commented on the pair of amazing shoes the woman standing next to me was wearing. They were mega high and bright pink and sparkly. She explained that she was here for a wedding and asked what I was here for. I replied that I had done the The Color Run that day, going on to explain what it was.

She asked if it was for a charity and I explained that regular entry isn’t, it’s just a 5k course, but there’s nothing stopping you from doing it for a charity, which is what I did. So she asked which charity I did it for, to which I replied “Thyroid UK,” waiting for her blank expression. Most people don’t even know what a thyroid gland is, so getting a blank or confused look back isn’t unusual.

She replied, “You’re kidding?!” and pointed to a scar on her neck. She had hyperthyroidism (overactive thyroid disease – I’m underactive) and was having real trouble getting it properly medicated, so she was losing hair and struggling to put on any weight. She had been having a really distressing time with it and spilled her guts to me.

We had a good chat about it all (the trials and tribulations of thyroid disease) and she said it gave her goosebumps having met me that day. She couldn’t believe it.

She hadn’t spoken to anyone else about having hyperthyroidism before. Ever. She had always kept her diagnosis of this disease to herself because she felt that no one would understand. Not even anyone she personally knew – yet she felt connected to this stranger she’d just met because they also lived with a thyroid problem. She was shocked to discover another patient.

But the thing is, thyroid disease is extremely common.

So many people have it and don’t speak to others for fear of being ridiculed or misunderstood.