Maybe I’m getting a little carried away with my metaphors and doodling, but I’ve come up with a little spin-off of Splat, the system I created to explain the severity of my symptoms.

I’m calling this system “Swall,” and it’s for people like me with irritable bowel syndrome (IBS) or other digestive diseases such as Crohn’s disease or ulcerative colitis. I’ve had IBS with varying severity and presentation for two decades, and my least favorite thing — even worse than the inconvenience and embarrassment of those urgent bathroom moments — is the bloating. It feels awful, can often hurt and even makes my back hurt. It’s impossible to dress around it in anything other than a giant hoodie.

And then there’s showing a poor sap I might be kind of dating (hey, it could happen) and saying, “See! Look how huge my belly is all of a sudden!” And he doesn’t realize that, “You look fine,” and, “I don’t see any difference,” are the absolute wrong things to say. I mean, for once my “invisible illness” is actually visible and I want validation, empathy and puppies!

For years, the best way I could describe this evil bloat is to say it feels like I swallowed a beach ball and someone blew it up inside me. People have gotten it well enough, I think. My closest pals understand when I say, “I can’t eat that. It’ll make me beach-ball.” Now, in the spirit of Splat, I’ve expanded my beach ball analogy into Swall: 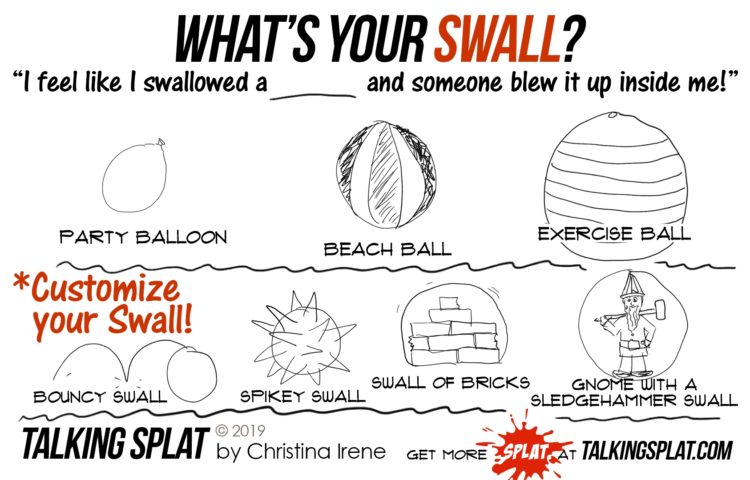 Author/speaker/comedian with osteoarthritis, fibromyalgia, CFS, IBS. I made TalkingSplat.com to help people like me live better lives, and people who aren't like me to understand us.

christinairene
Want more of The Mighty?
You can find even more stories on our Home page. There, you’ll also find thoughts and questions by our community.
Take Me Home