Whenever I need to be reminded that there is still good in this wild and senseless world, I simply think of my mom. As children, we put our mothers on these superhero pedestals. They can do no wrong. They kiss our boo-boos, wipe our noses and tuck us in at night. For a time our world revolves around them – and rightly so – our mothers have known and loved us since before the rest of the world ever even knew our names or saw our faces.

They continue to love and support us even as we grow older and less dependent and often less deserving. And when we hit those teenage years, wrought with conflict as we assert our independence through rebellion, they still never waiver in their devotion to loving us when we least deserve it. If we are lucky, we finally come full circle once again as adults, when we have the privilege of getting to know our mothers on a whole new level – as actual human beings(!) and as friends. Though, even with experience and time, the task of mothering often seems to become more difficult, rather than easier, because as much as they still want to protect us, unfortunately, grown-up fears aren’t solved by a bedtime ritual, and boo-boos can’t be fixed with a mortal kiss.

My mom is my biggest advocate, my trusted adviser and my best friend. And when my body could no longer fight the kidney disease savagely attacking my body, my mom once again donned her superhero cape when she offered a piece of her own body to save mine.

When three months of aggressive treatments and intense therapy had not generated a return in kidney function, it was time to face reality and consider Plan B: a kidney transplant. I was fortunate to have several family members who agreed to be tested, and we weighed the various options and considerations for each volunteer before anyone was even medically tested or qualified. My mom and three sisters all had compatible blood types, and for each of them we considered their long term health, plans for a family, age and lifestyle. Because the science of organ transplantation is relatively new, the expected longevity of any donated organ is uncertain, and my young age meant it was possible that I may need a second transplant down the line. Ultimately it was decided that my mom would go forward with testing and my sisters would be our “back-up” plan. I suppose you could say I have a small stockpile of potential donors if the need arises in the future. 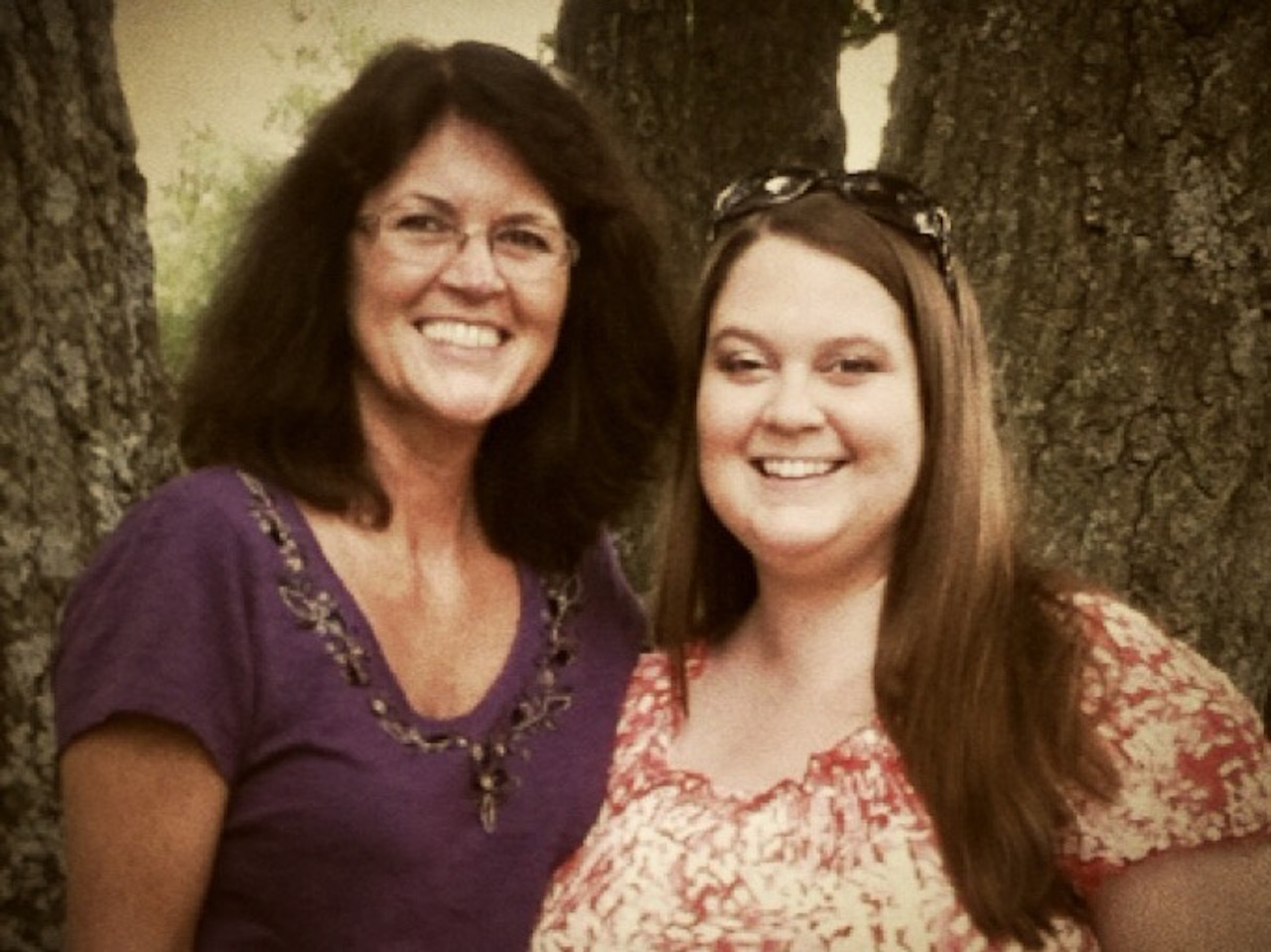 Years later, I tried to recall just how that conversation had gone and how my mom had won that particular lottery – I could remember all the reasons it made sense for her to be my donor, but I couldn’t remember the words said. I had envisioned a dramatic scene where my mom tearfully declared her love for her first born and proclaimed that nothing would stop her from sacrificing whatever it took to save her eldest daughter. (As if the situation wasn’t dramatic enough, but too many dialysis sessions watching Lifetime movies will do this to you.)

When I asked my mom about that life-changing conversation her answer was drastically different and actually very simple. She said, “There was no conversation; I just knew I’d do it. From the moment you were admitted to the hospital I knew that if it came down to a transplant, I was going to do this.”

I realized there had been no need for the tearful scene I’d imagined because in my mom’s eyes, it wasn’t even a question, wasn’t up for debate, end of story. To me this made her gift even more precious – it was more real, so matter-of-fact, and just like my mom. As a nurse, she has dedicated her life to helping other people, but this wasn’t about doing the “right” thing. She just knew, without a doubt, that if she could fix my boo-boo and give me life again, she would. It’s as simple as that.

Six months later we had both passed all our testing and my body was rid of the anti-GBM disease that had put the whole ordeal into motion less than a year prior. I don’t think I slept at all the night before our surgery was to take place. I just kept wondering if my mom was scared, too. I was anxious, but I had been through the medical ringer in the past nine months so I was more nervous for my mom’s surgery than mine.

After we checked in, we all sat in a waiting room for what seemed like both an impossibly long and short amount of time. Again, I’m sure the conversations we had that morning must have been awfully important, and yet, I don’t recall a single word. Finally we were taken back to the pre-op area, one large room divided by curtains and beds and machines. My mom and I each changed into our hospital gowns and climbed into our neighboring beds, and the nurses began starting IVs and hooking us up to various equipment. We were given ugly cafeteria-lady-surgical caps for our hair and white old lady circulation hose for our legs during the procedure. (Vanity be damned! I have to survive this, I refuse to let this image of me be the last my friends and family see…) Mom and I looked at each other and giggled, but part of me just really wanted to cry. How is it possible to feel so many different things in such a short amount of time?

They came to take my mom first. As they wheeled her away, tears ran down my face, despite my best efforts to put on a brave face. I called out “I love you,” and then she was gone. The enormity of what we were doing finally settled in and suddenly I couldn’t stop crying. Through the sniffles and sobs, in a voice that was too small to be my own, I said, “I just don’t want anything to happen to my mom… I need her.” What I did not say, and would not dare say aloud, was that if anything happened to her, I’d never forgive myself.

Attempting not to panic and fighting an anxiety attack, I asked the nurses about a sedative. They obliged, and one minute I was asking when it would kick in and the next minute… well, I didn’t have to ask. Almost immediately I was flying and I realized they were wheeling me out of the room. I waved to the rest of my family and flashed what I imagined (hoped) was a brave smile, but was probably more of a loopy, drug-induced attempt at a grin than anything, and then they, too, were gone. I fought the sedative all the way down the corridors of the hospital and into the surgical room as they started hooking me up to more machines before I finally gave up the fight and everything went black.

When I opened my eyes next, a blurry nurse appeared in my line of sight and told me the surgery was complete and had gone well. I drifted in and out of sleep for some time while in the recovery room, waking occasionally to ask the nurses about my mom when they came to check on me. I learned she was in recovery as well but had not woke up yet. Later as I was being wheeled to my room from the post-op room I opened my eyes to find we had stopped just outside of the waiting room where my entire family was looking on, and I smiled just to see their faces. People came and went that afternoon as I rested. When I was awake I begged for water, only to get ice chips, and asked about my mom, only to be told she was in her room but in pain.

That evening the nurses helped me sit up, holding a pillow to my incision, and they announced that my mom was coming to visit. I sat there anxiously waiting; I was thrilled with the excitement of being able to hug her and thank her. I wondered if I had gotten the wrong impression about the amount of pain she was in – after all she was walking over to my room and I could barely stand. But as soon as I saw her I realized it was pure maternal instinct (the kind that tends to instill superhero strength into mere mortals) that had propelled her to my room. She slowly shuffled in gripping a four-point walker with a nurse by her side. I looked at her face and I could see pain written all over it. I suddenly realized exactly why they were keeping us in separate rooms as my earlier enthusiasm quickly faded. She was pale and stiff and I had a sudden glimpse of her in 30 years, and my eyes welled up with tears again.

She assured me her pain was normal and that she’d be fine. I knew even if that wasn’t true, she would lie for my benefit no matter what it cost her. She only stayed for a moment, long enough to see how I was doing. Then she gave me an awkward hug, both of us still stiff and sore, and waited until I had laid back down before turning to leave. It was her turn for a brave smile as she whispered good night and told me to get some rest. As she was helped back to her room, exhausted from the excursion, I thought just maybe there were some forms of adult angst that could be calmed by a good-night ritual after all.

Coming up on 10 years later (March 2017), I remain humbled by my mother’s grace, compassion and courage. I’m honored to carry a piece of her (literally and figuratively) wherever I go. My mom gave me so much than the gift of life (twice); she has given me the equally priceless gift of renewed faith in the human race.

After surviving two extremely rare auto-immune illnesses in a seven-year time span, I decided to share my experiences in order to help others going through similarly difficult medical diagnoses. I was featured in a Discovery Life documentary in April 2015 and I currently write a blog and host a website (www.whenpigstakeflight.com) and social media platforms dedicated to issues relating to chronic illness, kidney disease, encephalitis, autoimmune diseases, chronic pain, anti-GBM, anti-NMDA and organ donation. My blog is featured as a resource on both the Anti-NMDA Receptor Encephalitis Foundation and the global Encephalitis Society websites. In my day job, I work as a corporate marketing and communications specialist for a global engineering firm. I enjoy arts and crafts and home improvement projects and spending time with my dog, Dolce.

erica-snyder
Want more of The Mighty?
You can find even more stories on our Home page. There, you’ll also find thoughts and questions by our community.
Take Me Home