4 Ways to Combat Mental Health Stigma in the Workplace

We all say things sometimes that aren’t exactly “politically correct.” I believe this is just part of human nature. But as the 21st century wears on, people are realizing the effects of their words more than ever. One area this doesn’t quite seem to be occurring fast enough though, is with stigma against mental illness. This can be a particular problem in the workplace because while friends may care enough to watch what they say, co-workers and supervisors don’t always “get it.”

Sometimes, it comes in funny lines and jokes that seem harmless.

My supervisor very kindly offered to get root beer floats for a difficult meeting, and a co-worker suggested we top them with “Xanax sprinkles.”

One co-worker reminded another co-worker to pack her “Prozac” for a stressful vacation, referring to chocolate.

One of the managers in my office said one day that he may just decide to check himself into a psych ward if things didn’t settle down soon.

During a stressful board meeting, the board members (all doctors) suggested they start making appointments with the psychiatrist on the board.

A co-worker just joked to me that if he wasn’t able to work from home on Fridays, he would just walk into traffic.

To some, this can all seem harmless — and perhaps if it was one statement by itself it would be harmless. However, it can take a toll if you are battling mental health struggles. I tend to go along with the laughter or sit uncomfortably while people make these jokes. My co-workers and supervisor are all genuinely caring and wonderful people, and I don’t think they would ever want to cause harm. However, sometimes these words and attitudes have a very real impact in my interactions with them.

These statements are why I do not disclose that I see a psychiatrist twice a week before coming to work. They are the reason I hide my Facebook posts from my co-workers. They are why I always take my meds secretly. The impact of keeping the extent of my battles a secret wasn’t even clear to me until I suddenly had to inform my supervisor I needed to take two days of medical leave and my attendance had been so spotty because of medical issues. Her shock revealed just how much I have hidden what I’m going through.

Last week, I had a panic attack at work. I was so intent on keeping this a secret from all of my co-workers that I tried to keep the hyperventilating and crying invisible. The effort caused my whole body to lock up, I had major muscle spasms and the excruciating pain just made the panic worse.

The stigma around mental illness is insidious and part of life everywhere every day. While the ongoing issues surrounding stigma towards mental illness are massive and this battle will occur over many months and years, everyday comments and actions can help combat stigma and open dialogue on mental health. Here are four things you can start doing at your job (or elsewhere) today:

I’m not suggesting you tell your boss or the board members to stop saying certain things, but you can easily respond to quips and jokes from co-workers with, “That’s not funny” or “Why would you joke about that?” or “Can we not say things like that, please?”

You don’t have to launch into a speech on why mental illness needs to be destigmatized. Simply making casual references to something about your therapist, mental health in general, self-care or mental health medications can go a long way.

Sometimes comments like, “I’m really tired today because my anxiety kept me up last night” can help. You can also mention a family member is dealing with mental illness and that you support them. Help people see how common mental illness really is.

4. Encourage a healthy atmosphere of positivity.

In all of the situations I mentioned when people made a joke about mental illness, people were under some level of stress and were struggling to find an adequate way to express themselves. I believe encouraging positive attitudes and healthy self-expression can help reduce the collective stress levels. You can encourage people to focus on the good aspects of life instead of the negative, which I believe is best for everyone’s mental health. 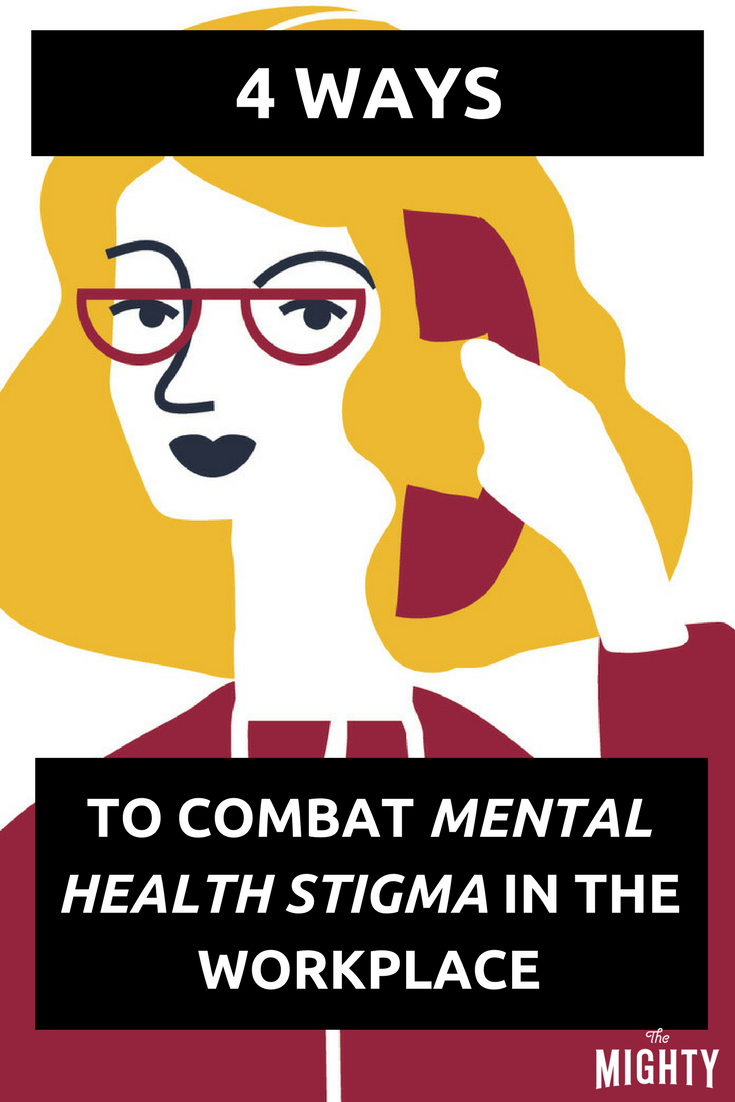 I’ve loved to write since I learned how to do so, and now I enjoy usimg my voice about mental illness &amp; stigma life with multi-faceted disabilities. I have struggled with Complex PTSD, anxiety and depression for a long time. I now also live with chronic pain and illness courtesy of Ehlers-Danlos Syndrome, POTS, etc. I am finding ways to cope and deal with humor, coffee ☕️, my service dog ????‍???? and by sharing my story.