“End the stigma of mental illness” is a phrase we hear again and again. But what does that mean exactly, and how does this “stigma” affect those who experience it? The word stigma technically means a mark of shame, and in the context of mental illness advocacy, we mean the unfair mark of shame others assign to us when it’s revealed we live with different mental health conditions or show symptoms. It can also be shame we assign to ourselves when we feel like there’s something wrong with how our brains work, and decide to keep hidden from others.

But this idea of “ending the stigma” only scratches the surface of the real shame, microaggressions and acts of discrimination people who live with mental illnesses sometimes face. To take the vagueness out of the conversation around mental health, we wanted to gather some examples of modern day mental-illness shaming to see what kind of work still needs to be done.

People in our community provided real-life examples, but we don’t want the conversation to stop here. Tell your story in the comments, or submit to us and tell us about a time you were shamed because of your mental health, and a specific way you think the problem could be fixed.

1. “Ten years ago, I was having gallbladder attacks (they had not been diagnosed as that yet, but that’s what they were). During a particularly bad one, I went to the emergency room… When the doctor came in, he didn’t greet me in any way or talk to me about what had brought me in that day. Instead, he shoved a clipboard chart in my face and barked, ‘What are these meds for?’ pointing to a list of my psychiatric medications (I was on several at the time). Startled, I hesitantly pointed to each medicine, answering, ‘That one is for depression, that one is for anxiety, and those are for psychotic features.’ He scoffed. ‘Psychotic features? What’s the problem? What’s wrong with you?’ He was getting louder at that point, and his wording and tone took me by surprise, so it was taking me a moment to answer. Apparently this frustrated him, so he shouted closer to my face than I was comfortable with, ‘What’s the diagnosis?’ Ashamed and horrified at that point, knowing other people could hear him, I looked down at my lap, tears in my eyes and my cheeks burning with embarrassment, and whispered, ‘Schizophrenia.’ The doctor didn’t say another word and left the room… To this day, thinking about this brings tears to my eyes and a fist of rage into my chest. I can still feel the ugly, horrible shame I felt that day. I felt less than human under that doctor’s gaze. This is why I’m so open about my mental health (and mental illness in general) now. Because awareness is how stigma ends. I should never have to feel ashamed like that again. Ever. And neither should anyone else.” — Monica M.

2. “I worked for a government department, and I broke my leg and needed time off work, about seven months in total. I was given the time off and my job was held open for me, no questions asked. A few years later I was gang raped and needed time off to recover, and my managers made it very difficult to the point I was forced to resign because ‘my recovery had no time frame.’ When I asked about why it wasn’t an issue when I broke my leg but it is with my mental health I was told that ‘people can physically see a broken leg but they can’t see mental injury so it is not a good look for the department.’” — Kirstie O.

3. “I was at the hospital trying to get admitted. The social worker looked at my chart, saw BPD (borderline personality disorder) and automatically thought I was there to seek attention. I tried to explain that I had a plan and intent to take my own life, and she dismissed it. I got discharged. So, I called my therapist’s office’s on-call number and they told me to go back to the hospital. I went and the social worker was so mad. She said there was no way she was going to admit someone who wasn’t an imminent threat to herself. She discharged me again. I ended up overdosing that night and was hospitalized for a week.” — Joselyne S.

4. “My old boss went through my purse and found my meds and looked them up and then told everyone at work what I take and why. And then they all started treating me poorly until I couldn’t take it anymore and quit.” — Alyse W.

5. “I was out shopping with my friends, and afterwards while out to dinner, one of the moms told me I was ‘too depressing to be around.’ It really messed with me and made me internalize my depression and feel like the world would be better without me more than I already did. I was only in eighth grade. I’m an adult now, and it still hurts.” — Kelsey M.

6. “To put it simply — I am a skin picker (amongst other disorders). A few years back I was in a terrible state of depression and anxiety and was admitted to hospital. While in reception, I was seen to by a (male) nurse who was getting all my details and doing my admission before seeing a doctor. He didn’t even look up from his folder and said, ‘So when was the last time you used?’ I said, ‘Used what?’ He replied, ‘Used meth, ice, we’re not blind, girlie.’ I said, ‘I pick my skin, it’s an OCD/anxiety problem.’ He then started pulling up my sleeves, my pants, taking my shoes off… Looking for injection marks. I curled up into a ball on my seat and told him him I do not do drugs. I was then put into an isolation room for being ‘belligerent.’” — Amy B.

7. “I tried to go to a concert with some co-workers years ago, but I had an anxiety attack instead. So one of them drove me to my car. Afterwards they never asked me how I was and never invited me anywhere again. That really hurt.” — Deb B.

8. “I am a student at a state university, and I have accommodations because of my mental illnesses so I can hopefully perform at the same level as other students. One of my accommodations is a need for a separate testing environment to avoid a stressor that causes extreme panic attacks that will land me in the hospital for a day or two. Every semester I run into at least one professor who will tell me I should at least try to take the tests in the classroom and disregard most of my accommodations. Last semester I had several professors do this. One even went so far as to flat out deny my accommodations and when pressured, admitted to the department chair they didn’t like people who have accommodations because it meant they had to follow someone else’s rules (i.e. student disability services). The head of student disability services had to contact the professor and force them to follow my accommodations, but I ended up having to drop the class due to the sheer number of panic attacks that were landing me in the hospital weekly.” — Ashley D.

9. “An old live-in landlord saw my antidepressants on the bedside table in my room (God knows why he was in there anyway). Then confronted me and said, ‘I’m uncomfortable living with someone who is mentally ill. Get out.’ That was a lovely experience…” — Kahla D.

10. “Anytime you disagree with someone who knows about your mental illness, the first thing out of their mouth is, “Oh my God, are you off your meds?” or “I think you need new meds.” It’s infuriating. I already feel so out of place as it is; someone who supposedly loves you should never ever react this way!” — Jennifer Leal

11. “A post of mine about mental illness went viral (36,000 shares, featured on The Mighty and several national newspapers). But a lot of people went onto my profile and saw I worked as a children’s entertainer and contacted my work and told them they didn’t want someone like me near their kids. I was fired. [My boss] told me she couldn’t have someone like me near kids in case I thought one turned into a monster and I killed them. I have schizoaffective disorder, and I can assure you I would never work if I was not feeling well… This story actually has a happy ending though. After I told Facebook I had lost my job because of my mental health, I received five or six job offers from rival companies.” — Sophie E.

15. “I’m a schizophrenic and I have PTSD. I can see the different looks I get when people find out about it… and they start treating me differently like I’m a walking bomb or someone who’s ready to go on a bloody rampage. It hurts me so much because I’m here struggling to find the right treatment while they accuse me of being a monster.” — Ayu S.

16. “I was diagnosed with bipolar disorder my senior year of high school. And some of the kids I’ve been in school with since kindergarten avoided me. Later I found out they thought they could ‘catch’ bipolar disorder from me like you ‘catch’ a cold.” — Lorissa J.

17. “I’m bipolar type II. I tried to go on a mission trip during a summer in college and the guy made me jump through so many hoops… I had to get a letter from my therapist saying I was stable, and even after that he rejected me and told me it would be the safest option for everyone if I just didn’t go.” — Laura S.

18. “Not me, but my husband. We wanted to host a foreign exchange student but were denied because my husband has had one, just one, hospitalization for 24 hours because he needed an emergency med adjustment. Now he has been stable for a year and we keep getting denied from every single exchange program because of it. What’s worse is he is a nurse and I am a mental health counselor.” — Kayla M. 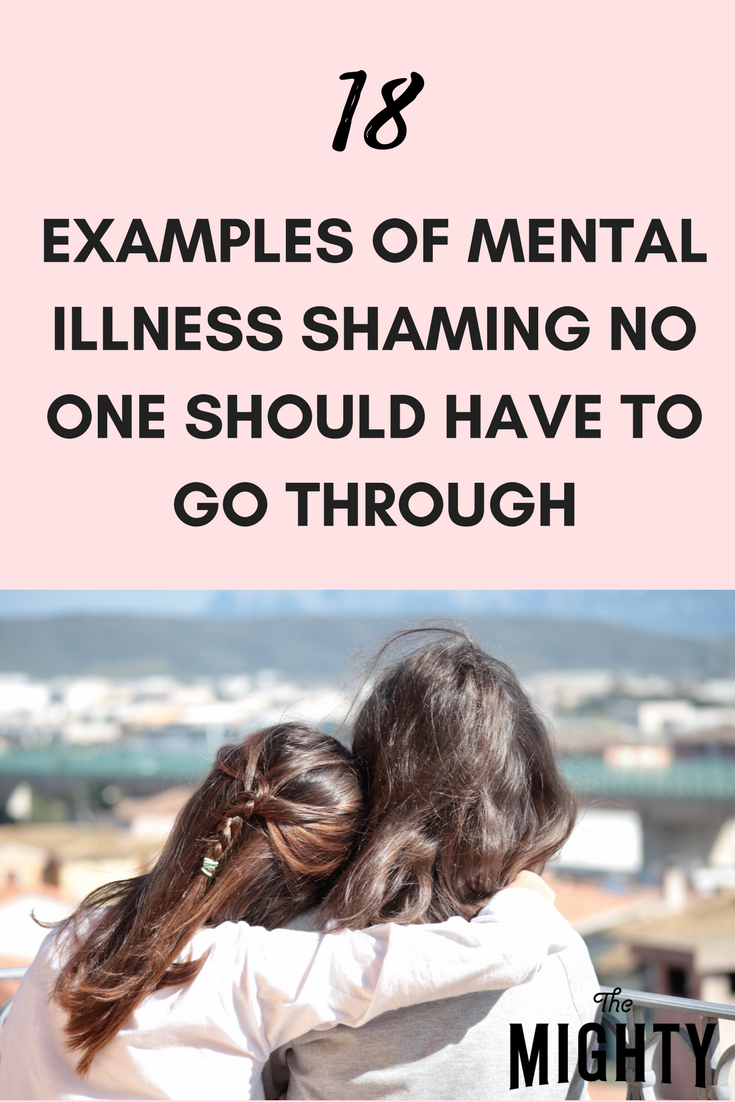