The 22 Worst Parts of Having Multiple Mental Illnesses

For some, a mental illness diagnosis comes with answers and relief. Behaviors and thoughts you maybe couldn’t understand before can be explained, and (hopefully) you’re given some treatment options to help you find a little mental peace.

When you’re diagnosed with more than one mental illness though, the answers can become less clear. It can be hard to tell where one starts and the other begins — making taking care of your mental health a little messier. To explore this, we asked people in our mental health community who have been diagnosed with more than one mental illness to share one of the “worst” parts of their experience.

What helps you cope multiple mental illnesses? Join the conversation below. 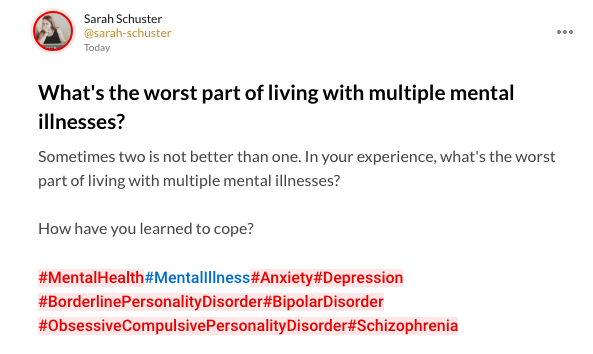 Read the responses, and reply yourself.

Photo by pawel szvmanski on Unsplash