How Utilizing Both Eastern and Western Medicine Impacted My OCD

I got really sick at age 20. It wasn’t the most common experience when I tried to tell my peers what was going on with me. However, now that I know more eight years later, I am aware that this is a common age for mental health issues specifically to surface. With both a heavy family mental illness history and personal trauma in my background, it was unfortunately a strong possibility for my brain to go haywire at some point in my life. Still, I hoped for the best and did what I could to remain calm and present, until there was a reason not to.

I will never forget, as many times as I’ve tried, the night that I started to experience rapid-fire intrusive harm thoughts. Though there is no real logical explanation for obsessive-compulsive disorder (OCD), other than that the brain is misfiring, to be actively in that experience was the most terrifying few years of my life. Before treatment became ultimately helpful for me, I stopped eating and sleeping for months on end. I was horrified to see these constant, scary images in my mind. I had lost my capacity to think freely. I watched as most of my friends spent their free time taking recreational drugs to “have an experience” at weekend concerts. I was so jealous. If only I could stop having this altered experience that my brain was producing on it’s own. It was one bad trip, except it never stopped.

I had no clue what was happening to me. I wasn’t a neat freak. How could this be OCD? Media distortions have unfortunately put one of the most debilitating mental conditions into an ironically inaccurate and seemingly humorous box. The truth is, OCD starts with some form intrusive thoughts misfiring in the brain. How the compulsion aspect of the illness looks is up to the unique patient’s flavor of OCD. There was nothing funny or entertaining about this. I felt completely unable to function, and it was exhausting trying to find a treatment that worked for me, as the standard SSRI and ERP therapy (exposure and response prevention, specifically designed for OCD) did not take for my personal experience of hell. 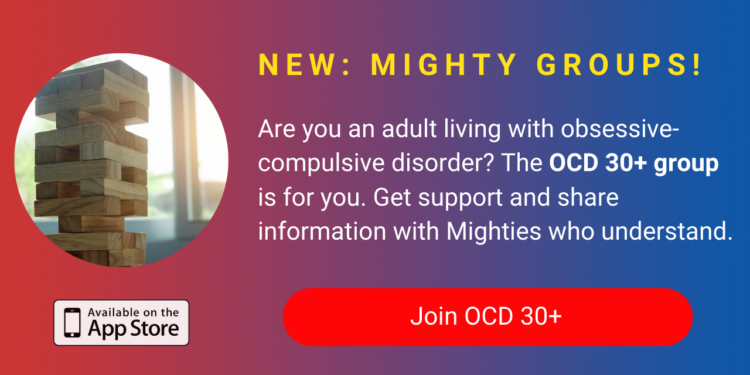 So here I am, dropped out of college, in a fight for my life with this illness. Instead of compassion or a sense of understanding, I received a lot of crap from the majority of the people in my life.

“Just be positive,” and the list goes on…though I’m sure many of these people in my life somehow meant well with these comments, I would literally be dead had I listened to them. Sometimes there is nothing more invalidating than to be experiencing something that the majority of people can’t see, or somehow don’t believe in. Everyone has their two cents of how they orient in the world, and unfortunately, it seems that the people talking the loudest against the mere existence of severe mental illness and the need for certain patients to take medications, tended the be the people who had no severe diagnosis of their own, and therefore needed to shut the fuck up.

I was particularly fed up with my hippie community, as I received a constant chorus of “Have you tried psychedelics?” The ableist privilege of imposing psychedelics onto someone who already experiences a debilitating intrusive thought disorder in a sober state was baffling to me. Here I was, trying antipsychotics in an attempt to have a clear mind again. Here were my friends, casually fucking around with acid and shrooms, making fun of me as being “closed-minded for buying into big pharma.”

There are many forms of privilege. I would love to have the privilege to have the kind of mind that would allow me to experiment with psychedelics without potentially deathly consequences. But I don’t, and I’m so very tired. I’m so tired of having to educate the people around me that mental illness is real. I’m so tired of defending my “decision” to take medication, when the decision for me was between that and literal suicide.

We can do better. We can be more supportive and stop acting like we have all the answers from our limited lens. We can erase the stigma around talking about this stuff, which forces people like me to live their lives hiding in shame. We can hold the hope that everyone has a different path to healing, and that there is no “one way” that will work for every individual. My way has actually included everything, not just the medications I finally found that worked for me. I incorporate a lot of spiritual energy healing and meditation into my daily life. My “integrative” doctor thought that was too woo-woo. The East needs to stop fearing the West, and vice versa. There is much medicinal wisdom on both sides, and this is not a battlefield.

This is a grounds for learning what works for us. And I would not be in the functional and generally happy state I am in today without both ends of the Eastern-Western spectrum fully at play in my healing.